Back is far more than an attempt to recapture the magic of Peep Show. Episode 1 sets up a solid base for a potentially brilliant sitcom.

Mitchell and Webb are back for another Channel 4 sitcom. I was originally going to start this review by wittily pointing out that the show is fittingly titled Back, but Channel 4 beat me to the punch with the majority of their marketing. Instead, I’ll just point out how great Episode 1 is.

It’s been a year and a half since the critically acclaimed Peep Show came to an end, so it’s been a dark time for fans of Mitchell and Webb. While they’ve both continued to appear separately, there’s something special about their dynamic together. Whether they’re Digby Chicken Caesar and Ginger from That Mitchell and Webb Look or Peep Show’s Mark and Jez, the duo’s personalities bounce off each other effortlessly. This certainly remains true in Back, but creator Simon Blackwell makes the effort to separate his characters from our traditional understanding of the pair. 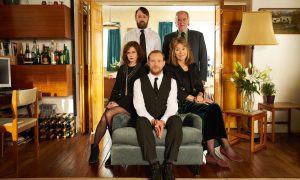 After the death of his father, Stephen (Mitchell) is fully prepared to take over the family pub, but the sudden reappearance of his foster-brother Andrew (Webb) threatens his long held dream. While Stephen struggles to remember anything about his foster-brother of a few months, Andrew vividly remembers everything about his short-lived adoptive family. He’s quickly able to charm his newfound relatives, but it all seems a bit suspicious. It’s a far more complicated premise than Peep Show, so I hope Back capitalises upon it and commits to a stronger overarching story.

Episode 1 dedicates little time to fleshing out the series’ supporting characters, but it’s all in service of establishing our two leads. Although Mitchell maintains the familiar glib personality of his Peep Show incarnation, Webb is radically different from what we’ve seen from him before. Unlike failed lawyer Stephen, Andrew has actually made something of his life. This means that Mitchell retains his Peep Show hopelessness in the face of Webb’s new ambition and charisma. It’s this subtle change to their dynamic that helps separate Back from previous Mitchell and Webb outings. 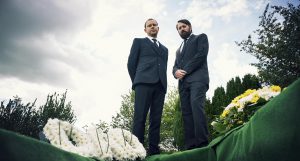 The show manages to mark itself from similar odd couple sitcoms through its interesting use of flashbacks. Andrew and Stephen remember events from their childhood differently, so we’ll often see two versions of a scene to reflect both memories. While Andrew remembers their father bursting in and announcing a trip to Chessington, Stephen recalls being told to clean the pub drains. Matthew Holness does a great job as their late father, and his relationship with his son is something that’s screaming out to be explored in later episodes.

Episode 1 builds a solid base, but it’s more exciting to consider how much room Back has to grow. It’s entirely possible that it could stagnate if it becomes overly episodic. However, if it maintains this momentum, Channel 4 certainly haven’t seen the back of Mitchell and Webb.