Read more
You are at:Home»Culture»Review: Aladdin at the Prince Edward Theatre
By Bruno Russell on September 7, 2017 Culture, Theatre
60%
60
Inconsistent

Trevor Dion Nicholas shone as the camp Genie with personality and vigour, but he single-handedly saved this magic carpet from crash landing.

The spectacle of Aladdin was always going to find it hard to adapt for the West End. It’s certainly a go-to choice for pantomimes each December, but here you can’t rely on crass humour or audience participation to save a weak plot and underwhelming musical numbers.

In some ways Aladdin achieved the feat: the lyrics – the work of Howard Ashman and Tim Rice – were good, and memorable numbers such as ‘Friend Like Me’ and ‘A Whole New World’ were well known by the audience. Trevor Dion Nicholas also shone as the Genie, proving he thoroughly deserved his What’s On Stage award for the role. Everything else, though, suffered. An overbearing costume and set design, an Aladdin without enough umph, and a villain that couldn’t decide his own characterisation left the performance in trouble. On this occasion, the cast needed one wish and that was for the Genie to save the day. Luckily, he did. 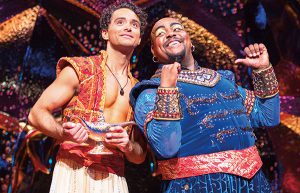 Lets start with Nicholas. He transformed the role of the Genie in to camp, vibrant personality which not only had an impressive voice but heap-fulls of personality alongside it. His performance of ‘Friend Like Me’ (which you can listen to the cast recording of below) was absolutely exceptional. I’ve never given a standing ovation to a single musical number before, but this time I did. The lyrics were cleverly adapted to be fun and energetic and Nicholas performed them with ease, while also performing some tight and challenging choreography. For this performance, he was a dream (or wish) come true (okay I’ll stop with the attempts at genie-related humour now). What stood out beyond anything was his ability to command the auditorium; to grab people’s attention and sustain it. Its clear why he came over from Broadway; casting anyone else to perform the role as well would be difficult.

I’d hope, given this, that the show would receive four, maybe even five, stars. Sadly, though, this isn’t the case as the rest of the cast didn’t even nearly reach the high bar set by Nicholas. Lets start with Aladdin, played by Matthew Croke. The main problem here is that Aladdin is meant to represent a cheeky-chappy innocence that makes him so lovable. Instead, all I got was a slightly annoying adult that hadn’t matured. Making the genie more camp and innocent means Aladdin’s own characterisation needs to be even stronger. Although that’s certainly possible, all that happened here was that Aladdin was left in the dust Sadly, also, on the night he didn’t quite nail his performance of ‘Proud of Your Boy’. His voice seemed to strain when attempting to hit the final note. The same is semi-true of Jade Ewen’s Jasmine. While her vocal was accomplished, it didn’t have the forceful effect it needed. This mean that Ewen and Croke’s performance of ‘A Whole New World’ – the defining moment of the play – fell flat. It didn’t reach the vocal heights it needed either. While it was controlled well, it was one-dimensional. 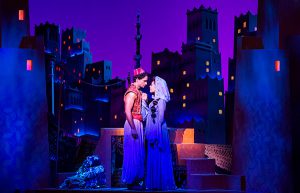 Then we move on to the villain of the production: Don Gallagher’s Jafar. Part of the issue here is escaping the pantomime feel. Gallagher, therefore, could not make the villain too pantomime-esque. At the same time, he didn’t want him to be too serious and make the play seem dark. So what we had was just a little messy. He had the classical pantomime laugh, but not the audience interaction, he had some cruel moments, but then attempted to add a comic element. The characterisation got completely lost. I think it’s because Gallagher isn’t right for this type of role: I would like to see Craig Revel Horwood take it on. I think Gallagher would be better going full-pantomime in a different version of the production. He did well – the role held itself – but did not give the villain this performance needed.

Someone also needs to have a word with set and costume design. Now I like sequins dresses and colourful garments as much as the next slightly camp man, but this performance had enough to fuel a whole series of Ru Paul’s Drag Race and still have a yard of yellow fabric to spare. Essentially: it was too much. The stage ended up just becoming a visual attack on the eyes and nothing stood out. In fact, the best part was the magic carpet scene with the black night-drop. These shows need colour and vibrancy, but they also need balance. The same holds for the sets The cave is meant to be the luxurious set, but you’d be forgiven for not realising this given how over-the-top some of the others sets were. Sometimes, less is more.

Aladdin has a lot of potential. But certain things need to be worked out for me. Jafar needs to have a more consistent characterisation that works against the play. Aladdin and Jasmine need to provide a more defying vocal. The whole thing needs a little bit more control and finesse. I would have given this two-stars without Nicholas’ performance as the Genie. His performance alone deserves five-stars and a standing ovation. Overall, then, it gets three. But the rest of the cast best take note of Nicholas and take a leaf from whichever book he is reading.

Aladdin continues at the Prince Edward Theatre indefinitely. You can buy tickets here.