Read more
You are at:Home»Culture»‘A Voice of A Generation’: Why Lena Dunham’s Girls is Must-Watch
By James Barker on August 12, 2017 Culture, Features, Television

I briefly mused with attempting to call Girls a ‘Hidden Gem’, but awarding a Golden Globe winning show with that title might be a step too far. But it’s an injustice that Lena Dunham’s acclaimed series is so unknown in the UK (unless you’re lucky enough to own a Sky Atlantic subscription). Mention it and people will most likely murmur something about Dunham’s troubled public image, or the show’s various controversies with both nudity and ethnic representation. Both of those things are regrettably true of Girls, but reducing this revolutionary comedy to its issues does it a massive disservice.

Dunham created, wrote and starred in Girls, a HBO-produced comedy series that ran for six seasons between 2011 and April of this year, so predictably it’s a show entangled with her as an individual. No stranger to controversy, Dunham’s been criticised for her behaviour and opinions; the very same behaviour and opinions that often drive the narrative of Girls. Her central character Hannah – a narcissistic writer trying to make it in New York, played by Dunham herself – is the spit of her creator. But Girls never attempts to make Hannah a likeable character, instead creating a realistic anti-hero that some grow to love and others choose to endure for the refreshing comedy that’s sketched around her.

There are few moments in Girls that are laugh out loud. It instead embraces the Louie-esque style of cringe comedy that’s increasingly popular to engross its viewers. There’s heartbreaking moments often, but usually the characters bring their misfortune upon themselves. Though Hannah is undeniably morally skewed, she’s in good company: best friend Marnie (Allison Williams) is possibly the most terrible human ever written, self-absorbed to the extent that she fails to notice her husband’s addiction to prescriptive drugs throughout two years of marriage. Jessa (Jemima Kirke) is a close rival, constantly fleeing all responsibility and compromising her friendships. Most interestingly, we watch the girls corrupt poor naïve Shoshanna (Zosia Mamet), who comes to the conclusion pretty early on that she dislikes her friends but keeps them around anyway. 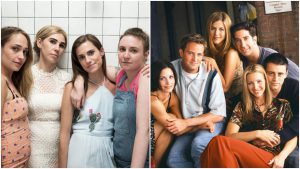 I realise I’ve painted a picture few would want to see, the absolute antithesis to the worshipped friendship groups of Friends or How I Met Your Mother (comedies similarly concerning young people growing up in New York). But Girls strives for realism rather than idealism. These women are just getting by, financially and emotionally, constantly battered by the city they live in. Similar to the brilliant Aziz Ansari’s Master of None, Girls is woven onto the rich tapestry of real New York, unlike those aforementioned sitcoms (neither of which ever filmed in the Big Apple). They are modern ‘Millennials’ for all their faults, slaves to fake nicety, sexually liberated, and unashamedly going it alone. A lot of their problems can be attributed to men, too. From Hannah’s booty call romance with Adam (Adam Driver) in Season 1 to her Season 6 fling (Riz Ahmed) who confesses he has a girlfriend two days in and expects Hannah to be fine with it, the morally complex characters don’t end with the girls.

There’s many other elements to be praised: Adam Driver is in full pre-Star Wars glory as the deeply disturbing yet unabashedly loveable Adam, and there are golden guest appearances from the likes of Richard E. Grant, Gillian Jacobs, Corey Stoll and even Patrick Wilson. There’s also Dunham’s largely sensitive approach to serious issues, including Hannah’s obsessive compulsive disorder, where she toes the line between the dark and the comedic expertly. With the help of co-executive producers Jenni Konner and Judd Apatow, Dunham pens some remarkable standalone episodes of the course of the six seasons. Watch out for Season 3’s ‘Flo’, where Hannah reconnects with family in Michigan, Season 5’s ‘Japan’, a brilliant depiction of life in Tokyo, and Season 6’s ‘American Bitch’, a disturbing analysis of a male power complex. They recognise there’s art to a smaller story, leaving the show often feeling more theatrical than televisual.

Girls – and Lena Dunham – is far from perfect, but that’s the show’s success. At the climax of its pilot episode, Hannah muses “I really think I might be the voice of my generation… or at least a voice.” Remarkably, it’s a mission that Dunham succeeds at by depicting Hannah’s failure. Raw, rebellious and refreshing, Girls has paved the way for genius works including Master of None, Judd Apatow’s Netflix series Love, and even the BAFTA-winning British comedy Fleabag. It’s rare to love to hate something this much.