Although there were worries about Wicked's new cast, they provided a masterclass in theatre with outstanding vocal performances and character development.

Wicked is one of London’s biggest west-end musicals of all time, having just celebrated ten years at the Apollo Victoria Theatre, and being named the second highest grossing theatre production of all time, behind The Lion King. As a brand-new cast take over the production, nerves were therefore high. Alice Fearn as Elpheba, however, showed exactly why Wicked is world-renowned. The new cast gave an energetic, tight and vocally flawless performance. This might be the best Wicked has been since Idina Menzel originally took the famous role.

First, let us begin with Alice Fearn. Taking the role of Elpheba is the most ambitious role for any West End performer. Fearn’s vocal was simply outstanding: she mastered the Defying Gravity moment and made those incredible notes look easy. She gave a very confident and mature performance. The only slight negative is that during her number ‘No Good Deed’ the wickedness that ought to be displayed in that moment did not really come through. Fearn was not quite wicked enough in the moment. This, however, should not take away too much from her mastered performance of such a challenging role to play.

Not only Fearn impressed. Sophie Evans encapsulated the generosity of the Glinda the Good perfectly. She started off with an attitude that slowly evaporated throughout to reveal the goodness famous of the role. She provided a well-rounded multi dimensional character that the audience could relate to and sympathise with. Another highlight was Martin Ball as the animal-teacher Doctor Dillamond. He evoked emotion and made the animal abuse storyline feel real. The whole cast should be congratulated though: there were no weak vocal performances, no problems of diction which often come from choral numbers, the choreography was synced well together and not a single line was dropped. The new Wicked cast are ready to prove what a master class in theatre looks like!

Above the cast, the show is also made by the outstanding costume and set design which really takes you to the world of Oz. Having been based at the Apollo for eleven years, incredible work has transformed the theatre into Oz, from green lighting outside the theatre, a huge mechanical dragon at the top of the stage, staircases built into the set and outstanding pyrotechnics. It is often said that theatre is a form of escapism and Wicked played on this perfectly. This was bolstered by the incredible costumes, which – though very Alice in Wonderland-esque – managed to mix the fantasy with Oz with a subtle realism. Glinda’s dress was a little too pantomime for my liking, but the remainder were creative, without being OTT. This meant that while the whole stage looked visually spectacular – especially given Elpheba’s body-covering green makeup – the visuals did not outdo the story itself, as with other production I have seen. 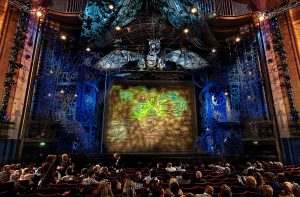 The lighting and sound achieved the same. It would be easy to overdo Oz with constant bright, multi-coloured lighting. Instead, they used shock lighting at key moments (for example the green smoke during ‘Defying Gravity’) while at others kept the lighting simple and understated. On this instance, everything was balanced with perfection. The band were excellent and (thankfully) this is the first performance I’ve seen in a while which managed to control the sound so that words were not lost during different scenes!

I’m not a fan of five-star reviews, and it takes a lot for me to reward them, but if this does not receive the highest rating, I’m not sure what ever will! This review has found it hard to raise criticisms, and that is a sign to the quality of the performance. People worried that a new cast may cause problems. All I can say is that there is no need to worry at all. This cast literally defied gravity!