The Lannisters are the true winners of 'The Queen's Justice' as Daenerys and Jon's first encounter hits the rocks.

It’s taken an amass of around 63 hours for Game of Thrones to reach tonight’s episode. The show’s been gradually interweaving its many plot threads for several seasons now, but ‘The Queen’s Justice’ finally brings together Game of Thrones‘ greatest players: Daenerys Targaryen and Jon Snow.

It would surely seem bizarre to a non-Thrones fan that it’s taken more than three quarters of this epic story for its two most important characters to come together. It would probably seem insane then that, after a first meeting fraught with tension and disagreements, an alliance is far from the cards for Jon (Kit Harington) and Daenerys (Emilia Clarke). But then you must remember what show you’re watching – Game of Thrones offers no guarantees to its viewer, and even the slightest sign of a thaw between Ice and Fire is practically orgasmic for fans of the show. 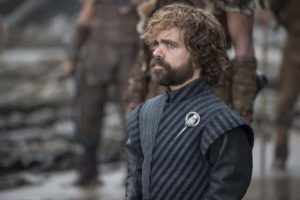 Saying that, one might have expected more fireworks – or dragonfire – when Daenerys and Jon finally occupy the same room. David Benioff & D.B. Weiss instead construct a dialogue-heavy debate between the Dragon Queen and the King in the North, which allows for some zinging lines but ultimately leaves the viewer feeling just a little cheated. This is a definitely a prologue for the two characters, with the spoils of war still to come – whether that be fighting against each other or standing together.

It’s a joy as Thrones finally pushes Tyrion back into the spotlight. His relationship with Dany is already fascinating, and his connection with Jon – a character he hasn’t shared screen time with since Season 1, Episode 3 – is no less riveting to watch. Reunions like these are where the 63 hours of plot meandering feel worthwhile. Peter Dinklage shines as the bridge between these two young rulers, the voice of both wry wit and wisdom, and gives us all hope for an alliance later in the season. 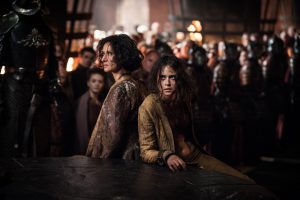 But while the meeting between Jon and Dany might seem frustratingly predictable, there are plenty of surprises afoot elsewhere. The true winners of ‘The Queen’s Justice’ are the Lannisters, with Cersei’s quest for vengeance finally quelled when Euron Greyjoy (Pilou Asbæk) gifts her with the captured Ellaria Sand (Indira Varma). Like Arya’s actions in wiping out the Freys earlier in the season, Cersei’s malevolent revenge is reflective of an iconic death in a previous season but with a new horrific twist mixed in. Lena Headey is fascinating to watch in her layered approach to Cersei’s evil, her performance both propelled by emotion but somehow devoid of humanity.

We’re also treated to visiting not one but two long mentioned locations in Westeros. Grey Worm (Jacob Anderson) and the Unsullied swiftly capture the Lannister seat of Casterly Rock, while Jaime (Nikolaj Coster-Waldau) conquers the Tyrells’ castle of Highgarden. The bait-and-switch nature of the battles suggest that the Lannisters are more formidable enemies than anyone expected; Daenerys’ journey to the Iron Throne doesn’t look quite as inevitable now. Diana Rigg’s final scenes as Olenna Tyrell prove as legendary as her acting calibre. She demonstrates one final time to be far from a cuddly old woman as confesses her part in Joffrey’s murder to his startled father, leaving Jaime clearly stunned by the venomous final words of someone he’d just spared a painful demise.

In the North, Sansa (Sophie Turner) is proving to be a formidable leader in Jon’s absence. The presence of Littlefinger’s whispering is still a cause for concern, but surely a reunion with her brother Bran (Isaac Hempstead Wright) spells an end to any possibility of Sansa betraying her family? Again, we must be cautious to remember what show we are watching. In Sansa’s own words: “When the snows fall and the white winds blow, the lone wolf dies, but the pack survives.”

With brilliant writing, acting and directing all round, ‘The Queen’s Justice’ is the advancement in story and action that Season 7’s needed. With the meeting of Jon and Daenerys, the Song of Ice and Fire is finally being sung – so while its chorus is still to come, this is truly a momentous day for Game of Thrones fans.

Game of Thrones continues next week with ‘The Spoils of War’. See a teaser below.