A solid, if slightly rushed start. There's so much going on, you won't know where to look.

Midnight, Texas is a new supernatural series is based on Charlaine Harris’s bestselling trilogy of paranormal novels. Harris is the same writer responsible for authoring the wildly popular novels which spawned seven seasons of lusty vampire hijinks in True Blood.

Syfy’s Midnight, Texas follows Manfred Bernardo, played by François Arnaud. He’s a psychic on the run Hightower, a man seeking sanctuary at the behest of his dead grandmother in the quiet town of Midnight. However, contrary to Manfred’s initial expectations, the sleepy town is anything but. The unusual residents leave him reeling as his life is further complicated by a ghastly murder, and a host of ghosts that refuse to leave him alone after he summoned them into his home. 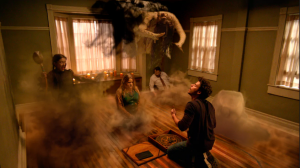 With a spiritual possession, a vengeful dead husband and Manfred’s dead grandmother all making an appearance in the first five minutes, the episode is somewhat disorientating with so much happening. This rapid-fire pace only gets worse as the episode goes on, the medley of curious characters are all introduced in quick glimpses and fleeting encounters which leave the viewer with only a partial understanding of who everyone is. There’s a winged tattoo artist, the constant presence of Lemuel the vampire, Fiji the witch and her talking feline familiar, Olivia the assassin and the sudden (and somewhat random) love interest, Creek. It can’t be said that this first episode doesn’t leave you intrigued and wanting to know more about these odd creatures who choose to hide away in this little Texas town. However, with Episode 1 such a roller coaster of events, I can’t help but wonder how this pace will be maintained throughout the remainder of the series. Or, will viewers see it plateau after such a busy start?

While how the series will play out isn’t entirely clear yet, the pilot episode does a good job of establishing the crux of the story as we see Manfred quickly embroiled in helping to solve a murder and return the quiet town to its formerly subdued state. Manfred’s psychic abilities that allow him to communicate and see the dead – as well as be possessed by them – also reveal themselves dramatically. The other strange residents don’t get much screen time to showcase their own talents but the episode hints at more drama to come with the were-reverend ominously mentioning the approaching full moon near the end of the episode.

In spite of the somewhat wild start to Midnight, Texas, so far it’s an enjoyable show that doesn’t take itself too seriously. This episode is a promising start to the series that looks to be packed with supernatural drama and intrigue, a murder mystery, and a shadowy enemy.

Midnight, Texas airs on Thursdays, at 9pm on Syfy.