Moffat's and Capaldi's penultimate episode doesn't quite live up to last week's spectacular, but it gives an explosive effort.

The highly coveted season finale of Doctor Who is a hard one to tackle. How best do you pull off  yet another finale in a show that has become famous for its explosive, emotional, and often heartracingly realised endings? For every ‘The Parting of the Ways,’ there’s a ‘The Name of the Doctor’; for every ‘Journey’s End’, there’s a ‘Death in Heaven’. It seems that the well thought-out, juicily satisfying finales of the R.T.D era cast a long shadow over the confused and often muddled climaxes of the Moffat epoch. Moffat’s ideas, somehow, seem to work in theory, but only manages glimmers of the explosive conclusions they promised at the outset. ‘A Good Man Goes To War’ and ‘The Wedding of River Song’ – Season 6’s mid-season and end-season finales – did everything they were meant to do: tie up the series’ loose ends, solve the series’ ongoing mystery, and manifest an emotional culmination of the series’ themes and characters. Still, along the way, they muddle themselves; made over-complicated and risk alienating baffled viewers. See, RTD’s Bad Wolf arc was genius; subtle enough to run through the whole of the first series, it still allowed for a realised and climatic ending, plus carving itself an opportunity to return three seasons later. Moffat, whilst subtle enough for the odd episode  (‘Blink’, ‘The Empty Child’/’The Doctor Dances’, ‘Silence in the Library’/’Forest of the Dead’), constantly finds himself trapped in single-episode-syndrome, attempting to recreate the mystery of one or two episodes into an entire arc, usually muddying it and losing emotional impact in the process. 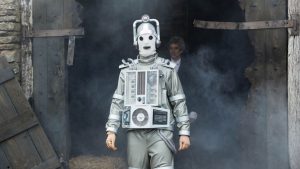 In his penultimate episode, Moffat chooses to switch direction a little – though I can only assume unintentionally. The episode is key for Bill (Pearl Mackie), who up until this point has excelled as a Capaldi-era companion. It’s difficult to imagine her  standing at the TARDIS helm beside the 10th or 11th Doctor, whose combined childishness and charm wouldn’t meld as well as it did with Rose, Martha, or even Donna, all needing the Doctor to grow as their own person. Bill and Twelve (Peter Capaldi) need each other very little, choosing instead to indulge in their own fascinations and friendship, which occasionally, and very sweetly, intertwine. Here, Bill stands with the Doctor as Mondasian Cyberman, slowly and painfully getting to grips with her new form. While not the first companion he couldn’t save, I’m still tempted to say this might be the most bitter way the Doctor has lost someone, simply because they needed each other so little, and because she lived as Cyberman when she was already as Human as possible. The gradual reveal of her new form by combining the perception of herself with the perceptions of the scared adults and children across the farm is a credit to Moffat’s and veteran Who director Rachel Talalay’s true skill, and made for the episode’s most emotional pitch. Which makes it such a bloody shame that Moffat’s dismal need to include a startling twist ruins the punch it aimed for.

As Bill cries over the Doctor’s apparent dead body, the episode reintroduces Heather from ‘The Pilot’ (yeah, I forgot about her too) to transform her back into her human form and offer her the chance to explore the universe by her side. I’d like to remind avid viewers that this is a girl she spent about 2 hours with literally over a decade ago in Who time. Still, she swiftly takes the offer up – à la Clara and Me (I smell a crossover…) – in a scene that wouldn’t have been completely dry of emotional impact had the tears motif or Heather herself been mentioned anytime between the first and final episode. Why are we ignoring the brilliance of Bad Wolf or the unassuming drums throughout Season 3? This isn’t emotional, this is tacked on trash that ruins a spectacular character arc, damnit. 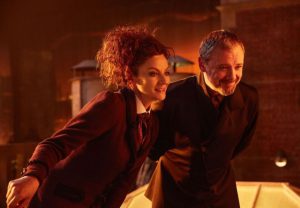 Which brings us to Missy (Michelle Gomez) and the Master (John Simm). There is little to criticise about the actual pairing, which balloons with chemistry and complexity. Perhaps the thickest string running through the series is the Missy’s apparent growth and the expansion of her and the Doctor’s friendship, and nowhere is this more apparent and more impassioned than ‘The Doctor Falls’. Which, let’s be honest, could be credited to the absolute ineptitude of her sudden change of heart throughout the season, clumsily written and awkwardly placed, but also has its roots in her doubling with her former, infamously maniacal self. ‘Are you getting…empathy?’ The Master splutters in disbelief as Missy repeatedly refers to Cyberman Bill as ‘her’ instead of ‘it’. Although tiresome to write Missy’s growth arc in relation to her becoming the victim of The Master, she has her moments which shine above any of her other appearances. And whilst Simm proves to be, without a doubt, the best element of the two-parter, this 10th series version of the Master pales in comparison to the R.T.D ‘End of the World’ spectacular. But please, while it offers to nice parallel between the pair and the Doctor/Bill, don’t get me started on that shoddy Missy/Master ending.

Honestly, the only things worth criticising in ‘The Doctor Falls’ are those two endings, less climaxes than open-ended cop-outs disguised as opaque resolutions. The rest, so incredibly character based and gladly so, gleams with proficiency and fervour. The 12th Doctor, who, in the 8th series hid from compassion, loudly re-embraced it in the 9th, and utterly and fully embodied it in the 10th (see yet another wonderful monologue about the necessary pointlessness of kindness), is unwilling to change, and justly so. Regeneration in Doctor Who has always been more of a plot point than a potential character-arc, but his refusal to change again poses more of a salacious impasse, and one I’m sure will be rampantly explored in the Christmas special  (also featuring David Bradley as the 1st Doctor). Although wildly heaving around the TARDIS trying to curb his regeneration whilst spluttering the last words of his predecessors – “I don’t wanna go!, ‘I’ll always remember when the Doctor was me’ – reeks of shameful self-eulogy, the tributes to companions been and gone, now a norm for Who regeneration finales, are always a satisfying bonus. Plus, the constant and unashamed references to the next incarnation being a woman is great. It’s so great. Roll on Christmas, and roll on 13!

Missed an episode of Doctor Who? Series 10 is available in its entirety on BBC iPlayer.