Read more
You are at:Home»Culture»Review: Ever Oasis
By Josh Nicholson on July 2, 2017 Culture, Video Games
80%
80
Charming

Ever Oasis defies genre. While it initially feels like a simple town simulator, the charming 3DS game quickly opens up to reveal a deep RPG style adventure. With obvious inspiration taken from both Animal Crossing and The Legend of Zelda franchises, Grezzo’s latest game has the potential to become a classic Nintendo series. While it isn’t without its problems, Ever Oasis is an excellent release late in the 3DS’ lifecycle. 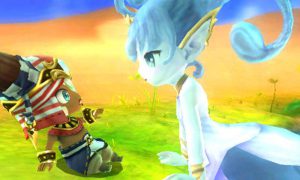 Taking on the role of a young Seedling, you’re asked by a Water Spirit to grow and nuture an Oasis in the vast desert. It begins as a small patch of grass, but it quickly develops into a small town after you begin inviting travellers to move in. While each traveller has some criteria to meet before they become a resident, it usually revolves around a simplistic item gathering quest. It’s the Bloom Booths that really add depth to the game’s simulation aspect. As the Oasis grows, you’ll be able to build Bloom Booths – basically market stalls – on empty plots. Although the Booths require you to grow produce and collect materials to sell, the Oasis needs them to attract new residents. While it had the potential to border on the monotonous, it’s incredibly satisfying to watch the population and your town grow.

However, the game is much more than your traditional town simulator. When you’re finally allowed to venture beyond the Oasis, the game quickly becomes your traditional action-adventure affair. Obviously influenced by The Legend of Zelda series, the majority of your time in the desert is spent exploring puzzle-filled dungeons and battling monstrous enemies. While it’s far from the only game aping this formula, Grezzo’s involvement with the Zelda franchise really shines through here. They even manage to improve on some shortcomings, Ever Oasis introducing combo attacks to spice up the simplistic sword slashing combat.

While these two disparate gameplay styles could have felt disconnected, Grezzo does an excellent job making both feel relevant. You can venture out alone, but it is best to recruit a team of explorers to help out. However, as you’re only able to recruit your citizens, it’s vital that you attract as many to people to the Oasis as possible. Even maintaining happiness of your residents is crucial, their satisfaction tied directly to your health bar. It seems impossible, but this strange hybrid of Animal Crossing and Zelda actually works. 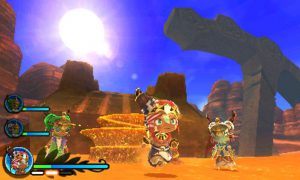 The game owes much of its charm to its endearing character design. While the simplistic art style often makes it difficult to tell each character apart at a glance, their expressive faces help each interaction remain incredibly memorable. The majority of the residents in the Oasis have minimal dialogue, but their facial expressions are enough to quickly establish their personality quirks. After getting to know each inhabitant, there is the difficult decision of deciding which to bring along on your adventures. While each have different abilities and weapons, it’s hard not to choose based solely on personality.

The various environments in Ever Oasis are just as stylised as the characters. While they are similarly simplistic, it’s this minimalism that allows the gorgeous game to push the limits of the 3DS. Just like with Ocarina of Time 3D, Grezzo has managed to squeeze some amazing looking graphics out of the aging handheld. With a similarly impressive soundtrack, Ever Oasis is an incredibly polished experience.

While this charming 3DS game might not be receiving the attention it deserves, Ever Oasis is an extraordinarily deep experience to sink your teeth into over the summer. Beautifully combining two disparate genres, it manages to provide an incredibly refreshing experience for fans of both Animal Crossing and The Legend of Zelda.

Ever Oasis is now available for Nintendo 3DS. There’s even a free demo to try on the eShop.