Over the course of six seasons, TV’s monolithic blockbuster Game of Thrones has gone from “that cool new show with Sean Bean” to “holy sh*t, how badass is Lyanna Mormont?!”. Indeed, such is the excitement and anticipation that the biggest show in the world riles up that it seems every side character has their own fandom, every plotline has its tin hat theories and every scene spawns at least a dozen reaction videos on YouTube the next morning. After what was considered by many to be perhaps the weakest season of the show in the form of season 5, Thrones hit back with a vengeance last year as season 6 proved to be arguably one of the show’s stronger string of episodes, with the closing pairing of ‘The Battle of the Bastards’ and ‘The Winds of Winter’ probably being the best one-two hit in the Thrones back catalogue. 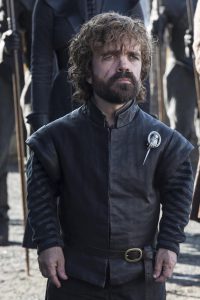 We’ve had to wait a little longer for a Game of Thrones season this year however. With the show entering its penultimate season, there will only be seven episodes which were filmed on a delayed schedule to accommodate the change in weather necessary for the story (Ned did always say that Winter was coming). This delay has only served to heighten excitement for July 16th and the return of Thrones, but what can we expect this time around? What do David Benioff and D.B. Weiss have in store for our favourite, and not so favourite, characters? How does the scale get any bigger? Let’s have a look…

The grand scheme of season six seemed to largely be one of payoff, much like the dizzying heights of season four, leaving fans with plenty to talk about and a lot of material to sink their teeth into. However, there are still a number of storylines which seem to be only just reaching their climax, meaning that season seven will likely see the storytelling become tighter and more urgent. Add in the seven episode factor and this may just be the most concise and filler-free iteration of the show to date. The biggest talking point coming out of season six was Cersei’s (Lena Headey) ascension, via somewhat nefarious means, to the Iron Throne. The new Queen of Westeros decided to no longer play by words and try for victory by removing one or two people from her path. In blowing up the Sept, Cersei not only killed several of the show’s key players (including the inadvertent death of her son King Tommen, or perhaps that was her cruel plan…) but she effectively tipped the chess board upside down and threw it away.

As Daenerys (Emilia Clarke), Tyrion (Peter Dinklage) and the Dornish sail to Westeros to reclaim the Targaryen throne, they are heading straight into Cersei Lannister’s game, and you can guarantee that the Mad Queen will not relinquish her throne without a fight. But herein lies the most intriguing subplot – Cersei’s prophecy. If you cast your mind back to the beginning of season five, you’ll remember a young Cersei receiving some harrowing words from a witch; she would have three children and her husband sixteen, she would be Queen until one younger and more beautiful would cast her down, and when all was said and done, the Valonqar (high Valerian for “younger brother”) will strangle her to death. So far, this prophecy has rung true for Cersei, despite the measures she’s taken to avoid it, but her fear of Queen Margaery seems to have been misplaced as the Mother of Dragons sails towards her, with the Valonqar at her side. How can we forget, however, the look that Jaime Lannister (Nikolaj Coster-Waldau) gave his sister as she took her place on the Iron Throne; the complex and disturbing relationship between the Lannisters could take an even darker turn this season, with the other Valonqar residing close to the Queen. 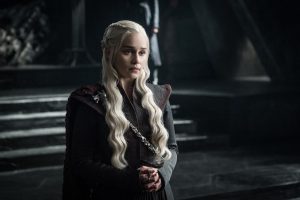 Will the Mother of Dragons, Daenarys Targaryen (Emilia Clarke) finally come sit atop the throne? (Photo by Helen Sloan/HBO).

Casting our eyes North, despite the arrival of Winter, things are heating up significantly. After the bloodbath at Winterfell in which Jon Snow (Kit Harington) took back the Stark stronghold, the North has united behind a new King of the North in the form of Ned Stark’s bastard. Jon Snow knows that there are two battles to be fought; one for the ultimate liberation of Westeros and end of this game, the other against the seemingly unstoppable forces of the Night King and the White Walkers who are moving further towards the Wall. The Wall is the only thing in their way, Benjen Stark told Bran (Isaac Hempstead Wright) as much, and we know that the final battle seems to be looming – does the Wall come down in season seven? But there is hope in the battle against the night as Samwell Tarly (John Bradley) has finally reached the Citadel in Oldtown, hoping to find something to aid them in the fight. As a show filled with Thespians, Jim Broadbent has been confirmed as the latest addition to the cast as Archmaester Marwyn, a likely ally to Samwell in his quest, their scenes should likely be vital to the show’s overarching story. Added on top of all of this is Bran’s knowledge that Jon is actually the son of Rhaegar Targaryen and Lyanna Stark, and thus has a legitimate claim to the Iron Throne and we have an intriguing boiling pot in the North. 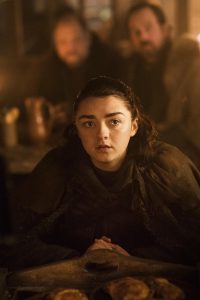 Elsewhere, Arya Stark (Maisie Williams) is back on the shores of Westeros and seems to be on a revenge quest to tick every name off of her list, her killing of Walder Frey at the end of season six could be the spark of a bloody path for the youngest Stark girl. Thus far, Arya has managed to cross quite a few names off of her list, so who is left to kill? The Hound, Ser Ilyn Payne, Cersei, The Mountain, Melisandre, Beric Dondarrion and Thoros of Myr. One can’t help but notice how startlingly close Arya is geographically to The Hound, Beric and Thoros after her appearance at The Twins, it would seem that season seven will see Arya reunited with her old friend Sandor (Rory McCann) and possibly manage to wave goodbye to Beric and Thoros. And with the reappearance of the Brotherhood without Banners, one noticeable book absentee could finally, finally make their debut… but I’ll leave that for the tin hat theorists.

Also divided and also on the march are the Greyjoy family. With the death of Balon finally coming, Yara (Gemma Whelan) and Theon (Alfie Allen) have allied with Daenerys, and Uncle Euron (Pilou Asbæk) looks set for his own attempted conquest, so chalk up yet another divided family and vengeful madman on the loose in Westeros. Then there’s Brienne (Gwendoline Christie) and Pod (Daniel Portman) who left season six in a rather open-ended manner, escaping Riverrun and likely looking to reunite with the Starks. And then there’s the elusive and still mysterious Melissandre (Carice Van Houten), who could be up to anything and siding up with whoever will take her.

Long story short, there are so many moving parts to this show now that speculating on Season 7 is a discussion that could last for days. For now, lets just sit back and let the anticipation grow, because it’s Game of Thrones – there’s nothing quite like it! Mark your calendars and start crossing off the days before the inevitable TV event of the year arrives.