In the first part of The Best Doctor Who Finales, Steven Moffat failed to impress as ‘The Wedding of River Song’ was crowned the worst finale to date. While there was some praise for the Series 5 and 8 finales, it wasn’t enough to save all but one of his efforts from the bottom half of the list. With ‘The Doctor Falls’ bringing Series 10 to a close tonight, it’s finally time to see which finale managed to take the top spot.

After the death of Clara (Jenna Coleman), the Twelfth Doctor (Peter Capaldi) finds himself trapped as an unknown foe tries to extract a confession from him. It’s a path that will lead him back to Gallifrey at last… 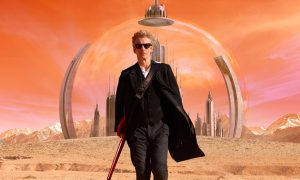 Oh, Steven. I’m sure we look little bias for putting all of Russell T Davies’ finales before yours, but we promise we’ve tried our best to be fair. The best of his finales is his most recent. Coming in immediately after a whopper of an episode with ‘Face the Raven’, ‘Heaven Sent’ is a sombre solo affair, with only Peter Capaldi speaking throughout. It’s an intense episode that despite its Shakespearian dialogue and spooky foe, lacks any sort of fun or lightness to it. Nonetheless, it’s an ambitious premise that’s executed well – and can we talk about the first half of ‘Hell Bent’? The Doctor’s spine tingling stand-off with Rassilon (Donald Sumpter) is now the stuff of Who legend. It’s just a shame the closing half of the episode resurrects Clara (the overused Jenna Coleman), rather than making it all about the Doctor’s return to Gallifrey. Their eventual separation is one goodbye too many – we’ve seen Clara leave at the end of Series 8, return a Christmas special later, and then die just two episodes earlier. Maisie Williams’ Ashildr is also an odd presence in the episode. A finale that starts strong, but suffers in its conclusion.

When the Daleks snatch the Earth from space, it’s up to the Doctor’s ex-companions to save the day, while the Tenth Doctor (David Tennant) and Donna (Catherine Tate) scour the universe for them. 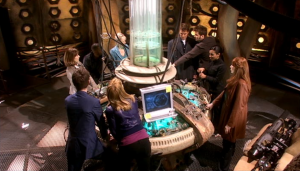 Russell T Davies’ first appearance on the list is his final finale, a swansong to the first four series of revived Who which saw a heap of favourites return to save Earth from the Daleks. ‘The Stolen Earth’ is an orgasmic outing for fans of the show, with both of its spin-offs The Sarah Jane Adventures and Torchwood piling in, and all three of revived Who’s companions – Catherine Tate, Freema Agyeman and Billie Piper – appearing. Julian Bleach puts an iconic spin on classic foe Davros. And the cliffhanger between the two parts is the stuff of legend. ‘Journey’s End’ faces the unenviable task of wrapping up the whole thing; it does so clunkily, with the Daleks defeatedly way too easily, and Rose Tyler’s ‘Doomsday’ departure rehashed (more on that later). In comparison though, Donna’s final goodbye is absolutely heartbreaking…

The Ninth Doctor, Rose (Billie Piper) and Captain Jack (John Barrowman) find themselves trapped in twisted versions of modern-day game shows, but it seems that dark forces are manipulating events. 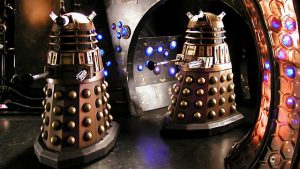 While it is the first finale of revived Doctor Who, the conclusion of Series 1 feels much more climatic and grandiose than anything we’ve seen since. With a deadly Dalek armada invading Earth, the Doctor is forced to consider sacrificing humanity to destroy his greatest foe. Still recovering from the events of the Time War, Christopher Eccelston masterfully portrays the character’s inner turmoil in a way that makes you wish he’d stayed around for another series. Justifying the Doctor’s desperation, the Daleks have never felt more threatening than they do here. While ‘Bad Wolf’ introduces a host of memorable secondary characters, the Daleks ruthlessly dispatch of every single one (*sob* Lynda with a Y). By taking time to establish the Daleks earlier in the series, RTD is able to rely on their incredibly menacing presence here. It’s true that some of references to the Weakest Link and Big Brother date the story, but it’s easy to look past these holdovers in the face of such an epic adventure. With Rose’s dramatic Bad Wolf speech and the Ninth Doctor’s emotional departure, the Series 1 finale is “absolutely fantastic”.

Ghosts are appearing across London. The Tenth Doctor and Rose (Billie Piper) soon identify the mysterious Torchwood Institute are to blame, but their adventure will have devastating consequences for both of them. 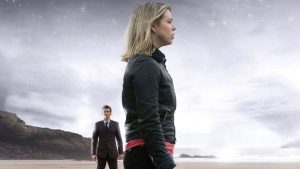 An iconic adventure, Series 2’s finale saw TV’s favourite couple separated seemingly forever. David Tennant and Billie Piper give stunning performances as the Doctor and Rose, torn apart at their prime, and the reason for their separation feels worthy of the high stakes at play. Daleks vs. Cybermen is equally enchanting to watch, with their spat in the corridors of Torchwood Tower amongst my favourite scenes in Doctor Who history (“You are superior in only one respect – you are better at dying!”). Jackie (Camille Coduri) provides further laughs, with her story getting closure thanks to parallel world Pete’s return, and Russell T Davies manages to balance comedy and darkness perfectly across both parts. Okay, it might be a bit cliché – especially the final scene in Bad Wolf Bay – but who doesn’t love a tragic ending to a love story?

As the last remnants of humanity struggle to reach Utopia, the Tenth Doctor and Martha (Freema Agyeman) unknowingly awaken a long forgotten evil. 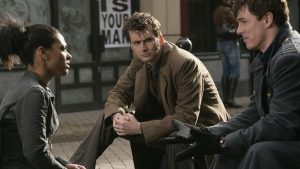 The best Doctor Who finale is the Series 3 trilogy that saw the return of the Master. Series 1 and 2 relied on the perennial Dalek threat, but it was inevitable that revived Doctor Who would eventually bring back the Doctor’s Moriarty. As the titular Time Lord’s equal, the Master is the ultimate Doctor Who villain in many ways. While Derek Jacobi briefly plays a more traditionally sinister version of the character, John Simm’s energetic Master is the perfect match for David Tennant’s fun-loving Doctor. Captain Jack (John Barrowman) also makes a welcome return, the immortal Time Agent finally reuniting with the Doctor after ‘The Parting of the Ways’. However, with ‘Utopia’ and ‘The Sound of Drums’ pushing the Doctor and the Earth to the brink of defeat, ‘The Last of Time Lords’ is really a celebration of Martha. Freema Agyeman didn’t stick around full-time after Series 3 , so it’s great that she plays such a central role here. With so many memorable moments, the Series 3 finale is the best Doctor Who has to offer.

These are our thoughts, but what do you think? Tell us below. Doctor Who Series 10 concludes tonight with ‘The Doctor Falls’. Catch it on BBC One at 6.30.