An absolute blast. Some of the most fun I've had at the theatre in a long time.

Grease is probably one of the most well-known musicals to date. Despite the inherently crude humour and sexual lyrics throughout, it is one of those musicals that we seem to know all the songs from by the age of 10. The story itself is one I’ve never particularly enjoyed – I find its moral lesson about changing yourself to get the boy extremely disturbing, and I never related to any of its characters. Yet, in spite of that, I could not help but smile from ear to ear throughout the entire show.

This is the third time I’ve seen a production of Grease, two of which have been at the Mayflower, but yet again, a new cast meant a new feel and a wonderfully fresh and vibrant telling of the story. Although initially apprehensive about the casting choices, by the end, they had all won me over.

The key to Grease is for nobody to take it too seriously, including the actors. Right from the opening eponymous number, this cast were all about having some fun – and that meant that they understood exactly how to pull of the show. The bright lights were up, and the cast were energetic and passionate, drawing in the audience with ease. I was beaming – as was everyone around me. 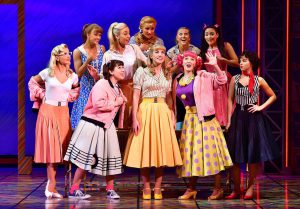 This energy and passion was upheld throughout the whole show: during dance numbers such as ‘Born to Hand Jive’, through the comic scenes, through cheerleading routines – nobody held back at all. This is what made the show memorable.

Tom Parker as Danny Zuko, despite my love of The Wanted, initially seemed like an odd choice. His voice was different to any of the Dannys I was used to. Yet, as the show went on, he convinced me more and more that he was the perfect choice for Danny. What Parker lacked in Musical Theatre style vocals, he made up for in his thorough understanding of the character. He was the perfect balance of endearingly awkward and arrogantly cool. He perfected the longing for Sandy, but also the longing to retain the image he had worked hard to create. He also perfected the awkward laugh, and his comic timing was generally brilliant.

As Sandy, Danielle Hope smashed it. Sandy is a rather annoying character, so to make her sweet enough to be likeable is a real feat. As well as this, her vocal performance was consistently strong. In particular, her rendition of ‘Hopelessly Devoted to You’ left me with uncontrollable goosebumps.

Eastenders alumni Louisa Lytton was a marvellous Rizzo, perfecting one of my favourite roles. The vulnerability of the character was subtle and nuanced to a fault. The rest of the T-Birds and Pink Ladies were also on point; each brought flair and individuality to their roles, whilst also flawlessly working together as a unit. The group chemistry was brilliant, making the whole performance seem more genuine.

Of course, when talking about performances, I cannot bypass Jimmy Osmond’s hilariously ostentatious turn as Teen Angel, making the most of his shining moment to be charming and larger than life.

The cast of course are not the only thing that make this show such a joy – they are working with such a brilliantly upbeat and fun score. The pit band playing the score were flawless all night, throwing themselves right into it. The set and staging also enhanced the overall fun of the show. Bright lights, shining cars with fireworks, and moving school bleachers all added to the larger than life atmosphere in the theatre.

The main feeling I had walking out the theatre was one of pure elation and joy. As I said, the key to Grease is fun, and as long as you’ve got that down, you’ve got a fab performance. These guys certainly put on a great show, and one that should be watched by as many people as possible.