It's difficult to fault 'World Enough and Time'. The Doctor's latest adventure is one of the best episodes in years.

Kicking off the Series 10 finale, ‘World Enough and Time’ is a brilliantly executed adventure for the Doctor, Bill and Nardole. It’s been years since I’ve regarded a Doctor Who episode as perfect, but I’m struggling to find any fault with this masterful work of storytelling. 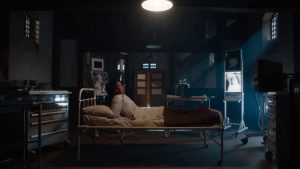 Steven Moffat loves a clever premise, but these often fall down in their overcomplicated nature, and the necessary exposition begins to intrude on actual storytelling. This certainly could have been the case with this episode, the Doctor (Peter Capaldi) and Bill (Pearl Mackie) trapped at opposite ends of a 400 mile spaceship trying to escape from a time bending black hole. However, the episode’s slower pace means this information can be doled out carefully. Supplementing the Doctor’s quick explanation, Bill is shown live footage of the cockpit to emphasise the time difference. Without the need to bombard the audience with timey-wimey exposition, Moffat is able to pen a brilliantly atmospheric story.

While the Doctor, Missy and Nardole (Matt Lucas) spend the majority of the episode on the ship’s futuristic flight deck, Bill is trapped in a hospital in dilapidated back portion of the ship. With a 1950s asylum vibe, the chilling atmosphere is certainly pushing the limits of BBC One primetime viewing. Combined with Murray Gold’s disturbing choir score, ‘World Enough and Time’ is undoubtedly one of the most atmospheric episodes of Doctor Who.

The threat of Cybermen hasn’t been the same since they were totally obliterated by the Daleks back in 2006. While Moffat brought in Neil Gaiman to restore the Cybermen in 2013, a sleek redesign wasn’t enough to breathe new life into this classic foe. However, in a stroke of genius, this episode sees a return to the original Cybermen design from 1966. These bandaged proto-Cybermen are far more terrifying than any of their metallic successors, their former humanity much more obvious. 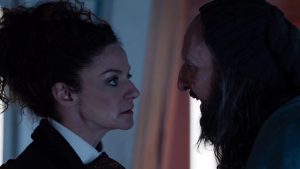 Despite Missy’s presence throughout all of Series 10, ‘World Enough and Time’ is the first episode to actually use the brilliant Michelle Gomez properly. While the self-referential “Doctor Who” jokes overstay their welcome, it’s great to see Missy actually interacting with those around her. She even manages to hold her own in the brief scene she shares with John Simm, Missy nonchalantly threatening to kill her disguised predecessor. Considering that this is Gomez’s penultimate episode in the role, it would be criminal if she didn’t play an even larger role in ‘The Doctor Falls’ next week.

However, it is John Simm’s role in the episode that really steals the show. Despite the BBC completely ruining the surprise months ago, the return of Simm’s Master is something to be heralded. He spends the majority of this episode disguised, but it’s a treat to see to Simm act alongside the fabulous Bill. While he only shares 30 seconds of screen time with Gomez and Capaldi, ‘The Doctor Falls’ should a satisfying amount of scenes with all three… hopefully.

While ‘The Pilot’ really impressed, it was based on what it meant for the rest of the series. However, ‘World Enough and Time’ is a masterpiece in its own right. ‘The Doctor Falls’ might still disappoint, but it won’t lessen the brilliant story that Moffat concocted here.

Doctor Who concludes with ‘The Doctor Falls’ next Saturday night. Check out a trailer below. You can look back at The Edge‘s reviews and features on Series 10 here.