Redwater suffers from classic soap problems, with constant twists that'll give you whiplash.

When Redwater‘s first episode aired, I praised it for a lack of “soapy tantrums and slaps”. Five episodes later, it’s about as soapy as a washing up bowl. Each soap bubble of a plot line simmers with its own knot of tension, glossy and shiny on the outside due to Irish aesthetics and decent acting; only to then pop before making any real bang. Overcomplicated, overfilled and frankly a little overdramatic, Redwater lacks the subtly of its apparent spiritual inspirations, Broadchurch and The Wicker Man.

I’m not sure why I’m surprised. True to its lead characters, Redwater is Irish EastEnders, complete with murderous priest, illicit affairs and frustrating misunderstandings at every turn. If it had set itself up as a soap opera from the start, I’m sure it would have worked far more successfully; each storyline we’re introduced to has the real potential to sizzle out over months, or even years. Redwater is constantly disadvantaged by its limited run, struggling within the confinement of six hour-long slots. Some storylines appearing out of the blue with very little set-up; others fail to reach any sort of climax by the end of Series 1.

Take Kat and Alfie. Though their inclusion in the BBC’s title may lead you to believe differently, Jessie Wallace and Shane Richie do very little from Episode 2 onwards, and at the very most should be considered part of a far larger ensemble. Though Kat was relatively compelling while she is searching for her son, very little happens when she succeeds in her mission, bar a few misunderstandings that would make little sense to a viewer unaware of her EastEnders history. Unsure of what to do with their titular characters, the writers of this drama play off constant secret keeping and misunderstanding between Kat and Dermott (Oisín Stack), and the prophetic visions caused by Alfie’s brain tumour. (Is this canon with EastEnders? I’d like to see Dot Cotton predict the latest Albert Square explosion before it happens.) The final twists of the episode, whilst admittedly shocking, feel all the more frustrating as a result – we feel cheated out of a fallout to the most thrilling ten minutes of the show so far. 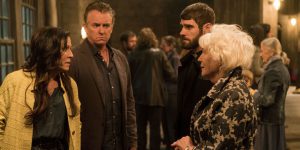 A far more successful area of the story is the suffocating drama between the sprawling Byrne clan. Fionnula Flanagan sparkles as the matriarch we wish EastEnders had right now. An old lady that would eat Peggy Mitchell for breakfast, Agnes Byrne is deliciously evil but still somehow endearing in her motives to protect her family. Her daughters Roisín (Maria Doyle Kennedy) and Eileen (Angeline Ball) are equally fascinating to watch, especially when pitched against each other. There’s something believable and entrancing about their sibling rivalry, with poor Peter Dolan (Stanley Townsend) caught between them. Again, there’s a big bomb yet to go off, with the final episode revealing that Roisín and Peter’s affair was directly consequential to the death of Eileen’s daughter many years before.

It’s a similar story with the affair between cousins Andrew (Peter Campion) and Kieron (Ian Toner). Given the magnitude of its eventual exposure, it should carry far more of the story than it’s awarded, with neither of their mothers or Andrew’s wife Bernie (Susan Ateh) even close to the truth come the end of the first series. Creator Dominic Treadwell-Collins and co take a large gamble in hoping a second outing for Redwater is commissioned, with more than five plot lines left hanging in the final moments of Episode 6.

Ultimately, Redwater is a promising soap story restrained as a drama miniseries, not even making time for its titular characters. Though it constantly glimmers with potential thanks to great acting, the crammed number of storylines come at each other’s compromise. I’d go as far to say that Redwater would be far better without Kat and Alfie. Is it worthy of a second series? I hope so, just to see how the multitude of cliffhangers pay off. But by the end of its first series, this soapy mess is looking a bit too like murky dishwater.

Kat and Alfie: Redwater aired on BBC One. Catch up on the series via the BBC iPlayer.