It’s difficult to think of a genre in gaming as oversaturated as the shooter. From Call of Duty: Infinite Warfare to Battlefield 1, the best-selling games list of 2016 is mired with monotonous gun simulators. The original Splatoon provided a much needed escape from this never-ending onslaught back in 2015, but the Wii U’s horrendous sales meant that this innovative shooter slipped under the radar for many gamers. This looks to change with the release of Splatoon 2 in July.

Breaking away from the traditional deathmatch gameplay of most shooters, the goal in Splatoon isn’t to simply kill all of your opponents. Instead, the game asks you to cover the environment with your team’s coloured ink. While you still have the ability to shoot the opposite team with your military grade paintball guns, it’s only to delay their attempts at painting over your handiwork. The team who covers the most ground with their colour wins. The ability to turn into a squid and stealthily swim through your team’s ink is the icing on the strategic cake. This innovative – and slightly ridiculous – take on the shooter genre is an example of Nintendo at its most Nintendo-y, the wacky Japanese company refusing to bow to trends and release something more traditional. 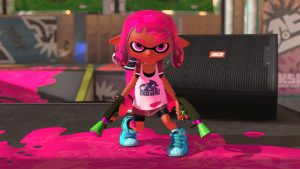 Yet, as I said before, the original Splatoon simply didn’t reach enough players to make a big impact. While it received rave reviews, the “ink-redible” shooter remained practically unheard of outside of Nintendo’s core fanbase. Splatoon 2 has the potential to change this. Releasing on the Nintendo Switch in July, the sequel has a much better chance of reaching the audience it deserves. While the Switch only released in March, it is already on track to outsell its disastrous predecessor.

Just like the original, Splatoon 2 promises to include robust online multiplayer and a lengthy single-player campaign. As well as introducing new maps and weapons, the sequel will supposedly fix many of the problems with the original game’s multiplayer. These are mainly logistical tweaks like reducing latency and increasing the number of maps that are playable each day, but with these kinks sorted, Splatoon 2‘s multiplayer should be able to rival that of a more mainstream shooter. Nintendo has yet to announce much about the game’s single-player mode, but we can assume it will play similarly to the original’s campaign. Unlike the majority of modern shooters, Splatoon’s single-player was lengthy and markedly different from what is offered in multiplayer, rarely reusing the same environments or scenarios. From the short glimpses we’ve seen in trailers, this seems to be a trend continuing in Splatoon 2. 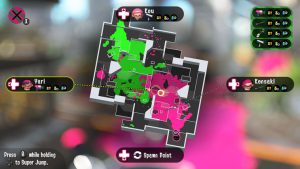 The only feature of the Wii U version that seems to have been lost in translation is the original game’s excellent map system. As Splatoon requires you to constantly monitor the environment, it is incredibly useful to have a bird’s eye perspective of the entire map throughout each match. While the original used the Wii U GamePad’s second-screen for this, the sequel has to clumsily integrate the map as part of the main UI. It’s certainly a shame, but this a problem that can’t be helped.

Summer is traditionally a very quiet period for games, so Splatoon 2 is a great choice for anyone looking for something to sink their teeth into. While each online match is short, the addictive battles will have you playing a dozen in a single sitting. Nintendo teased us with a short demo of the game earlier in the year, so I’ll be glad to finally get my hands on the full version. If you didn’t play the original then it should certainly be worth grabbing the sequel.

Splatoon 2 shoots onto the Nintendo Switch on July 21st. Check out the trailer below.