Channel 4's new drama shows promise, but it’s certainly not top of the class just yet.

Directed by Penny Woolcock, the first episode of Ackley Bridge premiered on Channel 4 last Wednesday night. It promised a drama built around the merging of two comprehensive schools in Yorkshire and the multicultural tensions that brings, but the show’s actual approach is not yet clear.

The first episode feels chaotic. What on earth is this drama trying to get at? It seems both disjointed and rushed. My expectations of a gritty drama were replaced with a series of half-humorous and half-serious plot lines. The opening scene of Missy (Poppy Lee Friar) and Naz (Amy-Leigh Hickman) perched on top of a skip made me think this was either a child-friendly version of Shameless or a some kind of Waterloo Road revival. It isn’t until you give the episode a second chance that it actually seems quite promising. 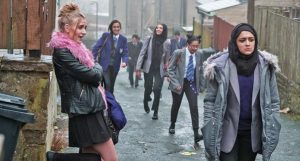 Like the thousands expressing their views on social media, I was expecting a typical school based drama to replace Waterloo Road, and immediately began to draw comparisons. Instead of an introduction to a handful of plot lines, we are greeted with a series of chaotic scenes trying to detail an entire school day within the first twenty minutes.

Miss Emma Keane (Liz White) – a scatty, disorganised free-spirit – is introduced shaving her legs in the back of a taxi and attempting to change out of her holiday clothes. While the school’s new headmistress (Jo Joyner) seems less than impressed when Emma arrives in fluorescent orange flip flops, her only punishment is only a quick dismissal. It feels like the writers quickly skim over the introduction and complexities of each character, something which is so important in a drama like this. How on earth would a teacher get away with missing an inset day, being late for work and turning up in such inappropriate footwear? It all seems quite absurd and far too fast paced for a gritty drama, forcing us to question what kind of show Ackley Bridge is trying to be.

The episode certainly delivers some witty one-liners though. Schoolboy Jordan Wilson (Sam Bottomley) – or rather the self-dubbed ‘Abdullah Bin Kevin’ – undeniably carries a fair share of the humour. While many of his jokes are a bit inappropriate, it draws attention to real issues of stereotypes and racial prejudice still alive in Britain today. When Jordan is punished for his inappropriateness, it seemed like we would begin to delve deep into the drama. Unfortunately, this only leads to the introduction of yet another storyline in an already crowded narrative. This opener is able to firmly establish itself as both comedy and drama, and by the end of the episode these loose ends begin to draw together with the introduction of some more serious undertones. 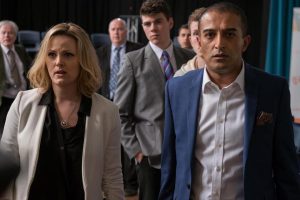 By the end of the hour, the episode introduces viewers to five individual storylines; racial tensions between the White and Asian students, Miss Keene’s troublesome daughter Chloe (Fern Deacon), the newly-strained relationship between Missy and Naz, Missy’s drink and drug addict mother, and a love triangle between Mrs Carter, Mr Bell (Paul Nicholls) and the new school sponsor (Adil Ray). It almost feels like the Ackley Bridge writers were aware of the large shoes that the Waterloo Road audience expected them to fill. As such, the first episode tries to cram too much content into an hour. While the more serious twist at the end of the episode suggests a promising future, the audience must realise that Ackley Bridge is not meant to be entirely serious or entirely humorous. It manages to create a new and refreshing hybrid somewhere down the middle.

It often feels that the characters are simply placed to deliver dialogue, rather than reveal and explore the possibilities of these characters as humans. For example, some Mandy Carter’s dialogue feels completely inappropriate for the setting. When Miss Keene accuses Mandy of letting the power go to her head, she replies by scolding Emma’s abilities as a teacher in front of everyone in the school canteen. This is completely unbelievable, especially since Mandy is desperately trying to make a good impression for the school sponsor. Similarly, an affectionate exchange between Mandy and her husband Steve takes place in front of everyone in the staff room. This is again beyond belief, Mandy portrayed as desperate to establish her status and sense of control in the new school. Surely she’d be cautious of her behaviour and conduct in these early days? However, while the dialogue and scenarios often feel disjointed, I am still beginning to enjoy the character dynamics that have been introduced.

The show definitely has a promising future, but it might take time for the drama to settle and establish itself. The first episode proves the strong acting ability of several lead characters, although there are a few examples of over-acting. I must give credit to the two aspects of Ackley Bridge that I feel really breathe a sense of fresh air into the programme. Not only does the show cast local individuals as extras to retain authenticity, the drama extends onto a Snapchat account run by some of the students. These are certainly exciting new ways to extend audience engagement with the show and the Snapchat feature is great at showing alternative sides to the characters. I am looking forward to what will be delivered next.