Read more
You are at:Home»Culture»Doctor Who: What’s in the Vault?!
By James Barker, Sam Law, Josh Nicholson, Sophie Jones and Damian Meaden on May 13, 2017 Culture, Television

Doctor Who has been going great guns since it returned five weeks ago. However, one question still remains in everyone’s minds – what’s in the Vault?!

For nearly half a century the Doctor (Peter Capaldi) has been ”trapped” on a university campus (a feeling we can all relate to) guarding something that can play the piano, share a takeaway, and gets excited at the thought of young people being eaten alive. Sounds positively charming. We all know our favourite Time Lord isn’t good at sitting still, so whatever lies in the mysterious underground Vault must be important. Much to the concern of Nardole (Matt Lucas), the Doctor’s got a bit distracted by new companion Bill (Pearl Mackie); could his lax behaviour lead to whatever is inside the Vault escaping?

Steven Moffat has promised the answer to the age-old ‘what’s behind the locked door’ question will come next week in Episode 6. In anticipation, The Edge‘s biggest Whovians have come together with their speculation of who – or what – lies within…

It seems the obvious choice, doesn’t it? Given we already know that Michelle Gomez’s incarnation of The Master is set to return during Series 10 (and in Episode 6, if the Radio Times is anything to go by), suddenly the identity of the powerful, dangerous or otherwise feared and undesirable individual imprisoned within the Vault seems a pretty simple leap.

The playing of a piano at the conclusion of last weekend’s episode, ‘Knock Knock’, further cemented the theory in my mind – a pretence of appearing cultured or otherwise fancy has befitted Missy in the past, especially when you consider the rather telling pause whilst the Doctor outlines his latest adventure, only to resume at the notion of death.

Some doubts remain – even by Moffat’s self-applauding attempt at genius, Missy being inside the Vault would be a disappointing plot twist to say the least. But it certainly seems the most likely, based on the early evidence.

Thanks to the BBC’s inability to keep spoiler-free these days (😒), we know that John Simm’s returning to Doctor Who this series as his immensely popular prior incarnation of the Master. But what evidence is there to suggest he could be in the Vault? 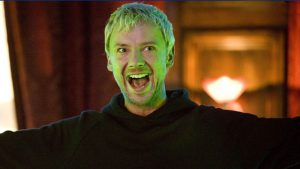 For starters, the door seems to be covered in Gallifreyan sigils, so it seems that some kind of Time Lord is locked within this box. Either that or the box is a gift from the Time Lords, who could have forced the Doctor into the ‘promise’ he keeps alluding to. In any case, it definitely has strong ties to Gallifrey, as does the Master.

While we’ve never heard the Master play the piano, the mischievous ‘Pop Goes the Weasel’ reply to the idea of hearing about little kiddies getting eaten is such a Master thing to do. And the Doctor’s friendly manner, inviting his prisoner to share a Mexican, is definitely suggestive of the close friendship he and the Master used to share as children.

Most convincingly, however, is the knocking. John Simm’s Master was best known for the sound of drums he used to hypnotise Britain, that had been driving him mad for the whole of his life. In ‘Thin Ice’, we heard whoever is in the vault knocking (albeit three times) on the doors that are keeping them inside. However, if you listen closely, the last bout of knocking seems to reach the iconic four just before the episode cuts to black. To add to this, the soundtrack seems to be playing the sound of drums, just a little slower. This could be pure coincidence, but this is Moffat. So either it’s going to be super obvious once we find out, or it’s going to make absolutely no sense. I’m hoping for somewhere in between. 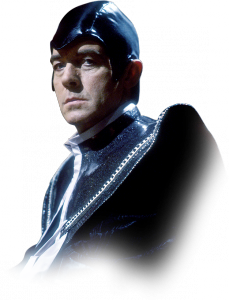 While it seems obvious that there is some form of the Master inside of the Vault, avid fans of Doctor Who should know by now that things are never that simple with Steven Moffat at the helm. Back in 1986, the writers of the flagging show introduced an evil future incarnation of the Doctor called the Valeyard. As he was supposedly somewhere in between the Time Lord’s 12th and 13th regeneration, reintroducing the character to battle against Peter Capaldi’s 12th Doctor would make perfect sense. Capaldi’s exit at Christmas means this is probably the show’s last opportunity to bring back the intriguing villain, so there’s a fair chance he’s what’s lurking in the Vault.

While some may argue that the Valeyard is too obscure of a villain to bring back, Moffat has revived equally forgotten baddies on multiple occasions. When the Great Intelligence reared its head in 2012’s ‘The Snowmen’, the mysterious entity hadn’t been seen on screen in over forty years. The only other problem is that some Timey Wimey shenanigans mean Peter Capaldi is actually the 13th or even 14th incarnation of the Time Lord, but mismatched continuity doesn’t seem to have bothered our notorious showrunner yet. 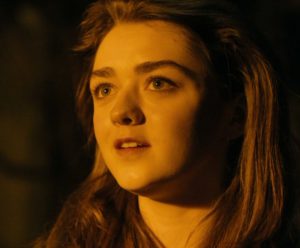 This could just turn out to be wild theory and speculation – but could the person inside the vault be Me? No, not literally “me”. I’m talking about the immortal, half-human, half-Mire companion/adversary played by Maisie Williams in Series 9, last seen exploring the universe in a 1950s diner-styled TARDIS.

Bear with me here: it may seem crazy that someone in possession of a TARDIS could get grounded on Earth, or – if we’re taking her timeline pre-“end of universe” – that she could get caught so soon after catching the Doctor himself on Trap Street, but stranger things have happened in the Doctor Who universe. It’d be pretty cool to meet up with Me again and see how she’s grown since the events of Series 9. Also: who else can play the piano? ‘The Woman Who Lived’ shows that Me would have had time to master all kinds of skills, including playing instruments, since becoming immortal in the 9th century. So really, as long as Moffat can convince us of how Me came to be stuck in the Doctor’s vault, I can imagine it would lead into a fantastic episode exploring why… 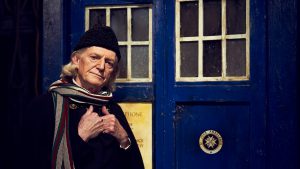 Rumours are rife that David Bradley is returning to Doctor Who this Christmas for Peter Capaldi’s final episode. Bradley is known for playing William Hartnell, the now deceased First Doctor actor, in An Adventure in Space and Time, and last month the actor refused to rule out that he was involved with future episodes. But could he have already filmed scenes, and be lurking behind the doors of the Vault?

With the First Doctor’s final antagonists Mondasian Cybermen due to make a return in the finale, it would make perfect sense for him to make an earlier return than expected to spice up Series 10. But why would the Doctor have a previous incarnation locked up? One fan theory speculates that Steven Moffat is working it in as an explanation to why the First Doctor is mostly unexplicably absent from his final episode (the out-of-universe reason being that Hartnell was too ill to film action scenes). Could the Twelfth Doctor be retconned into the events of 1966’s ‘The Tenth Planet’? 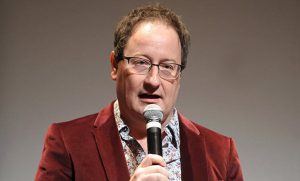 An Oncoming Storm approaches to usurp the egotistical Doctor Who showrunner Steven Moffat. I wouldn’t put it past the Moff to want his replacement locked up so he can remain the show’s very own God forever. Watch out, Steven – he’s coming for you.

Doctor Who continues next Saturday evening on BBC One. Check out our Series Guide to see what’s still to come!