While visually and musically spectacular, the main flaw came in the poor narrative which went nowhere and failed to do justice to Lewis Carroll's famous stories.

Lewis Carroll’s famous tales of Alice and the magical world of Wonderland are perhaps some of the most remarkable pieces of children’s literature from the nineteenth-century. Wonderland therefore takes on an ambitious task as it attempts to blend both Alice in Wonderland and its sequel Through the Looking Glass into one musical, combining the visual spectacle of the magical world, the quirkiness of its stories, its unique characters and its fun nature; all cornerstones of Carroll’s appeal. The result – sadly – is mixed. While the production, music and visuals all live up to expectations, the real narrative of Carroll’s story is lost in the chaos of the musical. By itself, Wonderland would be a success – but the expectations set up by the books it adapts, the production fails to really impress.

There were a whole range of positives. To begin with, the staging and setting were very cleverly created, with blended background and lighting to create the rabbit-hole effect. The set managed to adapt well to different scenes and created a sense of removal from the real world. The music, on the whole, was also well written. The costume design was very good, especially with the cat and caterpillar, and Grace Smart should be applauded for how the costumes embodied the wacky characters. The original score was creative and dynamic and managed to range from slower ballads, full encore numbers and moments that let out the sassy quirkiness and unique madness that embodies Wonderland. The musical highlights were Ella’s ‘Home’, the encore ‘Through the Looking Glass’, and The Mad Hatter’s ‘I Will Prevail’. 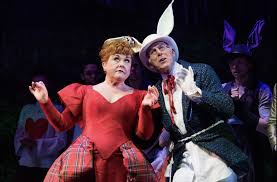 The cast, on the whole, should be applauded. The stand-out performances came from Wendi Peters (Queen of Hearts), Naomi Morris (Ella) and Natalie McQueen (The Mad Hatter). McQueen embodied the nonsense character perfectly as she provided a controlled quirkiness in a similar style to Johnny Depp’s filmiatic portrayal of the character. Morris also did extremely well, and is a bright star for the future. She bought a sense of comedy to the show and pitched the sarcastic teenager perfectly. Peters, even though sadly only in two scenes, stole the show with her over-the-top character, witty remarks and astonishing vocal performance. The disappointing factor was that Peters did not have a bigger place within the story and more vocal moments. Alice, played by 2016 Britain’s Got Talent finalist Rachael Wooding, was also vocally strong, though she lacked the ingenuity and intrigue that captures the original character. No performances were specifically disappointing and the cast merged well together – though the White Rabbit (Dave Willets) lacked the innocent wit of the original character and the encore’s dance routines were not always perfectly in-sync. Still, though, the performance quality overall was impressive.

As noted earlier, though, the main flaw was the lack of narrative within the story. For starters, there was no villan to be seen. The Queen of Hearts had one moment where she threatened to behead characters, though this was short-lived, and The Mad Hatter became somewhat evil for the duration of a whole scene. Apart from that, there was no-one for Alice to really ‘play-off’ unlike in the books: there were constant references to needing to “rescue Wonderland”, though it was not exactly clear what they needed to be rescued from. There were a few references to tyranny, though they were mere words and did not really integrate into the narrative. The Jabberwocky, as well as the real place of the Cheshire Cat, were both removed and they failed to  introduce anything to oppose them. The plot simply consisted of Alice arriving in Wonderland, some things happening and then Alice deciding to go home after the Queen didn’t remove anyones heads. It was, to put it simply, empty of any real plot. It was such a shame because the imaginative and logical nonsense plot of the original novels is so clever, while here they have sacrificed content for musical numbers that don’t sustain a story. You are entertained, but because of the musical and visual spectacle in front of your eyes, and not any story worth following.

In many ways, Wonderland achieved what it ought too – it removed you from reality for two-and-a-half hours as you entered into a different world that was visually impressive and employed catchy and diverse musical numbers. The biggest shame is that the lack of plot meant you were happy enough to leave Wonderland by the end of the show. So much was right, but this production failed to live up to the expectations set by its title.

Wonderland continues at the Mayflower Theatre until Saturday (22nd April).