In light of the BBC’s recent announcement of Casualty’s one take, one camera project, what does the 21st century hold for the future of television? How have our expectations of modern broadcasting moved from conventional recorded episodes to live and re-invented programming?

One thing is certain – we have entered a time where traditional television doesn’t impress demanding tech-savvy audiences anymore.

With the developments in modern technology, the broadcast industry was naturally destined for change. The opportunities for enhanced viewing, such as the possibilities of CGI technology, almost guaranteed a revolution for television. Productions such as BBC’s Doctor Who are clear examples of how such technologies have developed in time. The use of such technology results in more realistic portrayals, to the point in which we can’t see the fakery anymore.

Undoubtedly it’s exciting, but do we now now expect the inclusion of CGI as standard? It is considered a customary feature in a range of programming, and one we expect to see in film and television- in order to provide the extra help required to construct realistic storylines. With the potential of life-like GCI pretty much mastered, what could possibly be the next strategic move for the future of television? 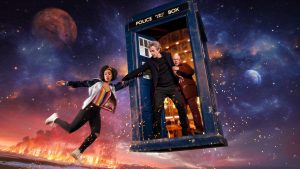 The popularity of live television drama seems to be an unexpected phenomenon. With the presence of live programming for years, such as reality TV contests and game shows, it is surprising that the transmission of live drama has only significantly began to take off as of late. The very first episodes of ITV’s Coronation Street were originally aired live, so the idea of live drama is by no means revolutionary, but its modern popularity and widespread adoption has skyrocketed.

To date, Coronation Street, EastEnders, The Bill and Two Pints of Lager and a Packet of Crisps among others have all waded into the territory of the risk and thrill that comes from live broadcast. Now, BBC’s Casualty has announced it is to follow suit – but with a twist.

So what is the appeal of watching a television favourite divulge into the depths of live broadcast?

Phil Collinson, the producer of Coronation Street at the time of its live 40th anniversary broadcast, quoted: ‘Anyone who said that they enjoyed the live episode are either not telling the truth or they’re masochists.’ Undoubtedly, many may agree that audiences are attracted to the thrill of the broadcast falling apart on live television.

EastEnders Live is a prime example of such an event. After a few fluffed lines, incorrectly positioned cameras and ruffling of microphones, it became the unfortunate prey of thousands of Internet vultures. It was widely-mocked for its blunders, but are people unappreciative of the technical logistics of such a production? More likely, audiences thrive off the thrill of risk and the potential of mistakes being made.

So what is the benefit of live TV? EastEnders Live was packed full of gaffes, unquestionably damaging the

‘truthfulness’ of the characters and story. On the other hand, the risk of such a production can be viewed as a deliberately orchestrated, viral PR stunt. EastEnders pre-established their presence on Twitter ahead of the live broadcast through #WhoKilledLucy and #EELive. It was expected that the programme would be talked about, but for what reason? Was it the excellence of the drama and its story, or the faux-pas that emerged as a result of the live transmission?

Either way, the show’s online presence arguably maximised the potential of widespread publicity that was generated by the broadcast. Therefore in the case of EastEnders, live television arguably generates new possibilities for online and media coverage in ways that conventional pre-recorded drama cannot.

But does live television compromise the quality of content? Surely its real-time nature cannot compare with the ever-detailed and refined nature of TV drama that has gone through extensive post-production.

Casualty is soon to be taking an even bigger step forward for modern television, but it is undoubtedly wading even further into the possibility of public ridicule and challenge.The BBC staple has announced plans to broadcast an episode in one take, using only a single camera. It has taken the next step in pushing the boundaries of conventional programming, trying to push itself to the forefront of television once more.  Such technical challenges, including forty microphones being hidden around the set and crew hidden in hospital rooms on set, increase the risk of something going wrong.

Which begs the question: is Casualty’s challenging project being created to simply push the boundaries of what can be created on television for the sake of it? Or is it an attempt to reach new levels of audience thrill and engagement? Either way, the broadcast this summer is one not to be overlooked.

Check out the trailer for the 2015 EastEnders Live week below: