Read more
You are at:Home»Culture»Author in Focus: John Green
By David Mitchell-Baker on February 21, 2017 Culture, Literature

With six novels and nearly three million YouTube subscribers to his name, acclaimed author John Green has become one of the most famous and significant voices in entertainment over the past decade. As his career hits its twelfth year, we take a look back at one of the world’s most popular and prolific authors as our latest author in focus.

Green first came into the public’s attention with his critically acclaimed smash hit debut novel Looking for Alaska in 2005. The book received glowing reviews, won the 2006 Michael L. Printz Award presented by the American Library Association, and started off Green’s trend of writing teen coming of age novels. The next year, Green’s sophomore novel An Abundance of Katherines championed the 2007 Michael L. Printz Award Honour Book. In 2008, Green teamed up with Maureen Johnson and Lauren Myracle to release Let It Snow, a compilation of three short stories written by each of the three authors, all intertwining with each other. Green wrote the second of the three stories, charmingly titled ‘A Cheertastic Christmas Miracle’.

In the same year, Green’s next significant mainstream book Paper Towns was released. The book debuted at number five on the New York Times bestseller list under the children’s category, and the next year won the Edgar Award for best young adult novel. More recently, it was adapted for the screen in a 2015 film, directed by Jake Schreier and starring Nat Wolff and Cara Delevingne. The film grossed $85 million worldwide from a $12 million budget.

In 2010, Green again released a split project as he teamed up with David Levithan for Will Grayson, Will Grayson. This inventive novel saw Green and Levithan writing alternating chapters for two separate characters of the same name in a connected story. It became the first ever LGBT-themed young adult novel to appear on the New York Times children’s bestseller list upon its release, where it remained for three weeks. But it was in 2012 that John Green found his biggest success to date, with the release of his sixth and most recent novel The Fault In Our Stars. The book became a phenomenal critical and commercial success, being named as the best fiction book of 2012 by Time and placing in USA Today‘s top ten books of the year. The Fault in Our Stars has sold in excess of approximately 18 million copies worldwide since its publication. Its film adaptation, released in 2014 starring Shailene Woodley and Ansel Elgort, became one of the financial success stories of the year, earning $307 million worldwide against a $14 million budget. 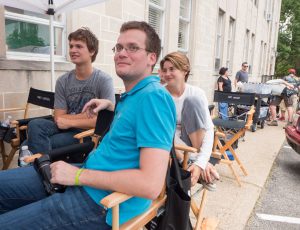 Ansel Elgort, Shailene Woodley and John Green on the set of The Fault in Our Stars (credit: James Bridges).

Details on Green’s next novel have been rather all over the place; he started working on a book titled The Racket but shelved the project, and in 2015 he announced a break from social media to focus on his next book. In August 2016 he confirmed a limited schedule of public appearances to finish off his first draft, but released a YouTube video in September saying that he may never release another book due to the weight of expectations in following on from The Fault in Our Stars.

But whether John Green does or does not release another book, one thing that is clear is that his existing work has gained him a deservedly loyal and dedicated fan base, and the critical and commercial success to go with it. With just six novels to his name, Green has become of the defining authors of the 21st century.

Book you should read: Paper Towns