Fun fact: Judd Apatow’s new sitcom venture, Crashing, was originally rejected by the acclaimed producer. Its star and creator, Pete Holmes, approached him with a pilot that was “too sad” to watch. Sounds like a barrel of laughs… 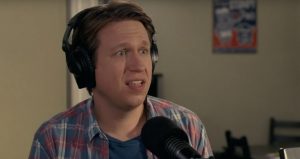 Alas, Apatow eventually climbed on board, and will have surely sprinkled his magic on the project – which hits UK screens this week. You may know Apatow from legendary comedies Anchorman, The 40-Year-Old Virgin, and Bridesmaids; or from TV’s equally stunning Girls and Love; so feel free to have high hopes for this sitcom. Pete Holmes, previously of an eponymous late night sketch show, plays a semi-biographical version of himself, after finding himself homeless when his wife leaves him. The perpetually unlucky comedian crashes the couches of some of New York’s top comics, creating Holmes and Apatow’s trademark styles of chaotic comedy. Pete is the only regular character, with Jurassic World‘s Lauren Lapkus on board recurrently as Pete’s (ex) wife Jess, and Artie Lange guest starring as himself in the first episode. Catch Crashing on Tuesday 21st February, 10:10pm on Sky Atlantic.

BBC One, Sunday nights, 9pm, seems to be a pretty formidable spot in scheduling. Following this year’s big successes in Sherlock and Apple Tree Yard, the BBC bring their adaptation of Len Deighton’s SS-GB to the screen this week. In an alternate version of 1941 Nazi Germany, the Axis’ victory at the Battle of Britain has swung World War 2 in their favour, and they become a harsh, occupying force of Britain. It may all sound a bit Man in the High Castle (Amazon Prime’s acclaimed Nazi-occupied America series), but this BBC series focuses more on the intricacies of Britain under German rule, most notably the power struggle between the two police forces after a mysterious murder. Maleficent‘s Sam Riley leads the cast, which includes Game of Thrones‘ James Cosmo and Primeval‘s Jason Flemyng. The series kicks off on Sunday 19th February. 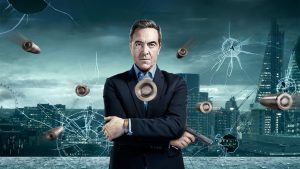 Lucky Man returns for its second series this week. The cop drama is co-executive produced by Marvel legend Stan Lee, and its first outing last year was the most-watched Sky Original Series in its (rather lacklustre) history. James Nesbitt stars as D.I. Harry Clayton, a homicide detective whose gambling habit cost him his life. The gift of a mysterious bracelet turns his luck upside down, but he soon learns each lucky action comes at a cost. Series 2 sees Clayton determined not to use the bracelet, fearful of its power; as James Nesbitt ominously prophecies in the trailer, “Nobody can be lucky forever…” Lucky Man returns to Sky Atlantic on Friday 24th February at 9pm; bonus points if you can spot Stan Lee’s cameo…

Here’s a throwback for many of you; who remembers Room On The Broom? “How the cat purred and how the witch grinned / As they sat on their broomstick and flew through the wind…” The children’s classic arrives at Nuffield Theatre in musical form this week. Tall Stories have adapted the book for the stage, a “quintessential family treat for everyone to enjoy”. Iggety, Ziggety, Zaggety, Zoom – the magic of Room On The Broom will sweep you away…. The musical flies into Nuffield from Monday 20th to Saturday 25th, with multiple performances on each day. Tickets are available via their website, but there’s limited availability, so hurry! 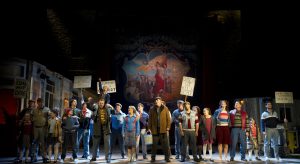 At Southampton’s other premium theatre, the Mayflower, their acclaimed run of Billy Elliot continues. The legendary musical is touring from London, here until March 4th. Our reviewer hailed the show as “an absolute delight; if you get the chance, this current UK tour is definitely worth seeing!”. Tickets are still available via Mayflower’s website – not one to miss! See the original review here.

In the world of books, British author and TV personality Giovanna Fletcher releases her new book this week. The vlogger, who is married to McFly’s Tom Fletcher, has recently welcomed two sons, Buzz and Buddy, with her husband, and her new book is about her ‘adventures into motherhood’. Happy Mum, Happy Baby hits bookstores on Thursday 23rd January.