Although structurally confusing at points, the show powerfully communicates its themes of hope, love and redemption.

Set up at the front of Highfield Church, the stage for this play is simple. A wooden set, with two sets of bunk beds, a water fountain, and a mining lift in the middle – and that’s it. However, where the play tells a narrative that may seem rather simple, it’s one that is aimed to be life-changing. The play is Darkness Falls, presented by Saltmine Theatre Company, and though I didn’t know what to expect, I enjoyed what I saw.

The play opens with a single spotlight on John, as a voiceover declares his prisoner number and the fact that he has been imprisoned for sedition. Immediately he is thrown into prison with 3 other prisoners: Titus, a rough aggressive figure; Timon, an intellectual Greek; Lavinia, a woman who has somehow been transferred to a men’s mining prison; and Lucius, a somewhat simple and quieter prisoner. Timon lays out the rules from the beginning; you don’t say what you’re in for, and you get on with the work. However, as the prisoners learn about John’s crime and wish to know the story that he was supposedly spreading, he begins to tell them: “In the beginning was the Word, and Word was with God and the Word was God. He was with God in the beginning. Through him all things were made; without him nothing was made that has been made. In him was life, and that life was the light of all mankind. The light shines in the darkness, and the darkness has not overcome it.” Thus begins John’s Gospel as it is in the Bible, and thus begins the story told by our protagonist. 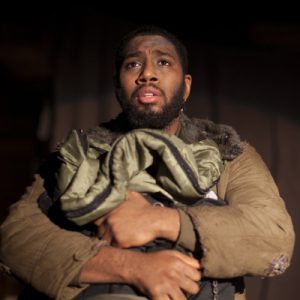 The rest of the narrative features the prisoners each taking the roles of characters in the gospel, and acting out John’s eyewitness account, intercut with the tale of the prisoners themselves and the ways in which this story is affecting them. The cuts themselves can sometimes be a bit messy, with it not always being clear which narrative we are currently in, and whether the prisoner is acting as themselves or in role as someone else. However, the acting itself, both as the prisoners and as multiple roles when re-enacting John’s story, is brilliant. Particularly beautiful is the way in which Lucius feels he is given value and worth by being given the chance to play Jesus in his story. He is the most distinctive between the scenes, physically and vocally changing his entire demeanour between the two characters with ease. As well as this, there’s a great chemistry between all 5 of the company; they are a natural fit together, all playing off each other in a way that is compelling and connects you with their stories.

Although I was not expecting there to be music, the few songs that there are, which are all sung a cappella, are a beautiful addition. Again, the company demonstrate their unity, and the melody that is created by their layering vocals is pretty wonderful to behold, whilst also creating a haunting quality of sorts. As said before, the staging itself is relatively simple, but in stripping back these other elements, it encourages the audience to focus on what the important thing is here – the story.

For those who’ve heard Bible stories a million times as a kid, this is a vivid and fresh telling of them, bringing them to life in a way that is different from most. For those who’ve never heard them, they are simply and clearly shown, and though some bits may be confusing, the point is made that Jesus was an incredible man, but also more than that. Whether you believe the claims they make or not, the thing that really comes across is the power of hope. Each of the characters goes on a journey because of the hope that this story gives them, and the change in each of them is evident. It’s this universal idea that hope is bigger than pretty much any other ideal, and has the power to keep you holding on, even when you’re in the worst of times, such as being in prison and at the end of the road.

The show wasn’t perfect; at times it was needlessly intense and there seemed to be a lot of shouting. However, it achieved its main aim, and that was to make the audience question whether they have hope, and in fact, whether this story that they are being told is going to be their hope. Although it didn’t feel like their was a clear resolution to the prisoner’s tale, the age old ending to the gospel, which is already known, is emphasised. It’s given centre stage, and it’s done in a way that does make you leave thinking about the big claims that the show makes. It asks questions, but does not leave the audience felling uncomfortable by asking those questions, always underlined with that theme of hope.

At the end of the day, it was a fresh retelling of a story that’s been told a million times, and to bring these words that are thousands of years old to life in colour; well that’s an achievement.

Darkness Falls, by Saltmine Theatre Company, played at Highfield Church on Friday 3rd February 2017. It featured as the first event of Southampton University Christian Union’s (SUCU) Events Week. You can find out more about their upcoming events here.