Biohazard is an ode to the very essence of Resident Evil, and proves that the series has much more to show us.

Resident Evil 7: Biohazard is an elegant resurrection of the series’ original intentions, returning to its survival horror roots, whilst maintaining beloved aspects which have arisen from the many iterations of the series. Capcom’s desire to return to their unique brand of horror is made clear with its subtitle, Biohazard, the series’ original name in Japan; whilst also filling the game with nods to its predecessors in both gameplay mechanics and aesthetic features.

Much to the anticipation of both fans and new players Biohazard strikes a balance between fast-paced action and tense psychological horror with an abundance of gore. The scenario of the Baker farm is far more scaled-down when compared to other games, as it focuses on Ethan’s attempt to rescue his wife, missing for the last three years, and the horrific events he uncovers. This change of pace works to the game’s advantage and narrative features link it to the overarching Resident Evil story without feeling forced or gratuitous.

From the get-go the game affirms its position as a true survival horror as Ethan is entrapped within the Baker property alone with limited weapons to defend himself against the horrors which lurk in the darkness of the property’s winding corridors and tunnels. A huge challenge of the game is the control of resources alone, as giving into panic can very quickly render the player completely useless. This gives the combat a refreshingly slow and measured pace which is an exciting change for fans of the series but may prove a test of patience for some players. Contrastingly the encounters between Ethan and the family members are nail-bitingly fast paced and challenging, requiring the quick thinking and intuition of the player. 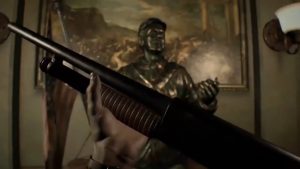 In some circumstances the player is required to interact with the environment, and whilst this is an interesting aspect of some fights the lack of indication of this can result in fruitless efforts and wasted time, and precious ammo, and ultimately only causes frustration. When encountering the ‘normal’ enemies there is an additional uncertainty of fight or flight, as the game teaches the player to value resources, but lacks any suggestion as to which option is more viable beyond the sometimes cluttered environment suggestion potential hidden enemies. This works to both the game’s advantage and disadvantage, dependent on the player, as it poses a true challenge to some but may otherwise discourage others. Gamers of either persuasion, however, will surely be satisfied with the dynamics of combat when they manage to reduce a terrifying enemy to a pile of mush and ooze with a couple shots to the head.

The introduction of the Baker family, the main antagonists of the game, suggests inspiration taken from various horror giants such as The Texas Chainsaw Massacre and Saw. But this has been mutated by Resident Evil’s unique brand of body horror into an entirely new, and terrifying, experience. In the seemingly immortal Bakers, Biohazard presents the challenge not to overcome with gunfire and gumption but to hide and traverse an enemy environment with their presence constantly hanging over the player.

Unlike the series’ previous iterations which have featured fantastically strange creations this game is far more human-centric which lends itself to a particularly unsettling atmosphere. For many gamers it’s easy to fight monstrous figures in the name of the greater good, but the introduction of family elements, particularly your estranged wife, and the people beyond the monsters makes the bullets a little harder to fire and the fights a little more heart-wrenching. This shift in focus is paralleled by the environmental change to the isolated Baker farm in the heart of the Louisiana swamplands, furthering the player’s feelings of isolation and fear.

Whilst not particularly challenging the puzzles, an integral element of survival horror, become much more of a hazard when combined with the presence of the Bakers, creating a new experience in which the hardship is not the puzzle itself but the completion of it whilst staying alive. This is no more pronounced in the game than in the video tapes, a smile-inducing optional experience which serve the player well if they decide to take the time to do them, resulting in a few less ‘you are dead’ screens and welcome narrative structure.

The shift from third to first person perspective lends itself to the more horror-centric theme of the overall game, creating a much more personal feel during action and interaction with the Bakers. This change also attributes to the games VR functionality; whilst the game is perfectly enjoyable without it, the optional incorporation of VR is a testament to how VR can be employed to a game’s immense benefit without becoming a gimmick, and sets an example for how VR can be incorporated in the future.

Not unlike many AAA games there is a slight difference in graphics quality when playing on a PC compared to the PS4 and Xbox One, but this a step up from the already impressive console graphics. The intricacies and detail of the environment, made possible with the RE Engine specifically created for Biohazard, are a standout element of the game and prove their importance in creating a horror atmosphere. In an effort to add to the realism created by the first-person perspective, the camera wobble feature enhances immersion, attributing visually to bouts of running in fear. Helpfully this is an optional feature, which can at times can be more of a nausea-inducing inconvenience than an addition.

Resident Evil 7: Biohazard is an ode to the essence of what Resident Evil is, and proves that the series has much more to show us. It is filled to bursting with expected yet still foul gore and violence and unexpected emotional implications. Its success is underpinned by the dedication to scaring the player and making them uncomfortable, resulting in a tremendous return for Resident Evil, sure to please both fans and newcomers. The Baker Farm is no Raccoon City, but it’s starting to feel like home.