You might have not heard of the game I am reviewing today. Or maybe you do know about it – and about the (possibly) whole new genre of games it has inspired.

The name is Yume Nikki (ゆめにっき), which means “Dream Diary” in Japanese. It is a surreal exploration game made by Kikiyama, first released in 2004. Made in RPG Maker 2003, this freeware game sports pixel graphics in the tiny resolution of 320×240, a simplistic gameplay, and a captivating depth to it. This game deeply impressed me when I first played it and continues to influence my thinking and art to this day. 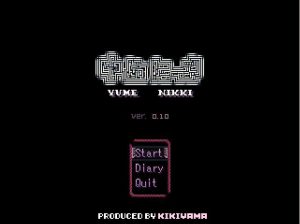 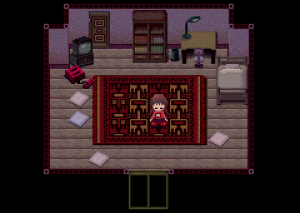 You play as Madotsuki, a girl (?) of unidentified age who never leaves her room. You can watch TV (that doesn’t pick up any channels), play your console (with one game), or go out to the balcony to look at some fog. Or you can go to sleep.

Once Madotsuki is asleep, she finds herself in her room again, but some things are different. And when you try to leave, you actually can. Into a room with 12 more doors. Each of those doors leads to a little “world”, which branch into more worlds, many connected by gates, doors, teleports or mazes; some leading to dead ends; all filled with surreal imagery and haunting drone loops.

The goal of the game is to acquire 24 “effects” scattered throughout the dream world, which unlocks the ending. Some you pick off the ground, some are given to you by NPCs. Effects can be equipped to change Madotsuki’s appearance and sometimes give her new abilities, which can on occasion be used to reach new areas or trigger certain events.

Otherwise… There is not much to do. Yume Nikki has been called an “anti-game” due to the lack of typical “game” elements. There is no dialogue. There is no monologue aside from Madotsuki occasionally saying “No/Impossible” when you try to leave her room or do forbidden actions. There is no explanation. You just walk around, look around, dream.

Colours flash. People ignore you. Eyes watch you. Mazes cause you to get lost. Giant monsters swallow you. A spaceship with a piano-playing alien takes you to Mars.

The main feelings Yume Nikki evokes are a strange sense of dread and horrible, overarching loneliness. Despite the game having hundreds of NPCs, only a few interact with you in any way. The ones that give you the most attention are terrifying-looking chasers called “Toriningen” (“bird-people”) who force you to wake yourself up if they catch you. Many maps are huge and looping, which adds to the sense of confusion (one of the main gameplay annoyances). Even some of the effects seem to hint at Madotsuki’s social and mental isolation. 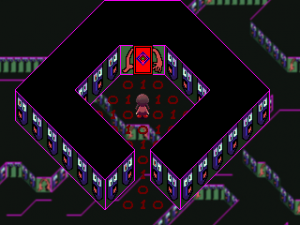 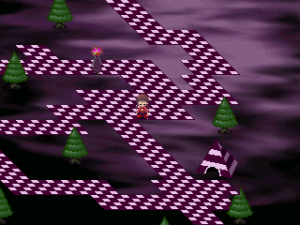 As there is no explanation from the author, the entire game is up for the player’s interpretation. Creating theories is part of the fun, and you can find long threads of them on anonymous *chan imageboards.

There are many sexual themes, for example, seeing how the game is full of imagery resembling fetuses, phalluses, uteruses or pregnant women with their heads cut off, as well as hands and eyes. Some theorise that Madotsuki was sexually abused, pregnant and/or had a miscarriage. Some think she might be transgender.

Another one is Madotsuki having homicidal tendencies – thanks to the fan-favourite effect “Knife”, which you can use to kill NPCs, causing them to utter a blood-chilling scream from the default RPG Maker sounds.

Madotsuki is commonly believed to be a hikikomori, or shut-in, but some people suggest that she was locked in her room against her will, or even that the monsters in her dreams are actually roaming outside, and the room is the only safe place for her. 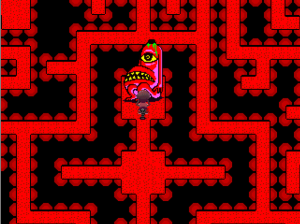 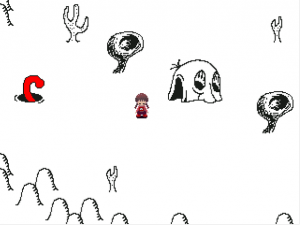 It doesn’t help that the creator, Kikiyama, is an extremely enigmatic person. They haven’t been visible on the Internet since 2008 (the last game update being in 2007), haven’t interacted with fans or commented on the game. “Official” merchandise, a manga and a light novel were released a few years ago, but still no updates on the game’s official website.

Not knowing for sure is probably the point. Madotsuki isn’t even an actual name, and means something like “window”, or “windower” (a daydreamer). The design on her shirt also resembles a window. Perhaps her role is to be “a window into the dream world” for the player, to encourage introspection. I certainly think this is achieved. And regardless of what Kikiyama might have been thinking creating the dream worlds, one thing that is clear is the amazing effort and love they put into their work.

The unique atmosphere of Yume Nikki appealed to many surrealism fans, but some of them wanted more. The fact that the game was made by one person with RPG Maker – a simple piece of software even a child can use – perhaps accounts for the massive following it received, complete with hundreds of fangames to date, most starring original characters with a similar mechanic. Many popular indie games were also inspired by or reference Yume Nikki – Undertale, for example, or RPG Maker classics such as Ib. It also inspired me, and as of now I am working on a surreal game of my own. All thanks to the nightmarish, mysterious, interactive piece of art that is Yume Nikki.

***
Yume Nikki is available for free from Kikiyama’s website (Japanese) or from Yume Nikki Wiki (English).

All images in the article belong to Kikiyama. The below image is a fanart by Magnus Gorny. 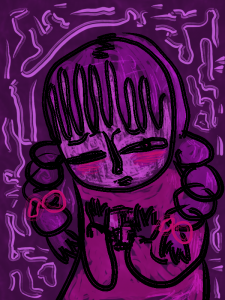