Read more
You are at:Home»Culture»Review: Doctor Who – ‘The Return of Doctor Mysterio’
By Damian Meaden on December 26, 2016 Culture, Television
40%
40
Troubled

Though supporting characters are a saving grace, this year's Who festive is tonally troubled; and don't even mention Nardole.

Doctor Who has undergone a sad transformation in recent years, with new episodes now more of an obligation than a pleasure for an audience of dedicated fans worldwide. This year’s festive edition, ‘The Return of Doctor Mysterio’, is the first offering of time and space to hit our screens in a calendar year.

The special pitches the Doctor against an unnamed species referred to only as ‘the brains’; aliens targeting the minds – quite literally – of world leaders, before integrating their own into a human host with the intention of conditioning the planet for a global invasion of their race. Factor in the mysterious ‘Ghost’, a superhero accidentally created by the Doctor’s chance encounter with eight year old Grant at the start of the episode, and another one of the series’ tired unrequited love scenarios, and all the ingredients are in place for another average hour of the world’s longest-running sci-fi show. 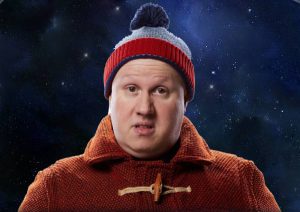 Showrunner Steven Moffat continues to contrast the fantastic with the meagre in his stand-alone specials, with episodes that give Love & Monsters a run for their money in its low fan opinion. All the ingredients of ‘The Return of Doctor Mysterio’ are mixed with his usual tiresome and haphazard time-jumping form, and it’s impossible to escape the notion that Peter Capaldi, one of the show’s only saving graces, might be better served by a different showrunner. As with last year’s offering, ‘The Husbands of River Song’, Moffat’s credible humour comes through with a large degree of success; though viewers who liked Matt Lucas as Nardole the first time round are unlikely to be appeased by his second outing as a semi-companion/space butler.

The rest of the supporting cast of the episode – among them Justin Chatwin (Shameless), Charity Wakefield (The Player) and Adetomiwa Edun (Merlin, FIFA) – manage to salvage a sense of realism from another of Steven Moffat’s outlandish, inconsistent and poorly explored plot lines. Despite the somewhat silly addition of a superhero with a ‘girl next door’ crush, Chatwin is able to generate enough empathy for the ‘Ghost’ to keep the subplot alive; though the attempt at a deeper, Batman-esque tone is a little grating past the halfway stage of the episode.

The episode has a pace that prevents it from stagnating in the more unnecessary scenes, though that in itself presents a problem. The cinematography of Doctor Who has always been among the best the BBC produce, but the cutting between sequences is abrupt and has a rushed feel to it. Forget digesting the profound moments amongst quieter conversation, or a segment that allows for the characters to take stock – if you nip out for another cup of tea during this episode, the plot will quite possibly already have progressed into the middle of next series. A plot which, for all it’s potential, is never fully realised.

The premise is actually quite good, but never does the Doctor, or indeed the villains themselves, stop to explain just why there is a need to colonise Earth. Are the brains under attack? Is something with their own planet amiss, if indeed it exists? Where do they come from? Are they simply another power-hungry race, keen to invade Earth for the sheer sake of it? This hour-long special fails to deliver a real threat to its protagonists until fifteen minutes before the closing credits, and leaves a sense of unfulfillment, a taste of what it could have been. Christmas television is, for all it’s faults, intended to be light-hearted, but this one is instead a little light on storyline.

Since its revival over a decade ago, Who has become one of the most iconic shows on British television, but in the most recent years, it has fallen from grace with its fans. Audiences are frustrated, stories are poorly executed, and the entire creative team seem oblivious to its consistent flaws. ‘The Return of Doctor Mysterio’ once again showcases this, and if anything is a backward step after a more promising Series 9. The standard episode length (here to stay in Series 10, by all accounts) falls short of reaching any sort of achievement. It’s nothing to write home about, but the trailer for the upcoming tenth series at the special’s conclusion does provide some hope that, whether it be in the dying embers of Moffat’s tenure as showrunner, Doctor Who could have enough about it to pull itself from its self-made slump.

‘The Return of Doctor Mysterio’ is available to watch via the BBC iPlayer. Doctor Who returns with Series 10 in April. Take a read of The Edge‘s ranking of the previous Who Christmas specials here.