In Part 1 of the Best Who Christmas Specials, we saw the appalling ‘The Doctor, the Widow and the Wardrobe’ confined to last place; the Twelfth Doctor (Peter Capaldi) fail to make it into the second half; and David Tennant’s swansong, ‘The End of Time’, just miss out on the top five. But who will clinch the top spot? Read on, dear Whovians…

The Tenth Doctor (David Tennant) finds himself aboard an intergalactic replica of the Titanic. What could possibly go wrong? 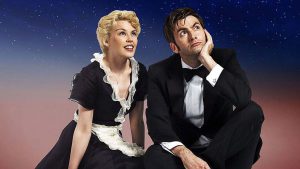 As Doctor Who’s Christmassy take on a disaster movie, Voyage of the Damned may be a bit muddled tonally, but it’s still an enjoyable episode. Like any good disaster movie, the episode introduces an ensemble cast of various characters, each of whom could be killed off at the drop of a hat. But it’s these high stakes that are at odds with the story’s alternatively festive and comedic tone. How are we meant to feel when the comically overweight characters are both brutally dispatched mere minutes after they joke about raiding the ship’s kitchens? Notably, Kylie Minogue is one of the better ham-fisted guest stars, and Astrid Peth is a believable potential companion to the Doctor. However, a muddled tone combined with the episode’s underwhelming villain (George Costigan) make this one of the weaker Tenth Doctor Christmas specials. 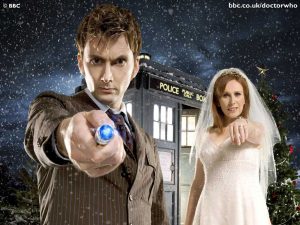 The Tenth Doctor is rocked when a runaway bride (Catherine Tate) suddenly appears in the TARDIS without explanation.

An ultimately fine romp is slightly dampened by the fact it’s just not that Christmassy. It’s tonally confused, having sprung right off the back of the Doctor and Rose’s heartbreaking goodbye in ‘Doomsday’, jumping from the fun ‘Murderous Robot Santas’ into one of the Tenth Doctor’s darkest acts in the bat of an eye. It serves as a nice introduction for comedian Catherine Tate as Donna Noble though, whose return in Series 4 turns her into one of the most memorable companions in Who history. But ultimately, the wedding theme detracts from the festive feel of the special, and the Racnoss (Sarah Parish) is a gimmicky, forgettable villain.

The Eleventh Doctor (Matt Smith) faces the end of his life protecting the Christmas planet of Trenzalore, which is under siege from his greatest foes. 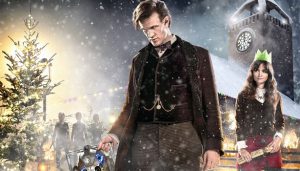 Though it’s not perfect, ‘The Time of the Doctor’ is a better example of how a Christmas special can do serious and fun at the same time. As the door closes on Eleven’s time in the TARDIS, the special survives on the strength of its lead actors, notably in the relationship between Matt Smith and Jenna Coleman. The change that the 50th special ‘The Day of the Doctor’ has had on the Whoniverse is also felt and the Time Lords, though physically absent, throw a game changer into the mix. As with many specials, the episode falls down on its supporting characters (Orla Brady as the forgettable Tasha Lem, and Clara’s cameo family), and also in the fact it has to painfully pull together Steven Moffat’s monumental story arcs. Thank god it’s the last we see of the cracks in time, after nearly four years of them getting old very quickly.

As the ferocious Sycorax descend upon Earth, the newly regenerated Tenth Doctor is the only person who can stop them. It’s a shame he’s unconscious! 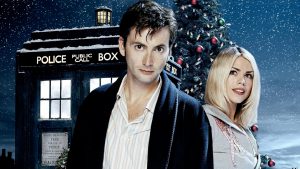 ‘The Christmas Invasion’ not only had to establish the groundwork for all future Doctor Who Christmas specials, it also had the difficult job of introducing audiences to the newest incarnation of the Doctor. Shockingly, it manages to do both superbly. Despite spending the majority of the episode asleep, David Tennant explodes onto our screens as a much more light-hearted and charismatic portrayal of the Time Lord. However, it’s the supporting cast who really shine in the episode. While all the familiar faces from the first series help smooth the transition, it’s Rose (Billie Piper) who takes centre stage as the emotional crux of the episode. My nostalgia might be helping me look past a bit of lacklustre CGI and a couple of cringey lines, but ‘The Christmas Invasion’ will surely be remembered as a Doctor Who classic. 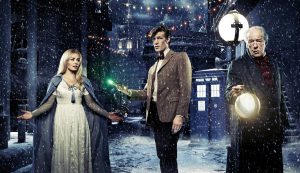 As a starship plummets towards a Christmassy world, the Eleventh Doctor must convince a malevolent dictator (Michael Gambon) to change his ways and save everyone on board.

The best Doctor Who Christmas Special is an ingenious take on Dickens’ Christmas Carol. This whimsical, uplifting story is the perfect Christmas Day tale for all the family, with just the right tone. It’s hilarious, it’s magical, it’s devastating – and Matt Smith is at his best as the Eleventh Doctor. Michael Gambon is one of the most layered villains Doctor Who has ever had, and the apparitions of Ghosts of Christmas Past, Present and Future are geniusly put together and equally heartbreaking. I’ll even look past numerous timey-wimey rule breaks to acknowledge Steven Moffat writes an absolute corker of an episode; it’s just a shame he can’t keep up the standard.

Do you agree with our list? Feel free to tell us we’re wrong in a comment below. However, one thing’s clear; the quality of Doctor Who Christmas specials is rapidly descending. Let’s hope that this year’s ‘The Return of Doctor Mysterio’ can make up for it. Catch it on BBC One at 5.45 on Christmas Day.