Contrary to popular belief, Van Helsing has a gripping start with plenty of action to keep you engaged throughout, and leave you thirsting for more.

New to Netflix, Syfy’s Van Helsing is a gripping revamp of the traditional Abraham Van Helsing canon. His descendent, Vanessa Helsing, awakens in a dilapidated hospital, to a world fallen into chaos after “The Rising” has led vampires to descend upon humanity. Van Helsing has an impressive pedigree and adapts the original vampire hunter, Abraham Van Helsing, from Bram Stoker’s Dracula and the 2004 Van Helsing film with Hugh Jackman. Kelly Overton (True Blood) stars as Vanessa Helsing, alongside a mismatched crew of survivors, including Jonathan Scarfe, Christopher Heyerdahl, Trezzo Mahoro and Rukiya Bernard.

The first episode launches into life violently, as Vanessa is immediately attacked whilst unconscious, and her fledgling abilities are put to the test. It soon jumps back in time to 36 hours previously, where we get acquainted with the state of the world beyond the safety of the hospital the survivors, Vanessa, Doc and Axel, call home. Violence and betrayal keep cropping up as it becomes apparent that the new group of survivors, rescued from the outside world, threaten the safety of the feral vampire, Doc, and the prone Vanessa. The episode begins to reveal tantalising glimpses of what we can expect to see from Vanessa later on in the series, as her powers start to manifest themselves near the end of the first episode. It quickly becomes apparent that she has no idea why she is so special, nor where her daughter, Dylan, is. 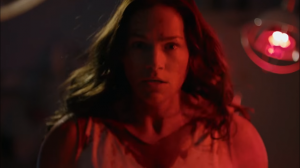 Lots of people seem to be quite unhappy with this series – chiefly in its choice to have a female Van Helsing – but I’m struggling to see why. The first episode is thrilling, dark, full of violence and leaves you eager to know what happens next. The only potential complaint that I can see is that the opening scene where Vanessa is forced to defend herself from a small horde of vampires might be criticised for being a bit overly gory, but that doesn’t seem to stop even after the title rolls. Otherwise, I can’t really fault the first episode. The chemistry between cast members works well and establishes some clear favourites in the diverse cast early on, such as Mohamad (Matoro) and Sam (Heyerdahl), who provide small moments of levity in the otherwise intense start.

All in all, Van Helsing starts strong and leaves you wanting more. With Overton as the star, this adaptation feels new and different; it’s the perfect antidote to a world of people who’ve seen the zombie-ridden apocalypse plot one too many times.

Van Helsing is available to watch now on Netflix.