Read more
You are at:Home»Culture»This Week in Culture: The Man in the High Castle, Mayflower Panto (11/12/16)
By James Barker on December 11, 2016 Culture

Tonight marks a monumental day in the 2016 TV calendar; The X Factor is finally vanquished from our screens, thrown into ITV’s dungeons until it breaks free again next Autumn. While I celebrate, here are some things to watch that are actually worth your time this week. 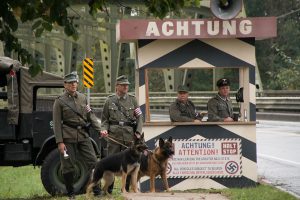 Though as we move into the festive season, there’s little in the way of un-Christmas related shows this week. As a last hurrah for the great TV series’ of 2016 (full list to come very soon…), The Man in the High Castle returns for its second season this week. The Amazon Prime series is an adaptation of the Philip K. Dick book of the same name, set in a world where Germany won the Second World War. In Nazi-regime America, German and Japanese forces are on the edge of war, both at stalemate in their wrestle for power. When a group of unlikely heroes discover a film of the alternative history where we won the war, they set out to see if they can revert time to its rightful self. The second season resumes after the shadowy Tagomi (Cary-Hiroyuki Tagawa) transports into the real modern-day New York. Catch it on Amazon Prime, premiering this Friday, 16th November.

In sadder news, everyone’s favourite nature documentary wraps up this week. The stunning Planet Earth II‘s sixth episode focuses on the newest, fastest developing environment of them all – the city. I’m sure we’ll all be surprised by the thrum of life, ever adapting to survive the human changes to the landscape, that the Planet Earth team find. And, of course, the icing on the cake is the brilliant narration from the King of TV himself, Sir David Attenborough. I’m keeping my fingers crossed for Planet Earth III; but judging by the fact it took them ten years to make this, David Attenborough’s over 90 years old, and 2016 seems determined to snatch all of our national treasures, I’m not gonna hold my breath. The finale of Planet Earth II airs on BBC One, Sunday night at 9pm, and you can bet it’ll get more viewers than The X Factor.

Talking of wrap-ups, Saturday night won’t be the same without Strictly Come Dancing. The show’s taking the world by storm, with over 10 million viewers every night. Its feelgood charm trumps the whiny depression of The X Factor anyday (are you sensing a theme of hatred here?), but alas, the time has come for its 2016 run to come to an end. With it comes the departure of head judge Len Goodman, who’s been sprouting iconic ‘Seeeeven’s and ‘Ten from Len!’s since the show began back in 2004. In the final, Hollyoaks‘ Danny Mac, singer Louise Redknapp and TV presenter Ore Oduba will be battling out for the Glitterball Trophy… The finale of Strictly airs on Saturday 17th December at 6.40pm on BBC One, though the show will be back for its annual Christmas Day special before you know it.

Though the rest of the Culture world is pretty dry in the month of December, one exciting theatre arrival this week is Mayflower‘s Christmas panto, Robin Hood. This year’s stars are EastEnders‘ dynamic duo Jessie Wallace and Shane Richie, aka Kat and Alfie Moon. I’m sure their electric chemistry will carry well into the world of pantomime, and of course, they’ll be a Pantomime Damo to laugh at. Fun for all the family, starting this Saturday (17th December) and running until 8th January!

Next week we will truly be getting in the festive spirit, with a special two-week bumper This Christmas in Culture, where I’ll be picking out Christmas TV picks and maybe even ranting a little bit about the good and bad bits of 2016…