Box Brown presents the unbelievable - but true - story of the origins of Tetris, with an intriguing ability to be as addictive as the game itself.

Video games and the gaming culture have been a mainstay in my life since I can remember. From the (what now seems primative) variant of the game Snake on the Nokia in 1998 to Fallout 4, it’s been a constant escape and something to test my capabilities of problem solving and reflexes. Tetris, however, wasn’t a game that I played as much as I would have liked to – and thusly, it was a game that I knew virtually nothing about until I picked up Box Brown’s Tetris: The Game’s People Play.

For a game with a simple purpose: fit the geometric tetrominoe shapes by rotating the blocks as they fall to position them in a line without any gaps, in which the tetrominoes will disappear. The game will end once all the tetrominoes reach the top of the confounds of the gaming sphere. As the player continues to clear lines and enters new levels, the tetrominoes begin to fall faster, testing the player’s cognitive reflexes; all the while becoming one of the world’s most addictive puzzle-solving games. 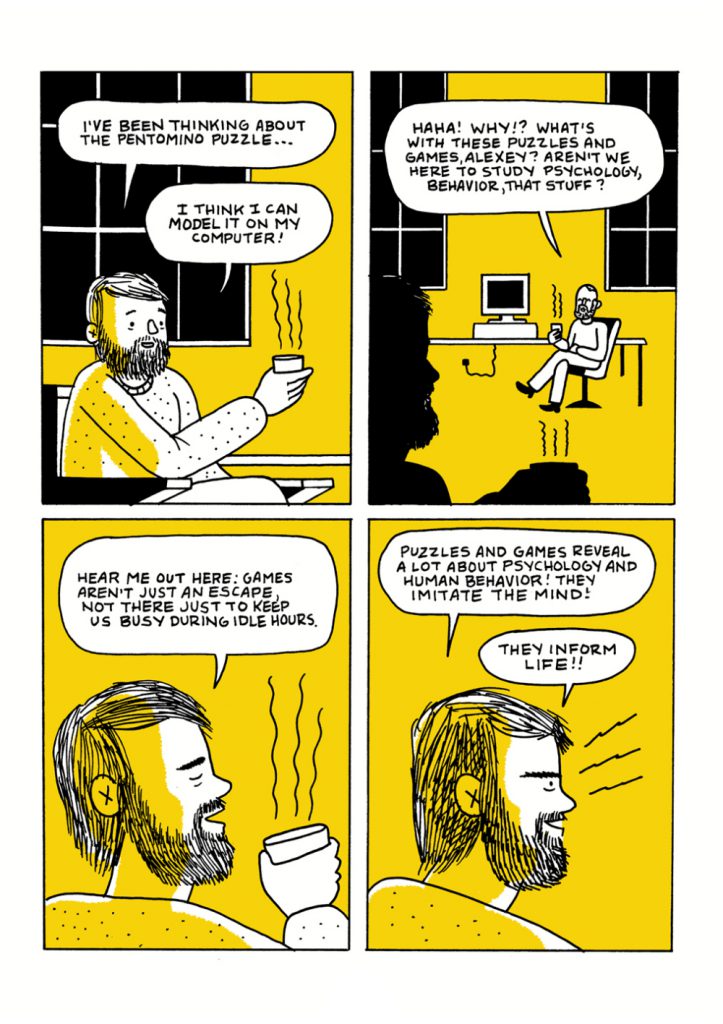 Brian Brown – known as Box Brown – is an American cartoonist who is known both for Retrofit Comics, and the full-length graphic novel about the professional wrestler Andre the Giant entitled Andre the Giant: Life and Legend, published in 2014 by First Second Books. Tetris: The Games People Play is also published by the same company, presented in a similar design and layout, albeit Tetris is displayed in a tonal black and yellow opposed to Andre the Giant’s black and white. Tetris, however, takes inspiration from the consoles in which the game was produced on; namely the first release of the Game Boy. Opening the first panel of the graphic novel, you instantly get hit with a wave of nostalgia for the simpler times of Tetris due to this tonal color change.

The story behind Tetris is insane; unbelievable even. Box Brown is able to crack the surface of it for readers – like myself – that had no idea about the controversy surrounding a simple, Russian puzzle video game. Brown does this by presenting the story behind the creators – Alex Pajitnov and Vladimir Pokhilko – in a captivating form. Not only that, he is able to ponder over the origins of gaming through Pajitnov’s obsessions with solving puzzles and the history behind a number of other gaming companies such as Atari, Sega and Nintendo. Brown displays the complicated turn of events into a simplistic story with the same volume of information spread throughout both text and illustrations.

Both Brown’s and Pajitnov’s passions for their crafts seep through the pages of the novel, as if intertwined with each others brain waves. Even though I had trouble keeping up with the vast amount of names and faces involved with this seemingly non-fictional narrative backdropped by the Cold War, I couldn’t put this book down. Even though I had a predisposition of a gaming background; this book is for everyone. Young and old, Brown is able to hypnotize his readers as did Pajitnov with his players.