A satisfying climax to an enthralling debut season. Combining complex, intelligent writing, cinematic production values and stellar acting, Westworld is a product of the golden age of television.

“These violent delights have violent ends” is a quote that seeps and bleeds into each and every episode of the first season of Westworld, and it’s rousing, game-changing finale is no different. Whilst it marks the end of a number of storylines, it is the brave and shocking start to a new one. As an almost ironic parallel, this also marks the beginning of a show that is set to eclipse everything that has prefaced it so far; what great expectations to come for showrunners Jonathan Nolan and Lisa Joy.

At the heart of the show, it strived to question this fundamental and pertinent question of the nature of consciousness. Can it be created? Where does real consciousness stem from? Do the ‘Hosts’ need consciousness in order to feel real? Those are only some of the burning questions that the show poses both to the characters and the viewers themselves, and within that narrative, it comes to glorious life. 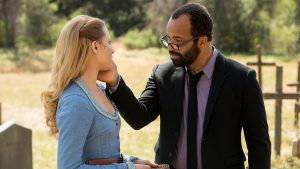 We end where we begin with the all-important narrative that featured Dolores (Evan Rachel-Wood) and her quest to determine her purpose on the path she’s been set on. It was an obvious challenge from the beginning for the writers to make us sympathise with hosts that cannot die. Despite the shocking, twisting drama, the hosts are still essentially only robots who can be repaired, rewired, refreshed and ready to go. It’s a real gift and ultimately a surprise, that Nolan and Joy along with the fantastic work of Evan Rachel-Wood, that Dolores is a character that becomes heartbreakingly tragic. Caught in this struggle to come to terms with her existence, each step towards the centre of the maze humanised her far more than any of her other host counterparts – and this all makes the final episode all the more heartbreaking. Learning previously that it was by her hand that Arnold was killed, it is revealed that in fact it was under his instructions and not Ford’s. The show had (ingeniously) led us to believe that Ford had Arnold killed because they did not see eye-to-eye on the concept of consciousness. In a shocking yet satisfying twist, we find that it was Arnold’s wish to be killed be Dolores to ‘make the consequences feel real’. Arnold didn’t want the park to be opened because he believed that all the hosts had the ability to attain consciousness sooner or later. Dolores and the audience simultaneously realise the grandeur of Arnold’s ideas, and how he was teaching Dolores to listen to her own voice, a thread that had reared it’s head throughout the season. The tables were ultimately turned by this reveal and actually proved that Ford was not entirely against Arnold’s ideas about the Hosts growing consciousness, but the manner in which he wanted it to move forward would have had the ‘real’ Arnold rolling in his grave. 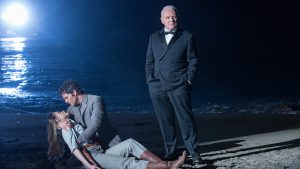 Throughout the season Anthony Hopkins, relishing his meaty role, has been absolutely superb. It’s fair to say in recent years, he hasn’t had to do so much as sleepwalk through the majority of his roles, but close approaching 80 you cannot blame him. His role as Ford is one which he’s ultimately grabbed by the scruff of its neck and made his own. Somewhat channeling that which made his turn as Hannibal Lecter so skin-crawling, Hopkins’ calm and charming demeanor only acts as a façade to the real character underneath. His obsession to control the park and make it his own creation where he stands as god was fantastically realised and developed. He ultimately was in control of everything, every storyline, every narrative, every decision the hosts made was part of his Machiavellian scheme to have the hosts think for themselves. The final shocking scene pulls in so many threads that had been buzzing around right from the beginning.

Of course, this was not the only storyline that the feature-length finale had to wrestle with and thankfully, it was just as adept at doing so. Maeve’s storyline, I confess, was one that had panned out in previous episodes in a way that I had been unimpressed with. The idiocy of the park technicians bordered on the ridiculous and threatened to unravel towards the end. The culmination of her ‘escape plan’ was one that again proved to contain a shocking twist. Despite the show leading us to believe that Maeve was slowly gaining consciousness, and outsmarting her creators by altering her code, it takes a complete left turn and turns the tables on us. Who’d written her new storyline is yet to be revealed, but smart money would be on Ford as it would tie into his plan to have the hosts make their own decisions (hers being the decision to go back into the park to look for her ‘daughter’). Even if the culmination of this narrative hadn’t been as satisfying, you could still somewhat forgive it because of the fantastic performance we got to witness from Thandie Newton. Along with Rachel-Wood, Newton has such great material to sink her teeth into, and she played up Maeve’s traits to perfection. 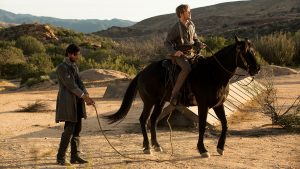 The finale finally also put to bed several fan theories that had been lurking around for quite some time now. Although the idea of the dual timelines being portrayed at the same time was revealed in the penultimate episode, it was driven home here with another reveal that was unfortunately much more predictable. Finally proving that William would grow to become the Man in Black was one that had been theorized quite a while back. However, that does not take away from the fact that both Ed Harris and Jimmi Simpson have been superb in their roles. If this episode does signal the end to that character, it would be a great shame as they both brought a lot to the role in different ways.

Enough cannot be said about the cast, and it’s a testament to the talent on show that I’m yet to even mention the likes of Jeffrey Wright, Tessa Thompson, James Marsden and Rodrigo Santoro. It’s safe to say that their work is uniformly excellent, and proves that HBO live up to the gold standard when it comes to casting.

Lavish production values, a fantastically realised world, a complex and shifting narrative, an ensemble who cannot receive enough plaudits, and a wonderfully written score by Ramin Djawadi (who incorporates covers of famous songs with delightful results); Westworld is seemingly destined to succeed Game of Thrones as HBO’s flagship show. Nolan and Joy have gone on record suggesting that they have plans for several more seasons and if they even begin to touch the work they’ve produced here, we could be in for a treat.