It is hard to deny the popularity of BBC’s Planet Earth II, the long awaited sequel to the original Planet Earth series, which aired in 2006. Since its launch last month the show’s popularity has further skyrocketed, although more surprisingly its breath-taking camera work and closeness to the wildlife action has captured the attention of many young people.

It is truly unbelievable to see the influence that Planet Earth II has had on the younger generation. The Internet has exploded with countless ‘my reaction to Iguana vs. Snake’ videos on YouTube, countless David Attenborough memes and the creation of altered narrative commentaries being relayed over several scenes. The show certainly has a special place on television, and young audiences have found a way to engage with and translate its content across many social media platforms. Its popularity has spread like wildfire, and is certainly a well-respected programme by those both young and old for its ability to relate to so many.

The BBC and The Times recently shared the news that 1.8 million of Planet Earth II’s total viewing numbers were made up of young people aged 16-35, compared to The X Factor’s 1.4 million being of the same age range. Out of a staggering 10.6 million viewers tuning into the second episode of the Attenborough narrated nature-documentary, why are such a large proportion of them from the younger generation?

The X Factor is a front-runner of reality television, alongside Britain’s Got Talent, Strictly Come Dancing, and I’m A Celebrity to name a select few. From its initial and perhaps even humble beginning twelve years ago, the show has developed from feel-good Saturday family television to a highly commercialised and worryingly influential development. Reality television, and the contest show format in particular, has faced an incredible boom in both popularity and scale over the years. To hear that the country’s young people are beginning to turn their attention away from saturated reality television to a nature documentary, narrated by the fantastic Sir David Attenborough, is a welcomed change.

When speaking to The Radio Times, Attenborough made note of the shift in audience: “I’m told that we are attracting a larger than normal number of younger viewers and apparently the music of Hans Zimmer in particular is striking a chord”. The viewing figures perhaps shouldn’t be anywhere near as surprising as 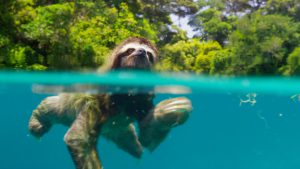 they seem to be. Planet Earth II undeniably transforms the concept of a standard nature documentary into an exciting cinematic experience, which goes some way to explain the show’s success among a generation fuelled by their high media consumption. It offers us the chance to experience something new in an engaging format, and even manages to beautifully dramatize the everyday happenings of a poor Iguana being chased by snakes.

The decline of reality TV must also be acknowledged. We are a generation that is media savvy, and unfortunately for reality television producers, we cannot be completely conned by the idea of pretend talent anymore. Having recently been caught up in many social media discussions about whether the show is fixed, The X Factor undoubtedly fuels many arguments, that debate how ‘real’ reality television actually is. As a generation who have social media at the forefront of their lives, young people are exposed to much deception and falsification, and can judge for themselves whether ‘competition’ reality shows really are as fantastic as they market themselves to be. Shows like Planet Earth and PE II on the other hand undeniably represent a beautifully artistic representation of the real world, not hidden behind a constructed commercial image. We are exposed to elements of the world that we may never see, all from the comfort of our own homes.

With many young people taking an interest in travelling and becoming ever globalised, factual programmes present unpredictable yet personalised stories all drawn from the world, and nature around us. As a young person myself, the show demonstrates that there is enjoyment to be found in understanding our world, rather than attempting to suck some sort of fun from predictable, factory-made ‘reality’ television.

Planet Earth II is a form of escapism that builds personal connections between animals, nature and us sat at home. We develop a personal connection to the survival of an animal, proudly cheering on its attempts to escape a predator. It is fast-paced and unpredictable, and manages to discuss all elements of the natural world in such a way that is engaging for all. On top of its factual content and the behind the scenes element at the end of each episode, the unmistakable narration of David Attenborough is the stamp of authenticity we need to know that what we are watching is a true representation of reality. His factual knowledge, alongside the stunning camera work and enchanting audio, successfully creates the ‘real’ entertainment.

You can view the trailer for BBC’s Planet Earth II here: