Read more
You are at:Home»Culture»Review: The Wind in the Willows at Mayflower Theatre
By Brunna Pimentel on November 21, 2016 Culture, Theatre
80%
80
Adorable

The quintessentially British tale about friendship and adventure is as heartwarming and soul-snuggling as a warm blanket and a hot cup of tea.

Last Friday, I joined Mr Toad, Ratty, Badger and Mole in their whimsical tale about friendship and adventure, now in the form of the new musical based on the seasoned story The Wind in the Willows. This brand new musical features a script by Oscar-winning screenwriter and Downton Abbey creator Julian Fellowes, and an Olivier Award-winning composer and lyricist team in George Stiles and Anthony Drewe. It is currently on a brief UK tour prior to opening in London’s West End. It stars Rufus Hound as Toad, David Birrell as Badger, Fra Fee as Mole, Thomas Howes as Ratty, Neil McDermott as Chief Weasel, and Sophia Nomvete as Mrs Otter. 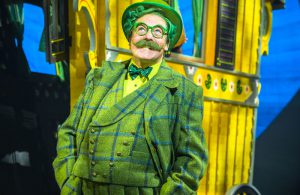 The musical is a heartwarming adaptation of the Kenneth Grahame’s novel, which is undoubtably a childhood favourite for many Brits, and most of those in the audience; however, me and my friend (being from Brazil and Russia) weren’t familiar with the parable, but nonetheless shared in the excitement that was palpable that evening. Some adults with children, but mostly adults with no children, seemed to constitute most of the public at the Mayflower.

The musical started with the charming British countryside in Spring materialised before our eyes. Suddenly a whole world of imagination and wonder opened before me and I was instantly immersed in it. Lovely green leaves were hanging from the ceiling, suggestive of the musical’s title. The whole cast sang a lively opening number about the coming of spring. The costumes were a gentle and very minimal reminder that the characters were members of the fauna, with a few ears and tails, the remainder of the attires being trousers and suits and dresses, or things ‘humans’ might wear. My favourite costumes belonged to 3 actors dressed in period costumes; travelling dresses and caps; and all carried pictures of swallows used to inform the audience what animal they were.

The number at the beginning of the musical where Mole and Ratty are boating down the river made use of the rotating stage and lights, creating the effect of water; all very aesthetically pleasing. Badger’s cosy little den full of books lit up on stage was so great it made me want to be in their alternative universe, where people are animals and live in quaint holes in the ground when winter comes, surrounded by books and cosy blankets. The weirdly angled Toad Hall was very creative as well, with a flavour similar to that of Dr Seuss, or for those who have visited Disneyland, disproportionate dimensions and jagged corners reminiscent of Mickey Mouse’s Toontown. 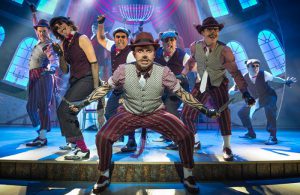 There was a very nice selection of songs in the musical, varying in genres, and the singing from all the actors was exceptional and added dimension to their characters. My favourite has to be ‘A friend is still a friend’, sung twice throughout the musical, most likely due to it being so catchy. Another great number had Neil McDermott as Chief Weasel as the lead singer, with all the Wild-Wooders singing of mischief and sabotage.

The musical stole laughs from the entire audience quite frequently, most of them from Mr Toad’s ridiculousness, which in the second act culminated in him dressing up as a woman in order to escape prison. Another funny and adorable moment could be found when the family of porcupines tried to cross the road, terrified of the automobiles cruising past, and the whole audience gushed at the children actors dressed as the prickly little animals. Perhaps the only small downside of the musical was that some essential plot points could get a little lost in translation at times, perhaps because the stylistic choice of opting for a passing remark about an important event, instead of including it in the main dialogue. There was little reason for Mr Toad’s arrest; the scene skipped from him being in Toad Hall, to under house arrest, to him being in court. His stealing of the automobile was only hinted at by a miniature car whizzing from left to right on the stage in between scenes. Perhaps that could easy be gathered by those familiar with the tale, but for members of the audience who didn’t know the story it was impossible to work out.

However, with great music and superb acting from all involved, I would extremely recommend it to anyone who even remotely enjoyed the fable in their childhood. Any adult now would have something to gain from it, from the funny moments, to the more important messages about life and friendship.

The Wind in the Willows was at Mayflower Theatre from 10th-20th of November. It will arrive at its new home of the London Palladium from June 2017.