Battlefield has got back to the top of the pile of First Person Shooters with its brutal portrayal of World War 1, and the really great multiplayer it has created around this conflict.

After the release of Saving Private Ryan in 1998, nearly every single shooter was set in the past – mainly during the Second World War. Just like the Western in the mid-1960s, the market became oversaturated, and most developers subsequently choose to veer away from these periods of history. After many years of modern and futuristic first person shooters, developers DICE has brought us back to the past, setting Battlefield 1 in the Great War of 1914-1918. The single player’s gritty, multinational take on World War 1 gives a realistic representation of the hell that the soldiers must have gone through. The multiplayer makes great use of the setting with 64 player battles, containing a wide array of tanks, planes and weapons. It is less frustrating than previous entries and is one of the best multiplayer shooters in years. It is definitely the best Battlefield since Bad Company 2.

As previously stated, Battlefield 1’s campaign focuses on multiple viewpoints during the war. Its campaign is set into five different chapters where you take on roles as different soldiers. Whether it’s the African-American ‘Harlem Hell-fighters’ fight against the Germans, the Italians fight against Austria-Hungary, or Lawrence of Arabia’s fight against the Ottomans – it gives a great perspective on how many countries were involved, and that it wasn’t just about Britain and Germany. What it does particularly well is humanise each side. When we think of the Gallipoli campaign we normally think of Winston Churchill’s failed venture, that led to the deaths of hundreds of British troops. We rarely think about the thousands of Ottomans who died defending their homeland. Battlefield 1 hammers home the point that this was a colonial war – there was no clear evil and no real winner. It was a war of competing empires and everyone suffered huge casualties. World War 1 is successfully depicted as a mechanised hell, and credit must be given to the folks at DICE for portraying the conflict fairly. Saying this, the same credit cannot be given to their social media team, who thought it was a good idea to start a hashtag called #JustWW1Things – hugely detracting from the overall respect they had shown. 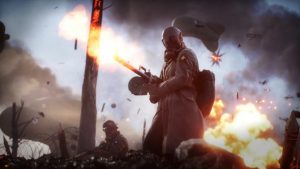 Multiplayer has always been the highlight of any Battlefield game, and it is no different here. Battlefield has never been better and it’s largely thanks to a variety of new tweaks to the game. There are the usually four classes all with unique abilities: the Medic can revive people, the Assault can destroy tanks, and the Support can give out ammo or use a mortar. It’s pretty standard but all have their specific uses. The era’s weapons all had some spice, with mustard gas and flares being particularly effective in holding down choke points. The lack of portable anti-air or anti-tank equipment forces each team to play their roles more effectively to deal with enemy vehicles. The maps also offer some nice variety in gameplay; whether it’s the claustrophobic street warfare in Amien, or the open ended vehicle battles of Sinai Desert, Battlefield 1 excels in letting you take part in large scale battles in different scenarios. They often see a behemoth vehicle enter the fray; either a Dreadnought battleship, an armoured train or a Zeppelin. Taking down the Zeppelin will result in it crashing down to earth, killing anything that is in the impact zone. It is a quite a sight to behold – even more so when you are the one who has brought it down.

The main new draw in terms of game modes is operations. This combines Battlefield‘s main modes, rush and conquest, into a game of tug-of-war usually set across two maps. The back and forth nature of defenders versus attacks helps create the feeling of what the war was like on the borders of France. It is a great new addition and shows off the best aspects of the game. DICE games always look and sound phenomenal, and Battlefield 1 is no different. The dynamic weather system helps change the feel of every map. Sweeping sand storms, heavy rain, or dense fog forces you to adapt on the fly. The guns’ explosions all sound incredibly lifelike, with the physics and animations of the soldiers being great.

Battlefield 1 takes us back in time, bringing with it a fresher and more simple style of gameplay. It is less focused on gun attachments and camo, and more on teamwork and skill. The scale of the multiplayer engagements are a great spectacle, and even more fun to participate in. The single player is a great showcase of what the war was like for various groups involved. It pays great respect to all sides of the conflict and shows how many lives were wasted in the Great War. Battlefield 1 has taken inspiration from the video games of old but has selected a conflict few have tried to portray – it has created a unique and immensely fun game.

Battlefield 1 is available to buy now, for Microsoft Windows, Playstation 4, and Xbox One.