Read more
You are at:Home»Culture»Review: Theatre Group’s Punk Rock at the Annex Theatre
By Carly-May Kavanagh on November 11, 2016 Culture, Theatre

Punk Rock tells the story of seven sixth-formers, all preparing for A levels, aiming for Oxbridge. There’s a new girl, a nervous boy who likes her, a school bully. It all starts as pretty standard, but I promise you, this play becomes the most ‘un-standard’ play you’ve ever seen about school, in the best way. With a range of varied characters, and mental health and current events both hinted at, Theatre Group deliver a fantastic performance. 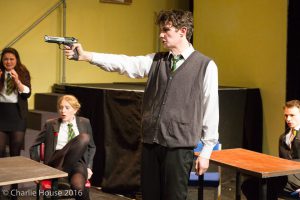 William Carlisle (Rob Bradshaw), the first character we’re introduced to, plays the nervous student expertly, alongside Lilly Cahill (Samena Brunning), with the whole ‘I have a crush on her does she like me back’ situation going on. I can’t say much about him without giving everything away, but you have not seen character development like this before. You develop so many theories about him and his relationships with people – at one point I had a mad theory that him and Lilly were distantly related! (Spoiler – this one’s barking up the wrong tree). I do feel he was a little hard on Lilly for her relationship with Nicholas Chatman (Shihab Abdugadir), which develops a little fast for reality, but hey, this is school. I wouldn’t say you’ll fully understand unhinged William’s actions, but he’s played so well that his character is constantly engaging. Trust me, you’ve never seen someone look so menacing in a cardigan.

Bennett Francis (Marcus Taylor) is the most despicable, deplorable, revolting character possibly ever. Oh I hated him; which is just testament to Francis’ acting. I hoped Cissy Franks (Flora Whitmarsh) would have been able to reign some control over him, but the scene where he forced Tanya Gleason (Phoebe Judd) to put her lipstick on Chadwick Meade (Jonny Clark) was heartbreaking, and all I wanted to do was jump on stage and stop it from happening. Chadwick I felt was pushed to his limits by Bennett, and I was fully expecting him to snap, but he just never did. 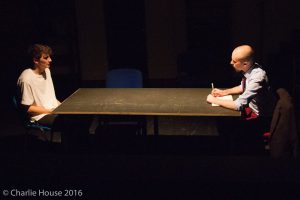 The staging and set were simple, mostly based in a library/rec room. The final scene was one of the most well done, just because of how simplistic and well blocked it was. I will say that I felt at times the positioning of characters was a little clumsy, and very occasionally there were some backs to the audience while speaking, but on the whole it was really well composed. I do wish the play had gone into a little more detail and addressed a few more things, like how William just skipped over Lilly’s self-harming and it was never addressed again. I would have wanted some explanation of what happened to him, the remaining characters and what was wrong with him; but then again, I suppose it’s all somewhat implied.

Punk Rock was one of the most interesting and innovative takes on school I’ve seen in a long time, and I highly recommend going to see any performances involving the cast and crew!

Theatre Group will be performing Animal Farm on November 30th.