Spectacular and suitably strange, David Bowie's lasting legacy can be felt throughout this simple yet intrinsically complex production.

Suitably strange and spectacular in the subtlest, most inventive of ways, David Bowie’s final project, Lazarus, is a complex but enchanting show that tackles the themes of isolation and existential crises with aplomb.

Written by Enda Walsh, with music by Bowie, the musical acts as a sequel to Walter Tevis’ novel, The Man Who Fell To Earth, which was adapted into a film starring the late singer in 1976. Centralising on the role Bowie brought to life on screen, Thomas Jerome Newton (played here by Michael C. Hall), the play is set in a hollow New York apartment. Mourning the loss of his human beau Mary Lou and lamenting his hopeless desertion on earth, Newton is a remarkably static, morose creature; spending his time hooked to the silver screen, drinking gin and eating twinkies.

Interrupting his bleak routine, an angelic conscience-like figure (played by Sophia-Anne Caruso) enters Newton’s consciousness, attempting to revive him from his depression and give him the hope he needs to get back home. At the same time, a more sinister, murderous figure called Valentine (Michael Esper) appears to terrorise Newton and the people around him. Interpreting exactly who these characters are and their purpose in the story is a little mind-boggling, but visually their scenes are a wonder to behold. 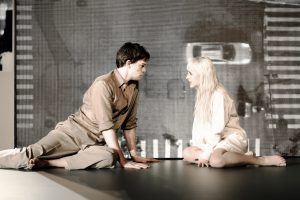 The plot of the story is rather tricky to fully comprehend, even with the contextual knowledge that comes with being familiar with the source material. Characters whose importance are never made clear disperse around Newton, with themes and subplots dancing around the stage almost as much as Michael C. Hall. In Hall at least, there is an understandable appeal; the actor plays this rigid, alien role with immense dedication and proves to hold a very engaging stage presence, even when he’s sidelined in favour of other, less interesting sub-plots. His voice during the musical numbers is also incredible; tinged with a distinct Bowie-like nuance that rings through the theatre.

The young theatre star Caruso carries a similar stage presence, bringing an impressive sense of power and youthful innocence to the production, as well as some very good vocals. Supporting actors such as Amy Lennox, Michael Esper and Tom Parsons also provide good performances, with Esper particularly bringing a strong sense of psychotic menace – reminiscent of the ire of Ramsay Bolton in Game of Thrones.

The best part of the production, as perhaps is to be expected, is the music. Consisting of several classic Bowie songs, as well as three original tracks written by Bowie before his death, the play is tinged with distinct elements of jazz, funk and rock that are wonderfully familiar. Hall’s renditions of ‘Lazarus’, ‘It’s No Game’ and ‘Where Are We Now?’ are particularly good, as are Caruso’s performances as she sings This Is Not America’ and ‘Life On Mars’. The three original tracks, ‘No Plan’ (Caruso), ‘Killing A Little Time’ (Hall) and ‘When I Met You’ (Hall & Cast), are also very good, offering a diversity of styles that is a testament to Bowie’s final legacy.

The production design is also very interesting, as the stage is hallmarked by a large, singular screen which rumbles to life throughout the story to depict a flurry of disparate visuals. The plot also sees the performers writhing against refrigerators, sliding through milk and viciously stabbing at dozens of black balloons – making sure that the production is as bizarre and fascinating to the eyes as it is to the ears.

Though the story itself makes precious little sense, the visual and audible elements of this production are hypnotic enough to capture your attention. Couple that with the intense, dedicated performances and the chest reverberating sounds of the orchestra and you have a theatre experience that you’ll probably like, but won’t fully understand.

Lazarus is set to run at the Kings Cross Theatre in London until 22nd January 2017. For more information, visit the website.