As it’s Halloween, The Edge‘s writers have come together with the most scary moments from their favourite video games. There’s some real nightmare moments in here! 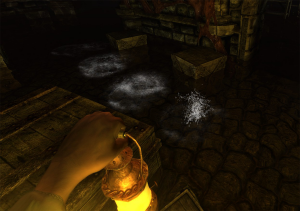 Set in a creepy medieval castle, you begin the game knowing two things: your name is Daniel, and you need to escape. There are no weapons in the game, so if you spot a monster, all you can do is run or hide. The Flooded Archives don’t have any handy cupboards to duck into, though, and my boyfriend and I found that out the hard way by meeting the Kaernk – an invisible water monster. As long as we walked on boxes above water it couldn’t reach us – until it suddenly shoved into the box, knocking Daniel into the water. What followed was five minutes of pure panic as Daniel floundered, losing all of his sanity and sploshing as fast as he could into the next section, slamming the door while hearing the monster hot on his heels. We barricaded it with some handy barrels, assuming the ordeal was over, but apparently the Kaernk can smash through doors too. We started to run in the other direction… only to come face-to-face with a jawless Gatherer and die instantly. As the screen faded into black with the handy hint ‘Run…’, I nearly had a little cry. The sheer powerlessness you experience in the game is unlike any other of its type, and provided us both with nightmare fuel for weeks.

Rule of Rose – The Opening 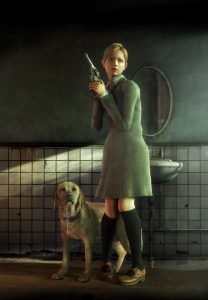 Whilst an overly convoluted plot-line and poor battle mechanics may at times detract from the overall immersion in the game, the depth of toxicity interwoven into the overarching story maintains this games notoriety. Although there are multitudes of hard to watch moments throughout the game, some are far more visceral. It is the initial humiliation which renders the player at a loss as to if they really want to continue.

Within the first half hour of the game the player is faced with the difficulty of death, and in attempting a rescue of our canine companion the player experiences the destructive and overpowering effect of humiliation and helplessness, foreshadowing the rest of the game. As the gang of girls, faces covered, pour water over Jennifer’s numb frame they proceed to push Jennifer into the coffin-like box she has just desperately dug up from the ground, and entrap her inside. Their childish chanting of “ashes to ashes, dust to dust,” momentarily makes us ponder if we are in fact truly dead. By introducing the universal fear of being buried alive into the initial encounter, the tone is set for one of the most disturbing experiences in the gaming world.

Until Dawn – The Wendigo Sequence 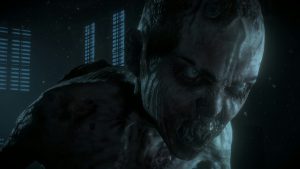 I’m not much of a gamer, but I have still lived and feared certain games vicariously through the wonders of YouTube. I’ve watched Dan and Phil play Five Nights At Freddy’s through my fingers; I’ve watched and jumped at every surprise Xenomorph in Pewdiepie’s gameplay of Alien Isolation. But the scariest gameplay I’ve ever watched has to be Pewdiepie’s run through of Until Dawn. A weird, gruesome and deeply psychological horror game, Until Dawn is consistently terrifying because its story adapts to the choices each player makes. Make a wrong move or a questionable decision and you’ll soon suffer the consequences, as the characters in front of you die in the most gruesome of ways.

Whatever choices you make affects the final outcome, but the penultimate sequence, in which any surviving characters find themselves face to face with vicious, flesh-eating Wendigos, is really scary. Dead-eyed, skeletal and unnervingly creepy, the Wendigos themselves are pretty tough to look at – especially if you flinch during the segment where you are required not to move your controller. In a game where characters can get disembowelled, beheaded, separated from their jaw or hung on a meat hook, it’s hard not to feel uneasy as you watch/play anyway, but the final sequence in the cabin is really tense and pretty damn scary. 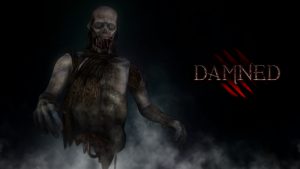 Damned is a randomised horror game for up to five players, four survivors and one monster. If you’re a survivor, your goal is to find all of the keys in the dark haunted place you’re in, using what short lasting light from your torch you have. Monster? Stop them and kill them.

It isn’t a long game, anywhere from 5-20 minutes each time depending on luck and the player’s skills, but you’re unlikely to play the same kind of game twice. The way to escape each time is randomised, the monster, your tactics. You can have some kind of tactic for escaping but for the most part you’re pretty defenceless. You can’t directly attack the monster but mostly all you can do is run and hide.

And the monster will affect the time and your fear level – there’s Mary, the murder-nurse, who’s just going to kill you and it’s best to accept it. Don’t look behind you. The lurker sets off sound traps, so if you activate it he knows where you are – you can’t see him unless he’s in his physical form and he can’t see you. Fallen, think the scary angels from Doctor Who, who place 12-14 traps to hunt the survivors and spawns statues for every 2 traps activated, which of course then means that she can see you if you’re near to her.

And the phantom, my personal favourite, will only see you when you’re moving; to move is to die. I once trapped a friend in the corner of a room and he knew there was nowhere to hide…

Feeling brave? How hard can it be, right? 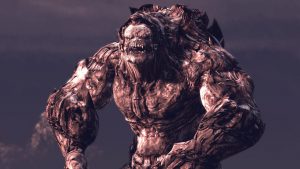 The original Gears of War was no doubt an over the top action game but it never strayed away from horror. Creepy derelict refineries and mansions infested with the Locust hordes added to the overall tone and some of the enemies, like the birds of death-the krill, were downright creepy. None came close to the Berserker you would encounter in an abandon church. The Berserker is a 10ft humanoid beast that possess superhuman strength and speed. After he already slaughtered one of you comrades you are tasked with battling the monstrosity. He is essentially invincible and you are only able to kill him with the ‘Hammer of Dawn’, a device that can call down a laser from a satellite. The problem is that it doesn’t work indoors and you must lure the Berserker outside. The beast is blind so you must make him chase after you by shooting him or clumsily running away. The road to the outdoors is long and the Berserker will no doubt kill you a couple times before you complete this segment. The whole sequence was a terrifying surprise that will live long in the scarred psyche of children (like myself) who decided to play a game that was obviously designed for an adult audience. 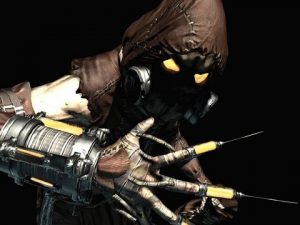 Arkham Asylum has plenty of moments which can constitute jump-scares, or just plain freaky or deranged moments. But none really compares to the monstrosity which is the cat-and-mouse Scarecrow level. In a hallucinogenic, dark world, Batman is chased around ruined buildings and desolated distorted ruins in a bid to avoid the piercing gaze that comes from the Scarecrow. The most deranged element of it is the background music, which seems to just suck any life and happiness out of the atmosphere, being dark, dreary and nightmarish. The Scarecrow mazes have obvious ways to get through them, but being caught in the piercing blinding light will instantly kill Batman. The drugged state suggests an artificial world, but the reality of death is all too real. The second scene, with the murder of his parents is even darker, and perhaps one of the most twisted cutscenes in the whole series. He doesn’t get anywhere near as much time in the game as the Joker, but the Scarecrow manages to be much more terrifying, because of how real it feels, and also, because we see the darker side of the Dark Knight.

So if it’s real scares you’re looking for this Halloween, spend the night with your favourite gaming console, and pitch yourself against these terrors for the night…