From the mind of multi-media star Donald Glover, or as you may know him, Childish Gambino, comes the highly anticipated comedy-drama Atlanta. With a cast headlined by Glover himself, and including Brian Tyree Henry, Keith Stanfield and Zazie Beetz, Atlanta tells the story of Earn Marks (Glover), an ambitious college dropout, who seeks to help his rapper cousin Alfred Miles (Henry) as his music career takes off.

Taking its name from its city setting, Atlanta promises to be an intriguing and unique show among the regular slate of comedy currently on television. Blending drama and comedy in this manner is the perfect way for a show like Atlanta to turn heads; the premise and backdrop is ripe for dramatic heft and intriguing stories, whilst the comedy provides it with a lighter edge and more accessibility for general audiences. It’s undoubtedly an ambitious project for Glover to attempt, but the rapper-comedian-actor is somewhat of a seasoned veteran in TV comedy. Having been hired as a writer at the age of just 21 for 30 Rock, Glover was able to flourish under the likely tutelage of Tina Fey, before being cast by Dan Harmon in cult comedy Community, his best known role to date. With roles in The Martian and the upcoming Spider-Man: Homecoming under his belt, Glover is clearly an in demand talent with a clear marketability to his name to aid Atlanta. 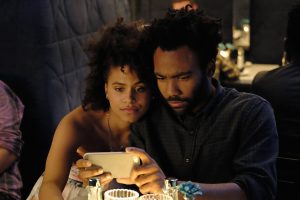 But as mentioned before, you may know Donald Glover better for his rapper alias, Childish Gambino. And it’s this fact that inspires that much more confidence in Atlanta. Despite only having two albums, two EPs and seven mixtapes to his name, Glover’s understanding of rap and hip-hop is quite remarkable; his music is unique and oozes with confidence and charisma. But having been influenced by the likes of Jay-Z, Kanye West and Wu-Tang Clan, you really wouldn’t expect anything else. Glover’s firsthand knowledge of the show’s premise should help to give Atlanta a sense of realism and be able to keep it grounded, as opposed to becoming overly self-indulgent and too unbelievable. And it’s obvious to see why Glover would want to pay homage to the city of Atlanta in such a way, as after all its hip-hop scene has produced some of the most famous acts in the genre including Usher, Gnarls Barkley and Outkast. Atlanta is a meeting of Glover’s two passions; comedy and hip-hop. 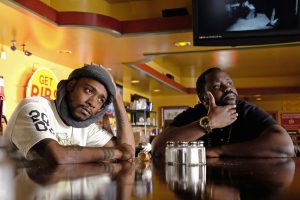 Now we know about Glover’s many accolades and talents, but the highly promising cast alongside him shouldn’t be underestimated. Newcomers Brian Tyree Henry and Zazie Beetz should find the show to be an excellent launch pad for themselves to showcase what they can do. However, it’s the addition of Keith Stanfield which is arguably the most exciting part of the show. Having debuted back in 2013 in the excellent Short Term 12, Stanfield has since gone on to star in The Purge: Anarchy, Selma, Dope and Straight Outta Compton (in the latter as Snoop Dogg nonetheless), and has established himself as one of the most exciting young actors in the industry. Atlanta should really help to solidify him as the star that he will inevitably become.

Early word is in from the States, where the first couple of episodes have aired, and the reviews are stellar. Described as original, ambitious and real, Atlanta is one of the best reviewed TV shows of the year so far, making the prospect of its UK debut that much more exciting. It looks to be a real breath of fresh air for television, one that you really should not miss out on.

Atlanta will premiere in November on FOX.