Gears of War 4 starts off a new saga, while keeping intact what made the originals great.

September 2011 saw the Gears of War trilogy wrap up in a nice, emotional, bow. Five years later, Gears returns with a new development team, The Coalition, and a new set of characters, set twenty-five years after Gears of War 3. The game has been drawing a lot of comparison with Star Wars: The Force Awakens. The series creator, Cliff Bleszinski, has given the reigns to a new team much like George Lucas did. I can safely say, the newest iteration of Gears has done for the series what Episode VII did for Star Wars. It is a return to the series’ roots, while kickstarting a new saga off. The new additions to the classic multiplayer modes, competitive and horde, further enhance the playing experience.

Gears of War has never changed the core of its gameplay since 2006. This isn’t because the series has grown stale and stagnant – when the core of the game is so good, why would you change it? It’s the Gears you know and love with a few tweaks. You can now pull enemies over cover to perform a satisfyingly gory knife kill. Most of the classic gameplay remains intact, save for this change, but the new weapons really shake things up. The ‘Buzzkill’ is a construction tool that fires saw blades that can bounce of the environment, making it a lot easier to take out enemies in cover. The ‘Dropshot’ shoots a flying grenade that explodes when you let go of the trigger during its flight. They are immensely enjoyable to wield, but when enemies use them, it forces you to think and change your tactics on the fly. The new Swarm enemies will charge you directly a lot more than their Locust counterparts, resulting in a lot of death at the hands of a chainsaw bayonet. A new feature to the world of Sera is the frequent storms and hurricanes it experiences due to the impact of the past games. These storms will sweep the battlefield, making some guns not able to shoot straight. In these segments you can shoot objects to be swept up by the wind and perhaps kill some enemies, such as a crate of steel beams. It adds some nice variety to gun battles. 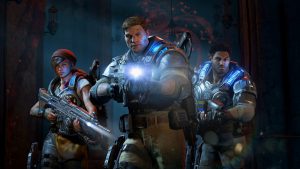 In terms of the story, the new Gears is a mix of old and new. You play as the legendary Marcus Fenix’s son, J.D., or James Dominic (named after Marcus’ fallen friend Dom Santiago) with his new pair of friends, Del and Kait. They are also joined by Marcus (again voiced by John DiMaggio, also the voice of Futurama’s Bender) as they embark on a quest to discover if an old foe has re-emerged decades after their defeat. The story is relatively straight forward, more in the vein of the original than its sequels, but is enjoyable nonetheless. This is helped by the genuinely funny banter between the four of them, which is consistent throughout. Seeing some of the old crew return in the game is extremely heartwarming but the world (much like in Episode VII) is left unexplained and ambiguous. Apart from a few hints, we still aren’t completely sure what the world of Sera looks like 25 years after the devastation caused by the Lambent and Locust. It leaves much of this to be explored in the new entries in the future. Gears has also partly gone back to its horror roots, with the Swarm’s origin being genuinely disgusting and the new ‘Juvi’ enemies being very creepy. Placing these aspects in deserted museums and factories pays off in creating Gears 4’s tone. 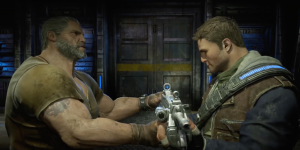 J.D and Marcus – Credit: The Coalition/Microsoft

In terms of graphics Gears 4 looks great. With mix of locales encompassing lush green fields, a dark lonely mansion and an abandoned power plant; all provide variety to the look of the game. When a electrical storm sweeps Gears really shows off its graphical prowess. The sky will turn many shades of red and orange, lighting will strike all across the ground and debris will fly across the battlefield. As well as the great graphics Gears sounds amazing. Whether it’s the roar of the Lancer or satisfying squash of a Swarm’s face being stomped in, its delightfully over the top. The voice acting is all great and DiMaggio’s subdued performance as Marcus really adds a new dimension to this fan favourite character. The iconic sounds of the franchise remains intact.

As much as Gears is loved for its single player, it’s more often heralded for its multiplayer. Gears is back and better than ever in this respect. The usual slew of multiplayer modes have returned and feel fresher thanks to the game’s new mechanics and weapons. The highlight is still Warzone, a round based, one life only team deathmatch that has been a staple of the series since the beginning. Having one life makes every brutal execution or sniper kill feel that much more sweet with the knowledge that enemy will not be re-spawning.

If there is one complaint with the multiplayer, it’s one word every Gears player either loves or loathes: Gnasher. The Gnasher is a shotgun which is absolutely devastating. As such it has become the weapon of choice for Gears players since 2006. It’s still is as powerful as ever and for me, it is really frustrating that is hasn’t been really nerfed in 10 years. However, many see it as a staple of Gears multiplayer, so it probably won’t change post-launch. The co op mode ‘Horde’ has also made a return but has seen an upgrade. The match now revolves around the use of the ‘Fabricator’: a 3D printer that can make anything from turrets, barbed wire fencers or Lancers-for a price of course. To complete the mode you must survive 50 waves of enemies with every 10th wave seeing a boss come to the map. Its is as good as ever and one of the best features of Gears 4.

While a lot has changed in Gears of War 4, much has stayed the same. While this is detrimental in many a series, it is a positive in this case. Like JJ Abrams’ The Force Awakens, The Coalition has successfully blended old and new into one great package. The single player is an enjoyable new start to the franchise and the multiplayer offering is as robust as ever. It is a worthy addition to the Gears franchise and I can’t wait to see where the series goes next.

Gears of War 4 was released on October 11th on Xbox One and Windows plc.