The new Doctor Who spin-off Class is an interesting amalgamation of its predecessors in the Who universe. The show concerns a group of schoolkids navigating their teenage years and saving the universe – a very Sarah Jane Adventures concept – but, like Torchwood before it, Class is to debut on BBC Three with ‘adult themes’ of sex, grief and heartbreak. It fills me with hope that esteemed writer Patrick Ness, Class‘ creator and sole writer, is planning a realistic portrayal of what it’s like to grow up in the twenty-first century – with aliens added in the mix.

Patrick Ness’ involvement in the project is enough to get you excited alone. The author prides himself on his dedication to Young Adult Fiction, and Young Adults love him in return. The Carnegie-winning Ness is responsible for the hugely popular Chaos Walking trilogy, and the universally-adored A Monster Calls, which has been adapted into a film starring Liam Neeson and Sigourney Weaver. Though this is Ness’ first venture into the world of television, he is the perfect choice to explore a new area of the Who universe, especially one so focused around young adults. Let’s just hope that Steven Moffat (Who‘s controversial showrunner and exec producer for Class) doesn’t screw things up with over-complicated timey-wimey bullshit. 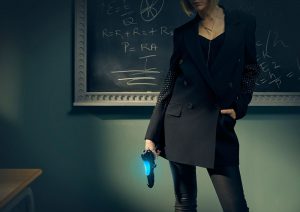 The premise of Class has been largely shrouded in mystery, and while castings announced back in April, there was no information on the characters they would be playing. Coronation Street icon Katherine Kelly was the most exciting and notable amongst the regular cast. She has since been revealed to be playing Physics teacher Miss Quill, and in the recently released teaser trailer, her presence looks to be an intimidating, not be messed with, one. Her short bob haircut, stylish outfit, and high-tech gun make her look more spy than secondary school teacher. Will Miss Quill be hero or villain, or, in keeping with Ness’ realism goals, somewhere in-between?

A fresh faced cast of young actors will be in the lead roles, playing a group of Coal Hill students thrown into the action. Newcomers Greg Austin, Fady Elsayed, Sophie Hopkins and Vivian Oparah will star as Charlie, Ram, April and Tanya, sixth formers dealing with both aliens and the stresses of teenage life – “parents, school work, sex and sorrow”, the official premise reads. The trailer hints at a humourous moment where two of the teens discuss saving the world over Skype, only for the girl’s mother to scold her for talking to a boy in her bedroom. We can all hope for some Inbetweeners-esque moments like Simon (Joe Thomas) screaming at his parents from on top of the shed for trying to move him away from his friends.

Coal Hill Academy returns, originally featured 50 years ago in the first year of Who and then again in recent series as Clara Oswald’s (Jenna Coleman) place of work. It feels an odd move to set a spin-off at the school after Coleman’s departure from the franchise, but, fear not, a character who is returning is insignificant, forgettable ‘Mr Armitage’, played by Nigel Betts. Mr Armitage appeared in a few scenes of Who‘s eighth series, so I don’t expect you to remember him, though judging by his role in those episode, Betts will be more of a comic relief for the series, akin to Mr Flatley in the children’s series M.I. High.

Class may be a sign of Doctor Who finally catching up with the times as well, as for the first time since Captain Jack (John Barrowman), they have a lead character from the LGBT+ society! According to Ness (and briefly seen in the trailer), one of the male leads is gay, with a boyfriend. Moffat’s era of Who in particular has been defined by stereotypical characters, especially when it comes to companions, so it’s great to see an again more realistic portrayal of the world we live in.

Finally, perhaps the most exciting recent news is that the Doctor himself will be in the opening episode of Class. In this Who-drought, many will cheer to learn that Peter Capaldi will be present to kick off proceedings. I just hope he doesn’t overshadow the introduction of the new main cast with his larger-than-life presence. I’m sure we can all agree though that Matt Lucas’ bizarre and dreadful character Nardole should go nowhere near the show, despite the odd decision to have him return for the new series of Who and its Christmas special. Class holds more of my hopes for the universe than actual Doctor Who itself at the moment.

Class comes to BBC Three Online with its two opening episodes on 22 October 2016. The 8 episode long series, all written by Patrick Ness, will then continue to appear weekly on Saturdays.