Read more
You are at:Home»Culture»This Week In Culture: Scream Queens, The Complete Deaths (09/10/16)
By James Barker on October 9, 2016 Culture

The King of American TV right now is undoubtedly Ryan Murphy. The screenwriter, director and producer is not only responsible for the crowning gem of TV currently, American Horror Story, but also The People vs. OJ Simpson, which scooped the most prizes at this year’s Emmys, musical comedy Glee, which inspired an entire community of ‘Gleek’ fans), and comedy horror TV series Scream Queens – which returns for its second season this week. 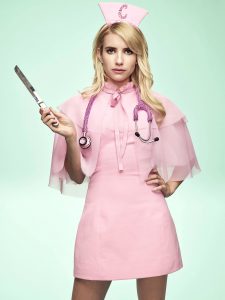 Scream Queens combines two vastly different genres, comedy and horror, and mashes them together into a teenage TV star fest. Emma Roberts leads the cast as Chanel Oberlin, a sorority sister president and all-round bitch, and target of the horrific events going on at her school. Season 2 takes the drama to a hospital setting, where a new serial killer, ‘The Green Meanie’ (successor of ‘The Red Devil’ in Season 1) is decapitating patients and staff with a machete. Cheery! The all-star cast also includes Glee star Lea Michele, Twilight buff Taylor Lautner, and Jamie Lee Curtis. Scream Queens Season 2 arrives on E4 on Thursday 13th October, at 10pm.

Also returning this week is the acclaimed BBC drama The Missing. The first series of the show blew audiences away back in 2014, with James Nesbitt and Frances O’Connor as tortured parents of a missing boy. The second series picks up on a new case, with David Morrissey and Keeley Hawes as a couple whose daughter returns after nine years of being ‘missing’. Tchéky Karyo returns as French detective Julien Baptiste, and Laura Fraser, who had a big role in Harry and Jack Williams’ recent drama One of Us, also joins the cast. You can catch the new series Wednesday nights on BBC One, starting on 12th October. 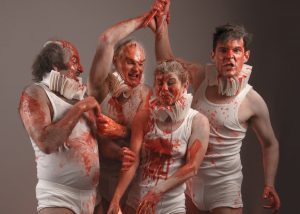 There are 74 deaths in the entire works of William Shakespeare, and this week, an ambitious new show at the Nuffield attempts to recreate all of them, to celebrate the 400th anniversary of the Bard’s death. The Complete Deaths comes from a troupe called ‘Spymonkey’ – ‘four seriously, outrageously, cleverly funny clowns’ – who will play out every Shakespearean death from the carnage at the end of Hamlet to the Roman suicides in Julius Caesar. It’s always good to see the funny side in death! The Complete Deaths come from the mind of Tim Crouch, and arrives at the Nuffield Theatre from Tuesday 11th to Saturday 15th October, with tickets to be found on the Nuffield’s website.

This week sees the new Gears of War game arrive. The fourth in the franchise, it is the first not to be developed by Epic Games, with The Coalition taking over control. With a new combat knife feature, but all the old Gears of War gameplay features fans have come to love, it’s a heavily anticipated game. It focuses on the child of the original protagonists Marcus Fenix and Anya Stroud, J.D. Fenix (Liam McIntyre), with a new team to deal with the threat of the end of humanity. Gears of War 4 arrives on 11th October.