Read more
You are at:Home»Culture»Review: Dedication at the Nuffield Theatre
By Olivia Krauze and Bruno Russell on October 3, 2016 Culture, Theatre
80%
80
Innovative

A cool, modern and original piece of theatre.

Dedication builds a fictional story around one of the pieces of ‘hot gossip’ of the late Tudor court: the potential homosexual relationship of William Shakespeare and the Earl of Southampton. Based on the historically accurate dedications Shakespeare did indeed make, it explores what the reality of such a relationship, had it been true, would have been like. In doing such we enter the murky world of Tudor politics as ‘love’ becomes shown as something not to be cherished. As a concept and plot-line this is clever, and offers lots of potential to work within while, at the same time, constraining it enough in terms of chronology and geography. The play is wrote by award-winning playwright Nick Dear (famous for Benedict Cumberbatch’s Frankenstein), and you certainly get a sense of the quirkiness and emotional vulnerability Frankenstein had at play again here.

Dedication is ingeniously staged at Southampton’s very own Nuffield Theatre. The usual performance space is almost unrecognisable: an in-the-round set up, a central shiny black platform and pillars, all complete with a revolve – think ITV’s The Cube. It sounds like a lot to take in, but the mirror-like surface of the stage fittingly reflects the unravelling of secrets within the play, whilst a flashing screen reminding the audience which version of events they are watching adds to the surreal atmosphere of the piece. We’re not forced to accept the action before us as hard truth, but rather to question it, to become enveloped in the play’s web of interpretation and its dream-like scene changes. Praise must go to set designer Alex Lowde and lighting designer Tim Deiling for creating this effect. At points, this did stagnate, and you almost wished something extra would be introduced, but the simplicity and openness of it as a presentation and concept seems a lot more valuable. 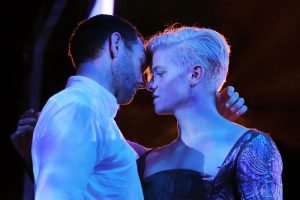 A two-man production is never without risk. The standout performer was Tom Rhys Harries, portraying Southampton in a quirky, humorous, yet emotionally fuelled performance. He brought an excellent light-and-shade to a complex character; Southampton comes across as both vain and demanding, yet deeply lonely and fragile, leaving us never completely sure in what direction the character would go next. This even included sections requiring him to be in female dress to give a sense of Southampton’s ‘madness’, though this was enacted with great sensitivity. In contrast, Tom McKay makes for quite an average Shakespeare (ironically). Although both Harries and Tom McKay undoubtedly retain the audience throughout, at times it feels like there isn’t much for them to do, apart from repeatedly dressing and undressing. That said, Dear’s refreshing use of the Canario as a framing device plays out beautifully on stage – there is really no need for anything else other than the central couple’s final dance to achieve a truly touching, bitter-sweet ending. 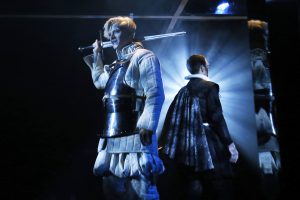 Overall, Dedication showcases some great writing, interestingly depicting not only the many interpretations surrounding its central characters’ relationship, but also the uncertainty of the past in general. Due to the lack of interval, it is an intense 90 minute glimpse into the world of a writer and his patron, be their relationship what it may. All is bared to the jury-like audience, who are invited to judge William Shakespeare not only for his possible involvement in high treason, but also his own personal handling of a topic he wrote so prolifically about – love. It could not be further from the period costume romp one might expect; contrarily, it is a cool, modern and original piece of theatre, and definitely not one to be missed.

Dedication is showing at the Nuffield Theatre until 8th October 2016. Tickets can be purchased here.