What do you get if you put one of the Nolan brothers, the man that made successes of both Star Trek and Star Wars, and the man that created Jurassic Park, in one big mixing pot? With any luck, an amazing TV show.

I’m of course talking about Westworld, the new western-sci-fi (yes, really) coming to Sky Atlantic this week. Its stars a whole heap of talent, from Sir Anthony Hopkins, to the new Thor girl Tessa Thompson, Scott Summers actor James Marsden, and the third Hemsworth brother, Luke, to name just a few. If you have managed not to pass out with excitement and are still reading this article, Westworld tells the story of an eponymous futuristic western theme park, so Michael Crichton, creator of Jurassic Park, is naturally in his element. J.J. Abrams serves as executive producer, while Jonathan Nolan developed the series and directs the first episode. Oh, and the man that came up with the Game of Thrones theme tune is on soundtrack duty. With an unrivaled plethora of talent, Westworld is definitely not to be missed; it arrives to Sky Atlantic on Tuesday 4th October, at 9pm.

Also arriving on Tuesday is the new season of musical-drama Empire. The show premiered last year to great success, and is back for outing number three already. The show concerns the power struggle of the Lyon family, aptly named for their place at the top of musical food-chain and their ruthlessness when it comes to business. Even within their own ‘pride’, the battle is on for control of their hip hop company, Empire Entertainment. This season sees tensions between couple Lucious (Terrence Howard) and Cookie (Taraji P. Henson) reach breaking point – can they live with or without each other? The family feud could see the Lyon family topple… Empire returns to E4 on the 4th October, at 10pm. 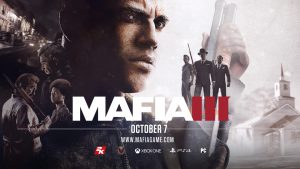 If you’re not busy pitching the big football games against each other this week (see our reviews of PES and FIFA for more on that), you’ll be interested to see the eagerly anticipated Mafia III arrive. Set in 1968 in the city of New Bordeaux, a fictional recreation of New Orleans, the story revolves around Lincoln Clay, an orphan and a Vietnam War veteran, who is on a quest to build a new crime organization to confront the Italian mob. The last instalment was back in 2010, so fans have been waiting quite a while! Mafia III arrives for Playstation, Xbox and Windows consoles on Friday 7th October.

It’s been a good year for Harry Potter fans! We’ve had Cursed Child running in London since the summer (which I am lucky enough to be going to see this week! Review coming soon…), and Fantastic Beasts is out in just under 50 days! In the meantime, satisfy your Potter cravings with the illustrated version of Harry Potter and the Chamber of Secrets. The first one was released to great success last year, with beautiful illustrations from Jim Kay. This book is not to be missed, and arrives in bookshops on October 4th.