While PES 2017 lacks licensing and has some occasional bugs, it still retains and improves what has made the series special.

In recent years, the PES franchise has seen a resurgence in popularity and quality. Last year’s game was a massive improvement and the newest instalment, PES 2017, while not as revolutionary, tightens and improves what made 2016 so great. It still has small bugs and weird problems, but it is definitely the best football game made thus far.

If you’re looking for an authentic match day experience, you won’t find it in PES. The game’s inconsistent licensing means you won’t be able to play as realistic versions of your favourite teams in England. This year PES doesn’t have the rights to La Liga (apart from Atletico Madrid and Barcelona), nor can you play as Manchester United. It does now have Liverpool, Arsenal and Borussia Dortmund for the first time in years, and the Champions and Europa Leagues do return. The silver lining is that PES’ teams, leagues and kits are completely customisable. Online, you can find all the authentic kits across all the leagues that PES does not contain. I easily uploaded Championship, Premier League and La Liga kits in minutes via a USB (this is only for the PS4 version though). On the audio side, commentators are abysmal, way overreacting to events on the pitch, and often very delayed in their responses. Their speech is robotic and it’s best if you just turn them off altogether. 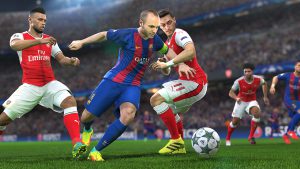 In terms of graphics, PES 2017 is stunning. Whether is be sweat and rain droplets falling down a player’s face, or the tiny hairs in a player’s beard, its presentation is great. This is thanks, in large part, to the Fox engine, developed by Hideo Kojima, which makes most big name players look incredibly lifelike. The beautiful game has never looked so good.

Konami have listened to the complaints of last year and overhauled many elements of play. Goalkeepers have received a massive upgrade and the world’s best will produce some amazing saves. There is still the odd occasion when your keeper will flap at a seemingly easy shot, but thankfully it’s a lot less prevalent than last year. Shooting has also been overhauled, with each shot feeling suitably weighty, making scoring goals from distance a bit easier. Recent PES games have always had physicality as a key pillar and, again, this has received an improvement. Players are far more willing to go shoulder to shoulder with their opponents and shield the ball during hold up play. This change has also provided the biggest new problem however. Many times I’ve been clearly obstructed from the ball by the opposing team, but the ref has not given me a free kick. This happens far too much and in competitive online play, it is really frustrating. Hopefully can be patched up in the months ahead. As for the other elements of gameplay, they are all excellent. The AI is very intelligent and will frequently make great runs to support you attack or put themselves in suitable positions to intercept passes. Overall, it’s very smooth and you always feel in complete control of your team’s actions.

PES is less imaginative with its game modes and there is nothing like FIFA’s ‘The Journey’ to be found here. You have the standard slew of managerial modes and careers for one sole player. For me the main draw is PES’ ultimate team equivalent: MyClub. This sees you build your own squad and compete in online seasons and competitions. The learning curve is pretty steep this year due to the roulette-style way of attaining players being tailored towards mediocrity. It is far harder to get quality players and I fear, given Konami’s history, it’s been done to increase sales of its online currency. Its is easy to survive without buying any micro transactions but the starting slog can force you into it. I received Neymar and Iniesta as my starting players, and still really struggled. However, once you get going, MyClub is addictive fun.

PES has now reached its peak and does not need to innovate as much as before, but due to its improvements mechanically and graphically it’s the best football game on the market currently. Its quality gameplay and great MyClub game mode will keep you coming back all year.