With 'interesting' edits, this year's six-seat challenge was delivered with tension and drama throughout. Sadly, though, this was marred by uncomfortable scenes, that ended up on the wrong side of entertainment. 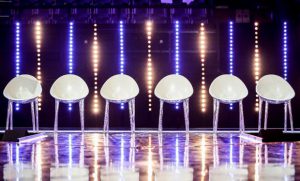 Six-seat challenge is back! [Radio Times]

Having been back for a month, The X Factor has now entered its notorious ‘six-seat challenge’ stage. This section of the competition has previously been criticized for being overly vicious – and this year’s edition lived up to that status. At times, this was brilliant television, leaving you tensely waiting or angrily engaging with the screen. At others though, it tipped the balance as you felt more uncomfortable than entertained, with some people begging for their spots, before having it taken away again. It became a very cruel game of musical chairs. Equally, having attended the live filming of the six-chair challenge myself, parts of the show were deliberately edited in such a way as to manipulate how events unfolded; for example adding the audience chants of ‘Bring Them Back’ to some acts that did not get them and removing sections where judges more carefully selected acts to make them look more incompetent, such as Nicole’s reconsideration of James Hughes and Louis’ sing off (which was just made out as some weird ‘stand-up on the stage’) between Girl Next Door, Four of Diamonds and Skarl3t.

To criticise the concept of the six-seat challenge is somewhat uninteresting though. Though it is very brutal, it certainly does pull in the figures, even if the contestants do become pawns in ITV’s quest for talent-show entertainment. It gets people talking, makes singers battle, and draws in the audience. What is slightly more interesting is that certainly this year’s six-chair challenge was better than last years. One reason was because certain categories were done, I’m sure to Simon Cowell’s disappointment, with great ease. Cowell said before the show started ‘let’s make this as hard as possible’. This meant that for 4-hours, combining Saturday and Sunday’s show, you were left on the edge of your seat. We were very much aware that nobody was safe and fan-favourites, such as Girl Next Door and Saara Aalto, fell to public disappointment. Equally those that the public may not have wanted to advance, such as Octavia and Bradley, find themselves jetting off next week. Some people delivered fantastic emotional performances, specifically Christian Burrows, who was left singing off against his friend Matt Terry in a nail-biting finale to Nicole’s challenge (and you can see the video below). The show is about making you sweat, and you certainly wore your heart on sleeve waiting to find out the fate of your favourites. Though there are flaws to come, six-seat challenge certainly delivered the drama and kept you engaged, unlike previous years or this years bootcamp stage. 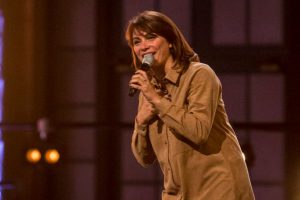 Rebekah was left uncomfortably begging for her place [ITV]

The main problem with it this year, and the reason this heightened drama and tension was somewhat deflated, was the uncomfortability of sections of the program. This is specifically in regard to Sharon Osbourne’s Overs Category, which on several occasions were crying and begging to be given a seat. Rebekah Ryan even admitted after the judges critique ‘I am desperate. I need a seat’ and her continued begging, with Sharon still refusing to give her a seat, became painful. Perhaps it’s because they have waited longer for this, and for some they may see it as their last opportunity, but it’s hard to find this desperation appealing. You just wanted the programme to move on to the next act. There is a fine line between, on the one hand, a programme entertaining through tension and evoking pity, and on the other, attempting to entertain by seeing someone beg before having their dreams shattered. The begging did not need to be televised. As one contestant put it, this whole stage is nothing more than ‘being fed to the lions’. 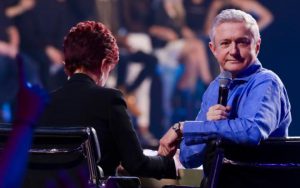 Louis struggled to make his mind up [Telegraph]

The other disappointing feature for me was certainly the way in which some parts of the show were edited. Firstly, some of the actual performances were cut down to twenty or thirty section with the majority of the programme filled with unnecessary VTs or clips of Louis dithering on decisions. This, after all, is a singing competition and I heard some excellent vocals at the live filming that were not shown post editing due to their short time slot. The other disappointment was that I felt myself being manipulated while re-watching with certain acts made out to be ‘good’ and ‘bad’ or loved and hated by the 5,000 crowd SSE Arena. Equally, Louis being made out as the incompetent judge is getting a little old. While he did struggle, the crowd were unbelievably harsh and he had a really difficult decision to make. The fact he bought acts back doesn’t show he has no idea what he is doing but rather that he is putting proper consideration in. At least he won’t be left, unlike Cowell, having to apologise on Twitter for making ‘mistakes’ at this stage of the competition in previous years. Having seen how events actually unfolded, the editing thus leaves much to be demanded. But, of course, X Factor also has some tricks up their sleeve and joining the 24 acts that have already made the judges houses will be four exclusive wildcards, one for each category. Alongside this, one fan favourite is also set to make a comeback, so when I say ‘Becky’ you say..

While the six-seat challenge did thus fundamentally deliver providing what is likely to be the most dramatic stage of the competition, it was let down this year by uncomfortable unnecessary begging and misleading editing. In fact, we are not left asking if this stage of the competition achieved its aims (which it certainly did), but rather is it OK to treat contestants so cruelly in the name of entertainment to increase ratings?

The X Factor continues to air on ITV until Christmas, with the judges houses’ stage airing this weekend (1/2 October).