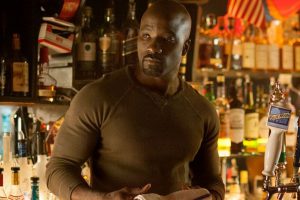 It’s been nearly a year since we last saw the eponymous man-of-strength in Jessica Jones, but it’s finally time to explore Luke Cage (Mike Colter) in this very own TV series. The thirteen-part season takes Cage away from his relationship with P.I. Jessica Jones, and forces him to face up to his future as a superhero. With Harlem in the looming shadow of the villainous Cottonmouth (Mahershala Ali), they need a hero. All of this is of course building up to The Defenders series, which will arrive on Netflix next year, and see Cage reunite with Jones, while teaming up with Daredevil and (the upcoming) Iron Fist as well. You can watch all thirteen episodes of Luke Cage from this Friday, 30th September, on Netflix.

Another returning show this week is Once Upon A Time, which is back for its sixth season on air. Due to the joys of Netflix (it’s giving us a lot this week, isn’t it?), we can watch it just one day behind its original US airing now. Things have once again taking a dark turn in the fairytale town of Storybrooke, with Regina (Lana Parrilla) struggling with her dark side persona, The Evil Queen. Jennifer Morrison, Ginnifer Goodwin and Robert Carlyle co-star. The first episode of Season 6, ‘The Savior’ arrives on Netflix on Monday 26th September, with episodes released weekly alongside the US.

Fancy a good ol’ autobiography to sink your reader’s teeth into? Well, if you got time between all the Netflix binging you’re gonna be doing this week, take a spin with Born to Run, new from – you guessed it – Bruce Springsteen. Proclaimed in the book’s bio, Springsteen wants to show you his mind through his writing, so prepare for an intimate experience all about the life of your favourite folk rock performer. It was written over seven years, and covers every inch of Springsteen’s life, from his childhood to his time on the road. Pick up your copy of Born to Run this Tuesday 27th September, from all good bookshops, released by Simon and Schuster UK.

And, finally, the football game you’ve all been waiting for is here – FIFA 17! With new additions such as The Journey added this year, it’s been the subject of much excitement with gaming and football fans alike, and you’ll be glad to know our writer previewed the upcoming entry to the franchise and called it a vast improvement on last year (see the On Edge: Anticipating here). But the proof is all in the playing, and you can grab your copy of FIFA 17 from Thursday 29th September, on Xbox, Playstation and Windows consoles.