Read more
You are at:Home»Culture»Review: The Full Monty at Bournemouth Pavilion
By Bruno Russell on September 23, 2016 Culture, Theatre
80%
80
Authentic

While it had its flaws, The Full Monty is an honest, ‘cheeky-chappy’ production, that you leave feeling thoroughly entertained.

In the beautiful Bournemouth Pavilion, The Full Monty has returned for its brand new touring production; packed full of cheeky innuendos and wolf-whistling, with a sustained storyline so you can engage with the characters constructed on stage.

Based on the 1997 film of the same name, the premise of the show is quite simple: six unemployed guys, down on their luck, decide to earn some money by becoming performers in a strip club. The show then follows the trials of the occupation, including having to learn to gather the confidence to ‘bear it all’, learning musical numbers, and having to balance home life with their ‘new life’ of entertainment. There is something fundamentally endearing to the story that makes you feel for the characters; by the end you really want them to be happy, confident and back on their feet. In many senses, I suppose, it comes across as a very authentic and honest production.

This authenticity, however, is as much the result of the charming and talented cast as it is the storyline. The stand-out performance surprisingly comes not from leading-man Gary Lucy (famous for his role as Danny Pennant in EastEnders), but rather from Reiss Ward, who plays Lucy’s on-stage son. He managed to present a convincing and charismatic personality that you instantly fell in love with. I found myself automatically wanting things to go right for him, and (spoiler) was happy when they did. He made my favourite scene, when he turned on Lucy, demanding that “he’d had enough of his bollocks”, he needed to get some balls, and strip! Specific praise does needs to be directed to Lucy though, who graced the show with his ‘cheeky-chappy’ persona in a very endearing way. 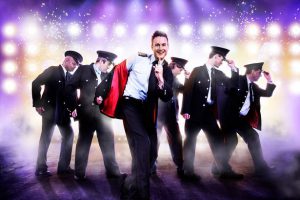 The hat most certainly stayed on [staycental.co.uk]

The highlight of the show, by far, was its perfectly pitched comic value, which had the audience in hysterics throughout, especially during the second act. This varied from clever and witty one line sexual innuendos (“Why are you called horse exactly?”), to some clumsily created, yet completely hilarious, dance routines, that reminded me of those acts everyone loves on Britain’s Got Talent for their sheer craziness. It might just be me, but seeing some 40-year old men attempting to booty shake and construct sassy dance numbers was inherently entertaining, and once again pulled off well by the talented cast. Indeed, the amateur dance comedy fitted incredibly well with the show’s ethos as it emphasised the normality of the plot and kept you ‘egging on’ the characters. By the end, you didn’t just want ‘The Full Monty’ to see Gary Lucy with no clothes on, but also because you’d followed these character’s journey, connected with them and almost felt a sense of pride in their achievements. It’s a very clever moral delivered subtly and comically. All this was epitomised by the thoroughly deserved standing ovation the cast received at the end of the show.

It certainly, however, was not a show without its flaws. The main one was a sense of monotony within the first act due to slow story progression. I understand this was done to build sympathy towards the characters and make them seem realistic, but I think this balance was somewhat overdone. Their realism was put across in a number of ways and was simply unnecessarily overplayed here. Equally the music was downplayed and ought to have featured more heavily. Despite the end sequence, and a few very short sections, no other music featured and there were no whole dance numbers apart from the closing section. As a result it became extremely dialogue heavy in sections where I felt a little more ‘light’ entertainment would have been beneficial. The ‘full frontal nudity’ was only for about ten seconds, a little ass cheek, but more as an entertainment commodity. It’s cheeky and fun, and perfect for the majority middle-aged audience, but is just not wholly in keeping with the production’s description of the show.

But, though this sounds critical, the show overall was still a big success. Alongside the charismatic cast and comical plot, the special effects and set creation were also stunning. While the backdrop was sustained throughout, it was well adapted to suit a range of different scenes and settings from a run-down mill, to a nightclub back-alley, and a job centre. This was well-employed alongside some surprising deployment of special effects, which included sparks flying in the mill. It would be a stretch to say it added a sense of drama, but it entertained the audience nonetheless. The other nice addition was a deeper exploration of the emerging gay relationship between Guy (Chris Fountain) and Lomper (Anthony Lewis), as Guy helping Lomper realise his sexuality and asking him out for a drink was one of the sweetest moments of the show. It’s one of those ‘get in there my son’ moments, that was very well delivered.

The Full Monty is a well-created, well-rehearsed comical and ‘real’ production, with a sense of real earthy authenticity. Though there are things to improve, I’d certainly recommend going to see it for an entertaining night out!

The Full Monty is at Bournemouth Pavilion until tomorrow, Saturday 24th September.