Devil’s Night is slowly approaching, and so is the date of the new American Horror Story. Usually, for AHS at least, the series’ premise will be released a whole month ahead of the usual schedule; but not this time. The subtitle, and with it any indication of what’s unfolding in Season 6, is still a closely guarded secret. With so much confusion ahead of release caused by a small armada of teasers already out there, this is an especially hellish year for AHS fans, who are obliged to question their very sense of being in the face of such ambiguity. Fear not, for having trawled through all the theory, here is an attempt at a half lucid, probably semi delusional, response.

Several theories have been discounted for appearing to be the brightest shade of red herring i.e. the website claiming that they knew that the theme would be Forest and the title AHS: The Mist appearing on Rotten Tomatoes for several hours, but who knows. This seems to be a make it or break it season, and with a tighter cast, a theme shrouded in mystery, and here’s hoping all the build up will be worth it. The end of Hotel was an anti-climax of disproportions; the teeming mess and density of the plot was just too huge a task for it to reach a satisfying ending. The last episode dragged as the writers clamoured to conclude everything.

The teasers are certainly making the right noises, but only time will tell. And please no more abusing the ghosts’ prerogative in the horror genre; no easy and inevitable way out followed by immortality, now both Murder House and Hotel have been there.

Here are the most convincing theories, in order of their likeliness.

The cradle teaser that may or may not have spelt the word ‘PIG’ was written in blood at one of the most famous murders committed by the ‘family’ of Charles Manson. They were a group of hippies in the 60s who committed mass murder under his hypnotic hold, and although the cult and antichrist themes may fit with the new overall theme this year, it doesn’t feel quite right. 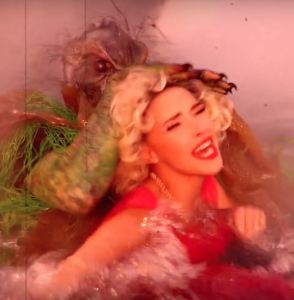 Although this theme sounds interesting, it seems playful but altogether misleading. There is a new Experience coming to Universal Studios literally called Halloween Horror Nights – Hollywood, but that would be too coincidental for my liking.

Many vouch for the theory that the series will take place near the early Roanoke settlement and thus depict the mystery of the Lost Colony. However, the best policy is a policy of disbelief, and the supposed leaked photos from on set with the word ‘CROTOAN’ carved into a tree could just as easily be faked on the show’s behalf. Unless the mystery behind the missing settlement is of alien origin within the AHS universe (something I am advocating for the new series, sorry) it seems unlikely, as the show is apparently predominantly going to be set in the present, with only brief trips into the past – unless it’s going to be another ghost story. Either way, that would challenge Billie Dean Howard’s story that an elder had banished them, back in Murder House.

This feels like the most sensible theory, but it all, again, hinges on the words of the show’s creators, who said the plot would concern children. A boarding school was mentioned several times in the season five finale, concerning John Lowe’s daughter and Will Drake’s son. If this academy is the new home of AHS, the teaser revealing that all the series will connect could come true. The antichrist from Murder House, the abducted children from Asylum, young witches from Coven, freaks from Freak Show, and the lost children from Hotel, all getting chummy.

Although the aliens were a feature many of the fans didn’t like, validating their appearance from back in season two may give credence to the show’s past and future. It is children that the aliens were studying in season two, and who they may have given abilities to. And there was alien technology present that was never explained, used by that naughty Dr. Arden. If this school did exist, a shelter for all the wayward strays, albeit white haired vampires or abducted alien babies from the Roanoke Colony, they could potentially connect all the dots, and unleash new creepy entities into our world.

Maybe Billie Dean Howard will turn away from ghosts after her night on Hallow’s Eve at the Hotel Cortez and turn instead to abduction stories. Maybe she’ll come across the antichrist from series one living in this remote orphanage for special children. Tate Langdon’s infamous whistle could have passed from father to son and morphed into a child’s hum, one that can be heard in a few of the teaser trailers. Maybe Jessica Lange will come full circle and end her AHS career by returning to her first role as Constance Langdon, only to be killed off by her grandson moments after the start of the episode.

After the recent success of Stranger Things, a young bunch of child actors as leads, along with the series regulars, doesn’t sound like such a bad move. However, this could all be a moot point. This might be one big ruse; from the red herring teasers to the sweepstake that AHS are running in the US, awarding a car to the winner. Maybe even the winner won’t be a winner. Maybe some of this is true, maybe none of this is true. All that can be confirmed is written in bold below.