Read more
You are at:Home»Culture»Review: Macbeth at The Globe
By Olivia Krauze on September 9, 2016 Culture, Theatre
60%
60
Troubled

Both dark and experimental – but for the most part, not to great effect.

The Globe’s current undertaking of Shakespeare’s bloodiest play comes as one of the last instalments of the theatre’s ‘Wonder’ season, the first under the artistic direction of Emma Rice. The production is both dark and experimental – but for the most part, not to great effect.

The opening of the black-cloaked ‘weird sisters’ ominously rising from the ground and proceeding to perform a routine with decapitated limbs scattered across the stage was eerily promising. The witches’ following manipulation of the Captain, apparently bringing him back from the dead, got me even more excited, in anticipation of an interesting physical theatre twist on the Shakespeare classic. Yet the excitement was premature. The remaining physical moments were scarce and mostly uninspiring – the ending saw merely a repetition of the witches’ opening routine, acting as a framing device. And why there were four witches, instead of three, really is a mystery. 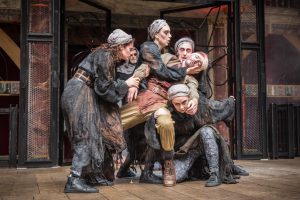 Another confusing decision from director Iqbal Khan, which needed much better execution, if it was to be executed at all, involved the inclusion of a little boy in the cast. Since the Macbeths’ lack of an heir is key to the play, I assume this to be the ghostly presence of a child which the couple could never have, rather than their literal child. However, if this was in fact the intended meaning, it was lost, for actors visibly took notice of and interacted with the boy. He was harmless and lacked purpose on stage – it would have been far more interesting to see him in a more haunting light, playing with the subversion of such a symbol of innocence in a way more appropriate to the play. (Granted, he looked utterly adorable in his little suspenders and donning an over-sized military hat in the bows, but this is simply not justification enough.)

Luckily, despite many of the questionable directorial choices, the production was saved by some powerful performances from its cast. Ray Fearon’s Macbeth was all that one might expect: a bold, ambitious, and eventually a tormented man, not that this reduced his very convincing performance. Tara Fitzgerald was a vision in flattering scarlet as Lady Macbeth, an apt costume choice symbolising her danger, passion, and guilt all at once. She was intemperate and insatiable, covering Macbeth with ardent kisses and constantly touching him – a real Cersei Lannister type (minus the incest). Her descent into madness was shown by Fitzgerald in an unusually controlled way: more like the repetitive routine of an OCD sufferer than a crazed murderess, but refreshingly chilling in its simplicity. 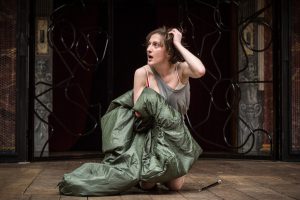 Yet it was Jacob Fortune-Lloyd’s Macduff which shone through as the performance of the night. Simply watching him stand still and speak Shakespeare’s words with a flawless Scottish accent, so full of weight and emotion, was remarkable. Praise must also go to Freddie Stewart (Malcolm) for a strong performance, thoroughly appropriate for a more stable and solemn future royal. On the other end of the spectrum, Nadia Albina (Porter) should be praised for her ability to bring humour to such a dark play, having the audience eating out of her hand with topical ad-lib jokes on Trump and the EU referendum.

Acting aside, it would be unfair to say that the production did not have some fleeting instances of interesting direction from Khan. The apparition of Banquo, disfigured and disturbing under a taut black sheet, the witches’ speeches sung, rather than spoken, to haunting music, the unsettling image of Lady Macbeth delicately picking up her sandals by the straps so as not to ruin them with Duncan’s blood – all visually and aurally memorable moments. However, with a rather dragging pace, and the jarring effect of some of Khan’s more confusing decisions, this is far from The Globe at its best.

Macbeth is showing at The Globe Theatre, London, until 1st October 2016. Tickets can be purchased here.