Read more
You are at:Home»Culture»Review: The Great British Bake Off (Series 7, Episode 1)
By Carly-May Kavanagh on August 25, 2016 Culture, Television

I don’t think I was entirely prepared for just how much I’d missed The Great British Bake Off. As soon as I heard two contestants say they’d had “crazy dreams about cakes chasing me”, and “I have shouted at a pie”, I knew it was going to be an incredible series.

I thought nobody could live up to my favourites from last year, Tamal and Nadiya. But somehow, unassuming and hilarious, 66 year old ex-headteacher Val stole the show for me, with her baking exercise, and actually lifting the cake to her ear because they apparently tell her when they’re done. Incredible.

The episode seemed so much more dramatic than I remember any first episode of Bake Off ever being, with half of the contestants covered in plasters during the first challenge, baking a lemon drizzle cake. Halfway through (“One hour to make your driz the shiz”), people were starting their cakes again. Paul was telling them to amend their recipes. It was tense, people were sat in front of their ovens – it was baking chaos. And of course, there was a gin cake to appeal to Mary Berry. 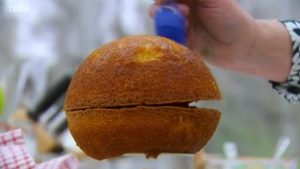 The innuendos were scattered throughout, with sex toy jokes from Sue before we’d even started, to what will surely become a classic Bake Off quote – “I like the flavour of a Cox.”. The words “penetrate” and “moist” were said too many times for anyone to be comfortable with, I couldn’t quite believe that this was on the BBC. But it’s baking, so it’s okay. Mary approves, but not of Paul dunking his jaffa cake in tea.

Yes, jaffa cakes. In Cake Week. If Queen Mary says they’re cakes, that’s it decided, so take that Mr Tax Man. I’m not quite sure how any of them made it to GBBO without knowing what a jaffa cake looks like. Who puts a jaffa cake upside down?! It was even more chaotic than the lemon drizzle. Paul was, again, in classic schoolteacher mode – “that would be a ‘see me'”, and “uniform…ly bad”. He’s been working on those all year.

Everyone feels the tension watching the episode, and everyone turns into a Master Baker who knows everything about baking ever. When I see them running to the freezers, carrying their baking, I can barely breathe for how terrifying it is. They’re already on their second bake try and now they could drop it; I don’t think anything could be scarier than that. Favourites so far are Selasi, who somehow maintained his chill throughout, and Val the dancer. If only I had half of Selasi’s calm nature… The mirror cakes seemed to get to a few contestants, with Swallow Lady talking about swallows a lot, and Benjamina crying over her glaze. I wonder if other countries take baking this seriously. And I’m supporting Val for the win.

The Great British Bake Off continues next Wednesday, BBC One at 8pm. Catch the first episode on the BBC iPlayer now.