Read more
You are at:Home»Culture»Flashback: An Ode to How I Met Your Mother
By Sophie Trenear on August 19, 2016 Culture, Television

‘Kids, I’m going to tell you an incredible story. The story of How I Met Your Mother’

Picture this: the year is 2005, London has just won the right to stage the 2012 Olympic games, YouTube has just gone live, and you can hear the familiar sound of Franz Ferdinand blasting from any speaker in a five-mile radius. But there is a far bigger, far better introduction on the horizon. Friends aired its final episode in May of the previous year and so far, we are just craving some more friendly-bunch hijinks and action. What is a world without the witty quips and romantic tension of a group of 30-something New Yorkers, enacting the same scenarios again and again for the same four hours every day over and over on E4?

The solution? Enter stage left: Craig Thomas and Carter Bays, creators of CBS sitcom How I Met Your Mother.

On September 19th 2005, the pilot episode of the brand new show was broadcast to a nation fed for months with rumours that the programme is “just a newer, crappier version of Friends“. In fact, I distinctly remember the voiceover for the advert remarking that “it’s basically new episodes of Friends, but without boring, ruddy Ross”. So here we have it – on one hand, a world excited for their cravings to be dispelled and dissipated with a new batch of American characters hungry for love, sex and drama – but on the other hand, a number of devoted Friends fans still grieving the loss of their beloved sitcom and spitting out angry words at any potential copycats. Conflicted, as if the drama is right here in the real world. Claws are out, kitties. 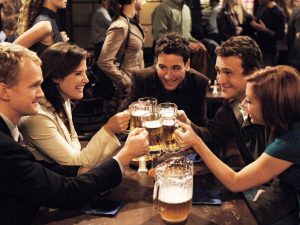 The truth is, though, neither groups turned out to have the last word. Yes, both shows have a gang that hang out in certain public food/drinks establishments, are with each other for a portion of the day bordering on the unhealthier side of ‘hanging out’, and have romantic plotlines capable of filling an evidence board, complete with intersecting thread lines. Both programmes went really quite silly as the seasons went on. And let’s face it, Rachel and Robin have, romantically, practically the same function. However, although the similarities do go on, the two programmes evolved into very different things.

How I Met Your Mother is a unique show. Its premise is unique – Ted (Josh Radnor) recounts from the year 2030 to his two kids how he met their mother, beginning 25 years earlier when he meets apparent dream girl, the scotch-drinking, gun-loving, hockey-fanatic, all Canadian Robin Scherbatsky (Cobie Smulders) – who, in plot twist numero uno, is definitely not the mother. Cue all things awkward, shocking, heartwarming, downright heartbreaking sometimes (I’m looking at you, ‘Symphony of Illumination’), but always laugh out loud funny.

And somehow HIMYM managed to maintain just the right balance of wit, fun and banter with things more deep, more solid, more memorable; something which other sitcoms of recent years just haven’t been able to get right. New Girl, Brooklyn Nine Nine, The Big Bang Theory, even Britain’s very own Fresh Meat; not one of them comes anywhere near to How I Met Your Mother’s talent for combining depth with humour with a genuinely heartwarming group of central characters whose developments, particularly those of Robin and Barney Stinson (Neil Patrick Harris), are stunning. 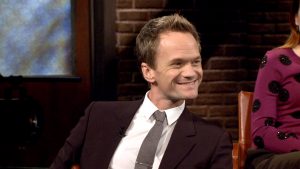 And speaking of Barney – who can say there’s been a better written character in the last decade of American sitcom history? Yes, he begins as a misogynistic, selfish, sleazy prick, and a part of us all undoubtedly hates him for that, but boy does he get better. It’s a character development to rival that of Mickey Smith from Doctor Who – as long as we all quietly forget the last two episodes – and it’s one which was the most surprising and the most entertaining to watch, to be a part of, for those nine years. And let’s not forget that some of the best lines from any TV show have inarguably come from the mouth of Barney Stinson, or should we say – Swar – wait for it – ley.

I’ve watched How I Met Your Mother the entire way throughout five times now, and I’ve often depended on a select few episodes to get me through tough times, good times, fun times – all times, basically. HIMYM is never not perfect for any time, whatever it is. Dealing with a break-up? ‘Farhampton’, Season 8, Episode 1. Homesick? ’43 Minutes’, season 7, episode 14. Want to cry some good ol’ happy tears? ‘Last Words’, season 6, episode 14. How I Met Your Mother, for nine full years, was the voice for the successes and pitfalls of careers, dating and friendships, and for nine full years I, along with a world of others, adored it. Over two years on from the last ever episode and I still absolutely, with all my heart, adore it. But, then again, let’s steer clear of talking about that last episode, eh?