Benedict Timothy Carlton Cumberbatch (born 19 July 1976), is an English film, theatre, television and radio actor. His fame has grown rapidly since he landed the role of Sherlock Holmes in the TV series Sherlock (2010), and he’s now well-known for his movie career (The Imitation Game, The Hobbit, Star Trek: Into Darkness) – but most overlooked is the major contribution Cumberbatch has made to the British acting stage.

His career in theatre started in 2001 at the Open Air Theatre at Regent’s Park. Part of the New Shakespeare Company, Cumberbatch first appeared in A Midsummer Night’s Dream and Love’s Labour Lost playing Demetrius and the King of Navarre respectively. The following year at the same event, he played in three different productions of the New Shakespeare Company: Romeo and Juliet (Benvolio), As You Like It (Orlando) and Oh What a Lovely War. In addition to his Shakespearean roles, he performed in a 2003 production of The Lady From the Sea, a mystical and dark Norwegian play written by Ibsen, directed by Trevor Nunn.

Cumberbatch’s theatre career gained some recognition for his role as George Tesman (yet another character with high intellect) in Hedda Gabler (2005), another Ibsen play, for which he was nominated for an Olivier Award for Best Performance in a Supporting Role. This also marked his debut on the West End stage. After playing in some other plays at the Royal Court Theatre, he appeared in the revival of Terrence Rattigan’s dark play, After the Dance (2010), as David Scott-Fowler, a drinker who treats everything as trivia, and pushes his wife to kill herself when he falls in love with another woman. The show won 4 Olivier Awards, met with mass critical and commercial success.

An intriguing role for Cumberbatch was his part in Frankenstein (2011), an adaptation of Shelley’s famous novel, in which he swapped between playing Victor Frankenstein and his Monster each night with Johnny Lee Miller. The play is constructed in two parts – the first one focused on the Creature, its birth, its way into the complexness of life, while the other follows Frankenstein’s rise and fall as his path crosses once again with his creature. It was this outstanding performance that showed all the genius of Cumberbatch’s acting. On one hand, he could act with a physical and destructive force which also had an innocent confusion. On the other, he could play an arrogant man that must face the consequences of his actions. He beautified the horror behind this story, and lifted the two-dimensional bias of Frankenstein and his creature by acting the complex psychology behind them. Both visceral characters were performed with the most sincere style. For the role, he received Best Actor in 2011’s Critic’s Circle Award and the Evening Standard Theatre Award, and 2012’s Olivier Award. The play was even broadcasted to cinemas with the National Theatre Live, and is still being shown at Halloween years after. 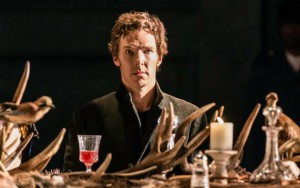 As the movie career of the actor became more important, Cumberbatch had less time for theatre, returning though for an evening in 50 Years on Stage (2013), the event for the Royal National Theatre’s 50th anniversary, playing Rosencrantz in a scene of Tom Stoppard’s Rosencrantz and Guildenstern Are Dead. More significantly, the Sherlock actor came back in the spotlight for twelve weeks in August 2015 to portray the eponymous Hamlet, Shakespeare’s timeless character, at the Barbican Centre. From the incredible sadness of grief, he could interpret the ongoing madness that ate up Hamlet, while evolving the character in his resolution and bitterness, and then finish magnificently with an athletic prowess during a fight scene, just before the Danish Prince breathed his last breath. Due to his growing popularity, the show was sold out in only seven hours. Undoubtedly, this was one of his best performances, for which he was awarded Best Actor at the ‘What’s on Stage’ Awards.

Since then, Cumberbatch has been absent from the stage. He hasn’t stated any indications on when he will return, but it is clear he enjoys British theatre. While we wait, fans can enjoy a new series of Sherlock, arriving in 2017, and his performance as the titular Doctor Strange in the eponymous movie later this year.

Performance to watch: His 2011 performance of the Creature in Frankenstein with the NTLive Encore Screening.